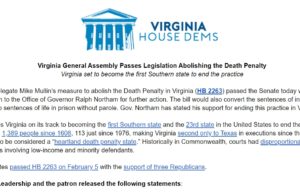 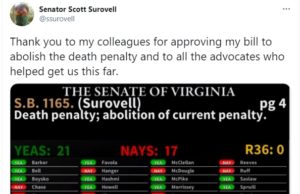 lowkell - February 3, 2021 0
See below for video of the debate and vote, as the Virginia State Senate voted a few minutes ago to abolish the state's death... 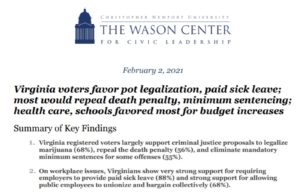 lowkell - February 2, 2021 0
A new poll is out this morning from the Wason Center for Civic Leadership at Christopher Newport University, and as usual it shows that... 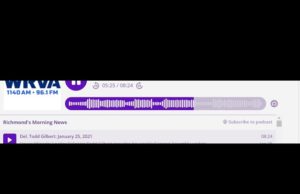 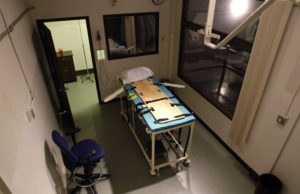 Is It Time for Virginia to Repeal the Death Penalty? In...

Cindy - December 28, 2020 0
by Cindy In light of the eleventh-hour killing spree conducted by the lame duck Trump Administration and its Department of “Justice,” it’s a good time... 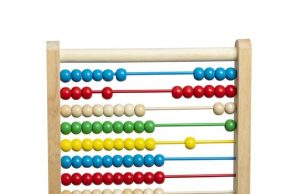 Cindy - February 9, 2020 2
by Cindy A fiscal impact statement is a short document that accompanies a bill filed in the General Assembly. It’s meant to describe the costs... 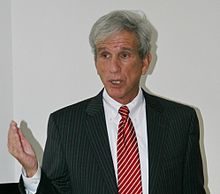 kindler - June 5, 2019 1
by Kindler Here’s one more reason to replace Senate Democratic Leader Dick Saslaw with Yasmine Taeb in the June 11th primary: Saslaw is a...

Scheduled Virginia Execution Based on False and Recanted Testimony

Audio: Add This to the Long List of Reasons Why Dick...

lowkell - March 14, 2016 0
So...according to our old pal Senate Minority Leader Dick Saslaw: You've got to earn your way into that electric chair or on that gurney. They've...

Transcendence for All Seasons

Mine was no ordinary Thanksgiving. It was my first following the death of my mother three months ago. I have also lost a friend and my favorite uncle. Last week another friend hovered between life and our loss of her. Sunday she passed away. But a story, juxtaposed to this week of heavy-hearted sorrow moved me in ways that, however briefly, made my spirit soar. It is the story of love and overcoming overwhelming injustice. And it is the story of forgiveness and transcendence.

I saw this. Story on "Democracy Now." Sonia (Sunny) Jacobs wed Peter Pringle this past week. This is a different story of life and death (and love) that could make you more thankful than ever, as it did me. They each spent a decade-and-a-half on death row-for crimes they never committed. Sonia's first husband was even executed before he was exonerated. His was the famous case whose head caught fire during his electrocution.  You probably read about it. How do we live with ourselves, I wonder?

The story of how Sunny endured and even grew during her horrendous isolation in solitary confinement, the only woman in the US on death row, is one about truly loving woman, embracing life in all its sometimes awfulness, and staying strong both physically and mentally.