Major Scandal at GMU as Kochs’ Corrupt Influence FINALLY – After...

lowkell - April 30, 2018 4
A major scandal has broken out at George Mason University, and I thought it was important to comment on it. Specifically, see Saturday's Washington...

“Kochtopus” Goes All In for Their Slimy Soulmate, “Enron Ed” Gillespie

lowkell - September 6, 2017 4
This is appalling but not at all surprising. Americans for Prosperity today announced a seven-figure ad buy to support its multi-million-dollar effort urging Virginians to... 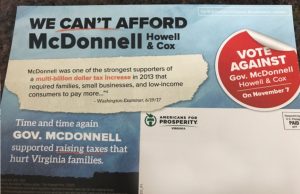 lowkell - August 2, 2017 1
It looks like our old friends the Koch brothers -- via their far-right propaganda/"astroturf" operation, the Orwellian-named "Americans for Prosperity" -- have taken a... 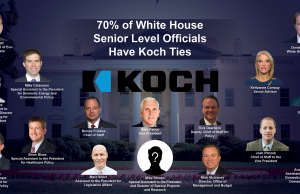 lowkell - June 20, 2017 0
A forthcoming book by the Checks and Balances Project - “The Disrupted: The Definitive Investigation into Koch Self-interest, Infrastructure and Strategies to Control Government" - looks...

The Koch Brothers are Trying to Buy Virginia.

Kenny Boddye - May 12, 2017 2
Yesterday, just about every Democrat in the commonwealth likely received the following email from the Democratic House Caucus: "We just got some breaking news out...

Tom Steyer vs. the Koch Brothers: Obliterating the False Equivalency The latest fashion among right-wing trolls?  Attempt to halt all criticism of the Koch Brothers by bringing up the name of environmentalist billionaire Tom Steyer.  We have our billionaire political donors, you have yours - what's the difference?

1) Making money vs. losing it: As Steyer puts it, the Kochs' priorities "line up perfectly with their pocketbooks - and that's not true for us."

If you want to know why the Koch brothers went to the bother of spending hundreds of millions of dollars to create a vast infrastructure for casting doubt on climate science, well, it's not too hard to find a motive.  Just check out their stake in oil and petrochemicals, investments whose value is likely to go down the moment we put a price on carbon dioxide emissions.

They've clearly leveraged that investment with the millions they've spent indoctrinating rubes through their multitudinous Tea Party organizations such as Americans for Plutocracy (er, I mean "Prosperity").  Convince an army of ignorants that climate change is a Vast Conspiracy of Evil Scientists and you can spend more time relaxing at the golf course knowing that your oil and coal investments are safe and sound. A: How do you stop the U.S. from taking action on a global threat whose existence has been documented through the peer-reviewed, published research of 97% of the scientists who've studied it?

B: Label all attempts at dealing with this issue a "tax" and get soulless politicians to pledge to oppose any action.

Such has been the strategy of the Koch Brothers in directing their wholly-owned subsidiary, the Republican party. Their "No Climate Tax" pledge has attracted the signatures of 411 political hacks, only 3 of whom were Democrats -- and every one of whom needs to be politically targeted with the goal of ending their political careers, for the sake of a healthy future for our kids.

You can see the list of signatories here. I've listed Virginia signers below, to put all our allies on notice of the need to work hard to send these losers into involuntary retirement.

- Note the presence of Republicans like Lt. Gov. Bill Bolling and Rep. Scott Rigell, who have sometimes been alleged to be "moderates" -- but clearly not when the money and support of the Koch brothers and Fossil Fuel Lobby are at stake.
- This list underscores the importance of finding strong Democrats to run against potentially vulnerable Republicans on this list, like Sen. Jill Holtzman Vogel.
- Interesting that a coastal community like Virginia Beach would actually have a City Councilwoman (Rosemary Wilson) willing to let it bear the ravages of sea level rise and more violent and frequent storms.

And here is the Commonwealth's Climate Rogue's Gallery: