“This is white male privilege rearing its ugly head from behind...

Blue Virginia - September 25, 2017 4
by Taikein Cooper Friday night, I was troubled by the words of Donald J. Trump. While that is not a novelty, this time was different....

Monday News: NFL Sacks Trump; “A Rebel, a Warrior and a...

lowkell - September 25, 2017 5
by Lowell Here are a few national and Virginia news headlines, political and otherwise, for Monday, September 25. Protests sweep NFL as Trump doubles down... 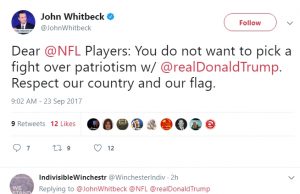 Gov. McAuliffe: Just Tell Dan Snyder Where to Shove It (His...

lowkell - August 6, 2016 2
Yesterday, we read that the Virginia governor says state is ‘in very serious negotiations’ for a Redskins stadium: “I view this as a Virginia team,”...

Andy Schmookler - July 2, 2016 0
This piece differs from my usual op/ed offerings that appear in the newspapers in my conservative congressional district (VA-06). Usually, my columns are designed...

lowkell - May 19, 2016 4
Unlike ideologues (e.g., climate science "deniers") immune to empirical evidence, I've always considered myself first and foremost someone who looks at (and respects) data,...

All the get rich land development schemes that characterize Richmond City high finance remind one of the common flights of fancy on The Honeymooners. One difference, though: Mayor Jones is banking with other people's money and trust. After making an effort to gain clarity on the DPVA's financial health, there is nothing to show but despair. Appropriate since Jones and his recent predecessors as Chair have all left the political party borrowing against time while concealing the bottom line. Requests for financial statements have been ignored, so the depth of the hole remains closely held. Miraculously, during six years with a Democrat in the White House and in a state with two Democratic United States Senators plus the election of Democrats to all three statewide executive offices in the past year, time has run out on the Party's mortgage.

A big portion of the DPVA party leadership's responsibility is to provide the hired staff with sufficient resources to run a statewide political party. But Jones, who fought through charges that he doesn't represent the party's principles of equality and equal rights to gain the position of Chair, has been an absentee landlord. The infrastructure, physical and fiscal, has continued to decay since his ascension to the post. He has consistently missed meetings and party conference calls. E-mails go unanswered. The excuse is always that his responsibilities as a pastor and Mayor consume his time. Those responsibilities did not preclude him from interfering in an intra-party state Senate primary race (his influence proved ineffective). Now he's on the verge of missing the payment on the DPVA's "digs" on Franklin Street in Richmond.

If Hannah Graham Had Made It Home

Possibly only because Hannah Graham disappeared did we learn she was a victim of foul play. Statistically, 1,137 other American undergraduates were raped that day. Why aren't they in the headlines? Bet you if four UVA football players had gone missing in five years, those cases would have been solved.

There is every disincentive for victims of rape to report their assaults. When they do, they invariably become victimized again. The deck is stacked in favor of assailants. You'd think that in the enlightened environs of college campuses this would not be so. When will the discussion about violence against women change from women avoiding potential danger to men behaving with respect?

There is nothing positive about this to learn from the leadership on Virginia's campuses. And there seems no accountability for leadership failures. The President of James Madison University (JMU), at a minimum, provided cover for the malfeasance in his administration's handling the Sarah Butters sexual assault, deflecting blame onto the victim. Governor McAuliffe plastered over the scandal of Title IX investigations across Virginia by appointing a task force to conduct a "top-to-bottom" review of procedures for investigating sexual assaults and resolving complaints at public colleges and universities. You can conduct the tightest investigations in the universe and it won't prevent the next broken life. Nice try Governor, but this won't change the climate on campuses. You want Presidents of Virginia's universities and colleges to be invested? Fire one; start with JMU President Alger who allowed Sarah Butters' dignity to be trampled upon.

The overuse of football as a metaphor for life can be irritating but sadly in the area of leadership, some college coaches are way ahead of their "bosses." Last July after Coach Charlie Strong started kicking players off of his team for their behavior toward women, ESPN commentator Rod Gilmore was asked about football players' violence against women. Gilmore, a former Stanford football player, accomplished attorney, and ESPN analyst praised Strong for doing the right thing.

"He's one of the few people who takes a strong stand against violence against women. I mean he comes out on day one and says that if you don't treat women with respect, you cannot play for him. And he's new at Texas and he backed that up today. But seriously, across the landscape of college football, we don't take it seriously enough." - Rod Gilmore on ESPN