The Battle for Our Democracy this Memorial Day

Andy Schmookler - May 29, 2017 0
On this Memorial Day – to honor those who have sacrificed all to defend our American republic – we are compelled to confront the... 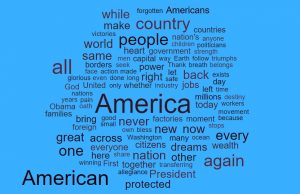 lowkell - January 20, 2017 2
I put together word clouds of the first inaugural addresses by Presidents Trump, Obama, Bush 43, Clinton, Bush 41, Reagan and Carter. To the...

lowkell - May 4, 2016 5
It's been over 50 years since Ronald Reagan's famous "Time for Choosing" speech. And while almost everything Reagan said in that speech was wild,...

Military Retirement Provisions Should Remain In the Budget

What a distraction, this military pension debate; pandering to a small entitled constituency and using misdirection to play to an emotional and uninformed public. The discussion is superficial. Always missing is the financial rationale for the military retirement system. This change is being called a cut. But is it really?

When you compare the retirement benefits of a Viet Nam era military retiree, even with the cost of living (COLA) adjustment reduction of a percent a year, at current pay scales very few future retirees would receive less compensation in real dollars than those who retired in 1970. In fact, the vast majority would receive significantly greater compensation, not only after the COLA is restored after age 62, but even during the years of the COLA adjustments. In real dollars, enlisted personnel start retirement at compensation amounts that are 12 to 19% higher (commissioned officers 5 to 6% greater) than their Viet Nam era contemporaries. And job prospects are significantly better for these retirees who are better educated and connected than their predecessors ever dreamt.

Fewer than 10% of all veterans are military retirees. Congress does little more than pay lip service to the remaining 90%, many of whom go unacknowledged beyond gratuitous platitudes during campaigns. With this approach, those whose service resulted in debilitating injury often end up relying upon the kindness of strangers.

Although politicians frame this as a veterans' issue, it isn't. Consider that not many military veterans are retired. Next, the pension program in place is a conscription era relic the Reagan administration tried to reform. The recent aborted attempt by Republicans to hold the debt ceiling hostage leveraging military retirements failed because members of Congress know that even "reduced," this retirement system is more than generous.

That's not a judgment; just the search I used to find the story after I watched a report on a local television station. Part of the post-election theme which includes: "Welcome to Jimmy Carter's second term" and laying off employees with Obama bumper stickers. Yes, Virginia, these conservatives hate America.

I hope the guy in Bedford who closed his jewelry store and posted signs in the windows understands the concept of an archive that will be permanently fixed to his genealogical record. And I know the other jewelers in town had no objection to his exercise of free speech and disassembly. Plus it is clear he doesn't like America because it is not the America he imagines our forefathers envisioned.

The message that Obama's reelection would hail the second term of Jimmy Carter never resonated, but Neal Boortz is counting on it carrying sales of his next book. He was wailing away while waving that flag the other day. Unfortunately Neal and his followers never understood that Carter's second term probably would have been similar to Reagan's economically, including all the deficit spending but without the breaks for the rich. In fact, I have always argued that if Alfred Newman had succeeded in 1980, economic recovery was already on the way by the time the eight years of Republican malfeasance that preceded Carter had been abated by sounder Democratic policy. Reagan was a right time and place guy and that is about all, except for some amount of personal warmth that Carter couldn't generate even wearing those stupid Mr. Rogers sweaters.

And you couldn't avoid a gag reflex from the anecdotal stories on the other right wing shows that had employers calling in employees the day after the election and letting them go because they had to get under the threshold of 50. Of course, they snickered about the "coincidence" that these same employees were the ones that had Obama stickers on their cars and needed a "lesson" for their support.

That really sums it up: These conservatives hate America and want to punish those of us who love and understand her. They want to invalidate the very thing that makes America strong. They would rather America fail than for it not to conform to their image, which is clearly one of intolerance and intractability.

In this morning's New York Times, former Reagan Administration OMB director, David Stockman, rips Republicans a justified new you-know-what.  The cause of Stockman's righteous rant?  How about the fact that Republicans - and a few foolish, craven, pandering Democrats - are calling for continued tax cuts for the wealthiest Americans, even as our nation's public debt "will soon reach $18 trillion." According to Stockman, Senate Minority Leader Mitch McConnell's stance on this issue "puts the lie to the Republican pretense that its new monetarist and supply-side doctrines are rooted in its traditional financial philosophy."

In other words, so much for traditional, Republican, balanced-budget, fiscal conservatism. Instead, according to Stockman - and he's absolutely right about this, of course - today's GOP has subscribed to an approach that involves "little more than money printing and deficit finance - vulgar Keynesianism robed in the ideological vestments of the prosperous classes."  And that, in Stockman's view, has both "made a mockery of traditional party ideals" and "led to the serial financial bubbles and Wall Street depredations that have crippled our economy."

I strongly urge that you read the entire article, including Stockman's appeal to Republicans that "the old approach - balanced budgets, sound money and financial discipline - is needed more than ever."  It's a refreshing and important reminder that today's Republican Party wasn't always the crazy hybrid that we see today: theocrats, anti-science and anti-reason "know nothings" like Ken Kook-inelli, foreign policy super-hawks like Dick Cheney and Newt Gingrich, supporters of enormous corporate welfare (to whatever their favorite industry happens to be - oil, agriculture, etc.), and supply-side/la-la "Laffer" land loonies on budget matters (translation: spend and borrow, cut taxes for the rich, launch wars that aren't paid for, repeat until we all go bankrupt).

Click on the image to "embiggen."  In short, according to Gallup, Barack Obama's approval ratings are almost exactly tracking Ronald Reagan's approval ratings at the same points in their presidencies. Note that Reagan was faced with a nasty recession, as is Obama. Also note that Republicans lost a net of 27 seats to the Democrats in the 1982 midterm elections. I'd be very happy if Democrats only lost 27 seats this time around. Finally, I'd point out that Ronald Reagan's approval ratings rebounded, along with the economy, and he was reelected in a landslide in 1984. Past as prologue?