Republicans are betting heavily this election year on candidates from the business world – e.g., for Senate, Carly Fiorina in CA, Linda McMahon in CT, and Bill Binnie in NH; for governor, Meg Whitman in CA, Rick Snyder in MI, and Charlie Baker in MA; and this Tuesday, Tim Burns for John Murtha’s House seat in PA.

Putting aside whether the recent shenanigans of corporations from Goldman Sachs to BP may tarnish this strategy, I’d like to ask an even more important question: what is the track record of businessmen who become political leaders?  Certainly there are businessmen who make admirable contributions to government, like Virginia’s own Mark Warner.

But there’s a very important lesson of history that most people don’t know – namely, that SOME OF THE MOST DISASTROUS LEADERS OF THIS CENTURY HAVE BEEN FORMER BUSINESSMEN.  I’m not even going to get into our first MBA president, George W. Bush, both because his Reign of Error is so fresh in our minds and because, frankly, he was a lousy businessman too.  No, in this diary I’m going to focus on three successful businessmen-turned-leaders who left incredible trails of destruction behind them – Herbert Hoover, Neville Chamberlain and Robert McNamara.  And there is critical evidence that their business experience was a major contributing factor in their spectacular failures.

Herbert Hoover, our 31st president, is a particularly important example because we always hear the line that cleaning up our economic mess is a job for a seasoned businessman.  It didn’t quite turn out that way for the president who let the Great Depression happen and worsen on his watch.

Hoover’s background was as a mining engineer and executive.  He attained fame, and showed the best of his business and logistical skills, as the “Great Humanitarian” who organized very successful relief operations for the devastated countries of Europe after World War I.  He then served as the exceptionally pro-business Secretary of Commerce for ultraconservative presidents Warren Harding and Calvin Coolidge.

And yet the same skills that elevated him to the presidency did not seem to work too well in that position.  As Jonathan Alter wrote in The Defining Moment,

As a mining executive and large-scale relief organizer, he could bark orders without worrying about the give-and-take of politics.  But the presidency required supple skills that were beyond him.

Hoover could not launch what was needed – a New Deal – because that would’ve gone against his anti-government, laissez-faire religion.  Rather, he kept insisting that the government balance its budget – at a time when massive stimulus was needed.  (Sound familiar?)  He also believed, according to Alter, in “people of goodwill voluntarily collaborating to solve a problem” – what another Republican businessman-turned-politician five decades later would refer to as “a thousand points of light.”

Hoover’s points of light did not succeed in overcoming the darkness of the Great Depression.  And he seemed way too much like the CEO in his gold-plated office, out of touch with the suffering common man.  When his aides tried to set up a photo-op to show that he was just a regular guy, the result was a photo of Hoover fishing in the Shenandoah river – in suit and tie!  Even years after his presidency, he claimed that the prevalence of apple-sellers on the street during the Depression was a business scheme under which “many persons left their jobs for the more profitable one of selling apples.”  That apparently was what economic disaster looked like through the lace curtains of the corporate ivory tower in which Hoover was at his most comfortable.

British Prime Minister Neville Chamberlain (who served from 1937-1940) is perhaps an even more interesting example because so much of the folk knowledge about him is wrong.  The image of Chamberlain as a sniveling little liberal appeaser misses the facts that he was the head of the Conservative party, the Tories, and that he based his approach to politics very much on his experience as managing director for 17 years of Hoskins & Company, a manufacturer of ship components.  Like the hapless George W. Bush, he had the advantage of a father who had done well enough in the job of chief executive for the country, former Prime Minister Joseph Chamberlain.  But while passing on the reins of leadership to your kid may be common in corporations and monarchies, it doesn’t seem to work quite as well for democracies.

Sir John Simon, an admirer, wrote that when colleagues came to Neville he would “listen in a business-like fashion to what one had to say, and then state his conclusions with the finality of a General Manager conducting his company’s affairs.”  Chamberlain once told Ivan Maisky, the Soviet ambassador, he felt that “if only we could sit down at a table with the Germans and run through all their complaints and claims with a pencil, this would greatly relieve all tnesions.” […] He was passionately antiwar, in large part because it meant government interference in private enterprise, and the manufacture of armaments would be useless when peace returns.

This puts his unspeakably disastrous policy of appeasing Hitler in a whole different perspective than we are used to hearing from our conservative friends.  Indeed, like Hoover, Chamberlain was obsessive about balancing budgets, and one of the most disastrous aspects of his policy was keeping spending on defense low at a time when Hitler was expanding the German military to eye-popping levels.  As Manchester says: “If Clausewitz saw war as a science, the chancellor viewed it as a business, or at any rate as an enterprise to be managed in the style of a successful businessman.”  This meant sacrificing the safety of Britain, and the rest of Europe to “our economic stability.”

Chamberlain thought he could get away with this because of his confidence that he could make deals with Hitler as if the Fuhrer were just some business rival holding out for the right price.  Nor did he recognize the hazard posed to the world by the Nazis until it was almost too late.  Indeed, as Chamberlain’s foreign secretary (until he resigned), Anthony Eden, noted: “Chamberlain had a certain sympathy for dictators, ‘whose efficiency appealed to him.'”

All of this led to Chamberlain’s appeasement policy, which allowed the Nazis to violate all the treaties that had held Germany in check after WWI, occupy the Rhineland, overrun Czechoslovakia and then Poland before the British and French finally responded with force, leading to the horrors of WWII.  Which is why it would be hard to imagine a more uninentionally disastrous reign in modern times than that of the business-minded Neville Chamberlain.

In more recent times, we have the example of a successful businessman who rose, not to elected office, but to a position as one of America’s most consequential cabinet secretaries.  Robert S. McNamara, Defense Secretary from 1961 to 1968, was architect and manager of the Vietnam War for John F. Kennedy and Lyndon Johnson during which time he escalated that conflict to excruciating levels.

But before that, he was known as a “Whiz Kid” at Ford Motor Company.  McNamara came from an MBA at Harvard and a stint during World War II at the Army Air Force’s Office of Statistical Control, to take Ford by storm.  He and his fellow Whiz Kids brought modern management techniques to the then stodgy and inefficient Ford, according to an article at American Heritage’s Invention and Technology magazine:

“They drew up organizational charts, created job descriptions, split the company into divisions, put together the first coordinated production schedule, and delivered the first cash-flow forecast.”

McNamara had some real success and showed some real vision.  He cancelled the cursed Edsel and anticipated the Japanese by a few decades with a strong focus on smaller, more fuel-efficient cars.  Still, McNamara’s obsession with numbers, ruthless rationality and efficiency revealed major flaws as well, as the American Heritage article points out:

In the 1960s Ford men often repeated the story of how McNamara had “designed” a car while sitting in church one Sunday. He showed up for work the next morning with a piece of paper on which he had laid down the contours of a new model. Only he hadn’t done it with a drawing, as a car guy would have. His doodling had been in numbers. He had written down a desired length, weight, cost, investment level, and price, with no word about how the car should look or feel.

His focus on numbers over people would prove devastating in Vietnam.  As Stanley Karnow wrote in “Vietnam: A History”:

It had been ‘McNamara’s war’ for a long time, a cause he had promoted tirelessly since the star of President Kennedy’s tenure in office.  He had viewed the struggle during the 1960s as almost exclusively in quantitative terms, calculating that the United States could win simply by committing its superior resources effectively.

His belief that winning the war was a matter of body counts rather than winning the hearts and minds of the Vietnamese resulted in the loss of countless lives, dollars and acres.  Indeed, McNamara had his doubts towards the end of his tenure whether this approach ultimately would really work.  But he held his tongue in order to follow orders, only publicly admitting his doubts years later – when it was too late to make a difference for the millions of people impacted by this war.

Unlike poor Neville, McNamara’s energy, brilliance, and management skills were undeniable.  But as with Hoover and Chamberlain, he was blinded by his own arrogance.  As Steven Walt wrote in Foreign Policy after McNamara’s death last year, “McNamara may have been a gifted analyst and corporate executive, blessed with a lot of raw smarts, but he was also one of those people who could not imagine being wrong or resist the desire to tell the world what to do.”

And like the other two, McNamara’s worst mistakes involved focusing more on logistics and efficiency than on the real life consequences of his decisions on people. These men brought destruction on the world not through bad intent but because they refused to listen to others and ignored clear warning signs that they were heading in devastating directions.  These characteristics seemed to serve them well in their business careers, where they could deliver results with less destructive consequences and didn’t have to worry about answering to anyone other than the shareholders.  But that brings me back to my original question, of whether even the greatest business executives must make great political leaders.

I do not write all of this in order to say that a business man or woman cannot make a great leader.  But for those who aim for high office, I do think it’s important that they grapple with the terrible leadership examples outlined above and explain to the voters why they will be different.  And it’s important for the voters to read and appreciate history, which on this issue raises major warning flags.  For sure, we do not want to elect the next Herbert Hoover, Neville Chamberlain, or Robert S. McNamara to run our country – regardless of how well they ran eBay or HP or whatever. 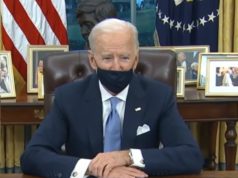 Rep. Rob Wittman (R-VA01), Who Pushed to Overturn Election, Called Out HARD By Qasim Rashid For Claiming “Today, we witnessed the peaceful transfer of...