Congressman Nye joins the shameless “Support the Troops” chorus of Cantor and all who proffer use of the HOV lanes as honor for service rather than offering substantive support by calling for an end to the waste of American blood and treasure in foreign misadventures. Cower behind the troops, again.

Beyond the fact that this is part and parcel of establishing a separate military class and walking away from the concept of the citizen-soldier, it is idiotic; it is unenforceable; it rewards personnel whose only sacrifice has been a paper cut when opening their paychecks. It gives short shrift to civilian members of DoD. But nice stab at reaching out to the same people Palin abuses. It is a modern day Napoleonic ribbon.

“Traffic congestion is a serious problem in Hampton Roads, and our HOV lanes are often under-utilized,” Nye said. “This legislation will help ease traffic for everyone in the region, and make sure our military and emergency response personnel get where they need to go.” – Glenn Nye

Contrast that with Cantor’s statement on the same “issue”:

““Virginia is home to nearly 120,000 members of the Armed Forces and countless law enforcement officials who make their way to work each day in service to our nation and to keep us safe. This small measure allows the Commonwealth to alleviate traffic while also making the commute for these brave individuals much more expedient. Motorists need relief from traffic congestion, and this common-sense step will help to ease that burden. It is a win for motorists, a win for families, and a win for the men and women of our armed forces and law enforcement officials who keep us safe.” – Eric Cantor

A similar initiative was pushed by Delegate Chris Stolle (R-Virginia Beach) in the Virginia Assembly this year. Not a single member of the Assembly had the fortitude to call it what it is: a meaningless gesture that will make the HOV lanes equally congested and destroy any incentive to carpool for un-uniformed personnel. But shucks, HOV lanes are a needless restriction on our freedom anyhow. And, HOV lanes are not enumerated in the Constitution.

The good news for anyone who owns a uniform: you get a free pass to use the HOV lanes. There is no way to enforce this exception without a roadblock halting traffic in the lanes. That should make sales at the army surplus stores soar. So in a way, I suppose it is an economic stimulus. I may even open a shop just short of the lanes and sell uniforms; choose your service and rank.

Congratulations to Eric Cantor and the Republicans for the coming successful subversion of the HOV concept. Shame on anyone who thinks this is anything else because it accomplishes nothing else. 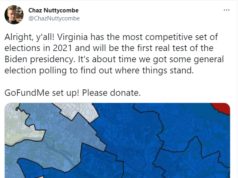 Believe It or Not, There *Still* Hasn’t Been a Single 2021 Virginia General Election Poll. Help Fund the First!