Governor McDonnell. Simple as that. He is a failure in every economic aspect; riding behind Obama’s improving economy. This deal was lobbed soft across the plate; delivered on a silver platter. And he turned his back. Not Governor Barbour. He didn’t let political differences cloud his better business judgment.

Terry McAuliffe had every reason to bring the MyCar by GreenTech factory to Virginia. Governor Bob had one reason to run it off. Republicans are scared to death of success…when it has a hint of a Democratic tint. Of course with T-Mac, it’s never just a hint. Okay, Governor ABC, let’s get back to basics. McAuliffe is actively pitching another deal or two. Want to swing at this cupcake or take your bat and slink away again.

On July 4th or thereabouts, I will join a throng in Tunica, Mississippi to watch the reverse of Republican economic initiatives. Jobs are being imported to America from China. They could have been Virginia jobs, but Bob’s not for some jobs; not when they have a Democratic taint. McAuliffe has four more models on the drawing board. This little red job is one. Will it be produced in Virginia? 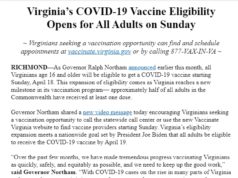 Well said by @vaplan2018. In fact, Cox and his fellow Republicans have worked relentlessly to make things WORSE when it comes to gun violence. https://bluevirginia.us/2021/04/friday-news-the-pandemic-remade-every-corner-of-society-now-its-the-climates-turn-jim-jordan-trips-over-his-own-asshole-trying-to-debate-anthony-fauci-8-people-killed-in-shooting-at#comment-5347961170