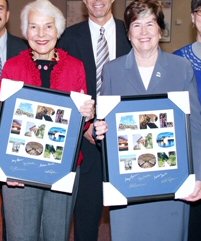 With the Arlington County Board Democratic caucus just 8 days away, things are definitely heating up with the two candidates widely assumed to be the frontrunners. First off, Libby Garvey has now been endorsed by recently retired State Senators Mary Margaret Whipple (D-31) and Patsy Ticer (D-30). These endorsements follow the endorsement of Garvey by incoming Senator Barbara Favola (D-31), whose departure from the Arlington County Board for the General Assembly in Richmond triggered this special election. The full endorsement statement by Whipple and Ticer of Garvey is on the “flip.”

As far as I can tell, these endorsements help cement Garvey’s position as an (increasingly) strong front runner for County Board. Why? Two reasons. First, I strongly doubt that Favola, Whipple, and Ticer would have all decided to endorse Garvey unless they were confident she’s going to win. Second, Favola, Whipple, and Ticer are all very popular among the likely electorate — hardcore, longtime Arlington Democrats who are overwhelmingly favorably inclined towards the endorsers.

Finally, Garvey already had major advantages in this race, as the only elected official running, as the candidate with by far the highest name ID, and as the candidate with the best organization and most resources (e.g., Garvey seems to have a full mail program, unlike the other candidates). Then, last Wednesday, Garvey had a strong performance in front of a couple hundred people at the Arlington County Democratic Committee debate. Now, with just 8 days to go, it’s hard to see how anyone tops this combination, especially since – as we’ve seen in Iowa and New Hampshire recently – a multiple candidate field can be highly advantageous to the “establishment” candidate, as the others tend to split the “not-establishment-candidate” vote. That very well could happen in this case, with Garvey winning 40% or more of the vote next Thursday and Saturday. Stay tuned…

P.S. I’m well aware, as are many Arlington Democratic and progressive activists, that there are rumors flying around about another major candidate in this race. However, until I’m able to get a coherent story, confirmation of exactly what’s going on, and preferably the source(s) of the allegations being thrown around (a potentially fascinating story in and of itself, possibly more interesting than the rumors themselves!), I’m not planning to write any further on this stuff. We’ll see what other blogs and news outlets decide to do, as the information is being sent around to everyone and their uncle/aunt/cousin/neighbor/dog/cat/etc., apparently.

Arlington, VA – Senator Mary Margaret Whipple and Senator Patsy Ticer today endorsed Libby Garvey for the County Board seat being vacated as a result of Favola’s election to the Virginia Senate.

“I am so pleased to endorse Libby Garvey for Arlington County Board.  It’s a tough job, but Libby’s experience, ability and dedication to our community make her the obvious choice.”

“I’ve worked with Libby for years.  She has a deep understanding of the issues facing Northern Virginia.  I know she is committed to the progressive values that are important to us.  She’ll be an excellent County Board member for Arlington.”

Senator Whipple served on the Arlington County School Board before elected being elected to the County Board in 1983.  She then moved on to the Sate Senate in 1996.  Senator Ticer served as Mayor of Alexandria before being elected Senator in 1996.

“I’m honored to have the support of these two strong leaders who have done so much for our community.”