But as Rachel Maddow discussed today, amazingly Mitt Romney supposedly has more supposed “cred” on the matter of deficit reduction.  The new Washington Post poll shows that is the only element upon which Mitt Romney does better than the President.

Second, the data show the debt left by recent presidents. Bill Clinton and Barack Obama have the best track record on the  subject of the debt.

Third, compared to other presidents, President Obama is NOT a big spender. 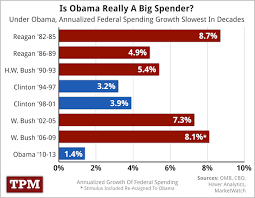 You have to wonder who believes the master at predatory practices and expanding the debt of beleaguered companies would reduce the deficit.  You have to wonder how the GOP candidate has the nerve to talk budget plans which do not add up.  The more you know about Mitt Romney the more you realize he is all hot air. And yet, apparently, too many Americans are deceived by the Romney fiction on the subject of the deficit and national debt.