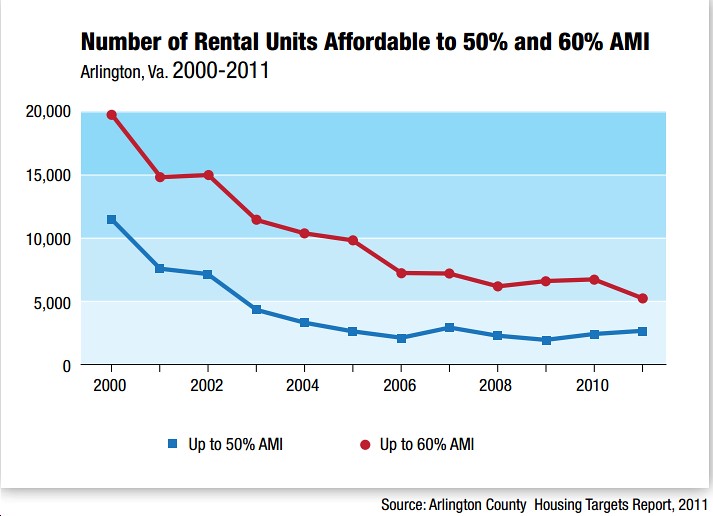 I’ve been thinking about this issue for a long time, talking to people who know a lot more than I do about the subject, etc. That includes reading this article at Bacon’s Rebellion (“The Emerging Exurban Dead Zone”), which discusses research conductec by EM Risse on the “profound shift – what he calls the U Turn – away from the scattered, low-density pattern of growth widely referred to as ‘suburban sprawl’ (a label he avoids as a ‘core confusing word’) toward infill and re-development of the nation’s urban cores.” That got me to thinking about why places like Arlington — and in fairness, it’s not just Arlington, but also DC, Bethesda, and other “inner DC suburbs” to more or less an extent — have become so expensive that now, a new affordable housing study finds that (as the Post summarizes) “two of every five residents say they are likely to move out of the county in the next five years because of housing costs.” I’m also seeing this story on local TV news.

So, what on earth is going on here? As I said, I’ve been thinking about this for a long time, for a reason: this problem has been around for a long time, and has only been getting worse. My main thesis as to why it’s getting worse is simple, taking us all the way back to college and Econ 101 (remember supply and demand curves?).

In short, places like Arlington have enacted the types of policies (and/or failed to enact the types of policies) that, both explicitly and implicitly, have constrained the supply curve for housing (e.g., kept that supply curve from shifting out sufficiently) while the demand curve (the overall number of people who “demand” housing in Arlington) has shifted out sharply, along with the region’s population.

The result of the demand curve shifting out and the supply curve staying relatively fixed, per lesson #1 in Econ 101: the price of housing  – both owned and rented – has skyrocketed, with Arlington home values nearly doubling between 2002 and 2012 (from $269k to $519k) and rents at the level where a full-time salary of nearly $34/hour is needed to afford the AVERAGE rent ($1,615/month in 2011; undoubtedly higher today) of a one-bedroom apartment in Arlington. Also note that average rents in Arlington County have increased 47% over 10 years, while “while average salaries have increased only 37%.” That means “more Arlington residents are priced out of the rental market” every year that goes by.

How bad is this situation? According to this report by the Alliance for Housing Solutions:

*”In Arlington, nearly 2 in 5 rental households pay 30% or more of their monthly income for rent.”  Note that 30% of income is the cutoff for what is considered affordable rent.

*”In 2000, almost 20,000 rental units in Arlington were affordable at market rates to households at or below 60% of AMI [area median income]. Today, just over 5,000 units are market-rate affordable to those households.” That’s obviously not heading in the right direction, to put it mildly.

Why does any this matter? A few key reasons from that same report:

*”Housing is the foundation of an affordable community, giving households the chance to improve their economic situations”

*”Workers at a range of income levels can live near work, reducing personal and environmental stress, and keeping employers productive and the local economy strong. This includes prized Gen Y workers who desire more urban environments.”

I’d add that many people can’t stay long-term in Arlington if they want to buy a home, raise a family (let alone get by on one income) here, or peak out in a career (e.g., no more big raises). Also, consider that graduates of the Arlington Public School system won’t be able to afford to raise their own families here unless they go to law school and work in a big firm for big bucks. Also note that this pressures people away from careers in public service, or working for “good causes” like, let’s say, an environmental NGO or other groups working for positive change in the world (e.g., as opposed to the wealthy/powerful polluters and other corporate bad actors who keep many big law firms, consulting firms, etc. going in this area).  Sure, by living in Arlington you can live near transit and save money by not having to own a car (or multiple cars), but you are also burdened by high levels of school and consumer debt, which reduces the amount of income you could apply to renting an apartment or buying a home.

Again, the reason “the rent is too damn high” in Arlington is that, at the root of it, housing availability simply hasn’t increased fast enough to keep up with demand, population pressures, etc. Thus, Arlington had 90,426 housing units in 2000, growing just 19.4% (17,574 new units) through 2012 (reaching 108,000 total units, of which 63.5% are multi-family units — apartments or condos). That’s clearly not sufficient to: a) accommodate the number of people who currently live in Arlington AND the number moving into or within the DC metro region who would prefer to live in Arlington; or b) keep rents and housing prices in general from skyrocketing, which leads to results like the Washington Post article referenced in this post’s headline (“2 out of every 5 Arlingtonians say they’re likely to move out county in 5 years”).

Another downside to this situation: decreased housing affordability contributes to Arlington becoming a less diverse county in terms of income (and also in terms of ethnicity and race, which are for a variety of reasons – most of them bad – positively correlated with income and wealth in this country). And, of course, given that the region’s population is growing inexorably, it means that many of the people who would prefer to live in Arlington will be forced to sprawl out to places like Loudoun, Prince William, etc. That’s bad for a wide variety of reasons, including environmental damage (sprawl means loss of forested areas and farmland, plus increased need for roads and pollution-spewing cars).

So, what’s the answer to this problem? Purely in terms of doing a thought experiment/”Econ 101″ theory, of course, Arlington (and, for that matter cities like DC and other “inner suburbs” in the region) could crank up their housing supplies. What this would mean, in practice, would be a major increase in population density, by (for instance) changes in zoning to allow much taller buildings along Metro corridors; by running transit down other corridors, like Lee Highway, and building that area up as well. etc. There are many benefits to density, which the following table summarizes: 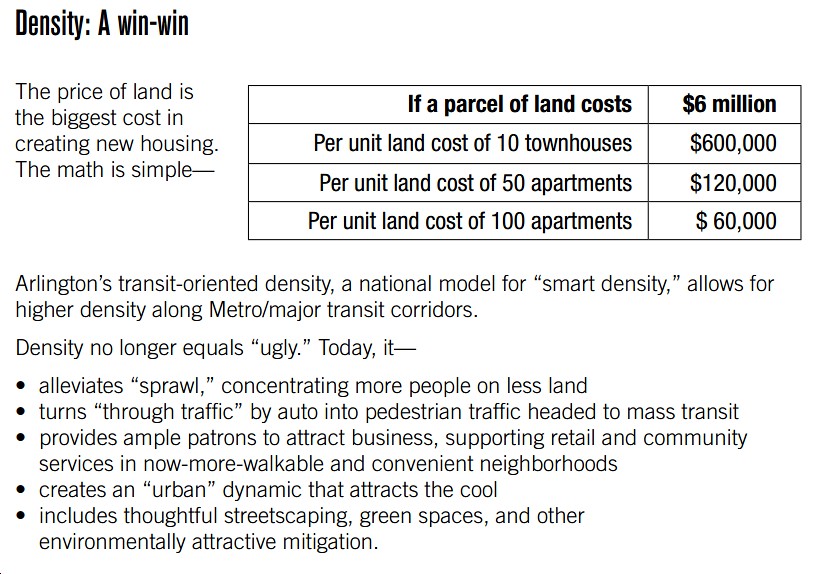 I did some quick calculations for this fun thought experiment, and what I found was striking: doubling Arlington County’s density level would mean that Arlington County could house 454,000 people, up from 227,000 today). Just for fun, I also calculated a few other jurisdictions in the DC Metro area, applying the double-Arlington-density levels to their land areas.

In other words, increasing density in the “inner suburbs” and DC to double-Arlington-density levels could easily house the entire population of the DC metro area (currently around 5.8 million people). Remember, this is just a thought exercise, as I’m well aware it’s not going to happen for a wide variety of reasons (political and otherwise, such as that retrofitting from a car-centric pattern won’t be easy, with massive investment in transit and other infrastructure necessary to accommodate the increased population, let alone in a desirable way). However, it does demonstrate the difference between a low-density, sprawl pattern of development (what we have now) and a much higher-density pattern of development.

As for Arlington specifically, you can do the thought experiment any way you’d like: double, triple, quadruple housing stock (e.g., shift the supply curve for housing out to varying degrees) and see what that does to the cost (and mix) of housing in Arlington. But again, it’s extremely unlikely to happen, as a LOT of people in Arlington would be against it. In fact, when I’ve tried to raise this issue with the “powers that be” over the years, I’ve mostly gotten uncomfortable non-answers or just…silence.

I asked one of the best-informed observers of Arlington I know what they thought about all this, and got a few interesting comments.

*”There has never been a strategy in Arlington for keeping market rents affordable.”

*”High property values are the cash cow that pays for everything in Arlington County. So, while folks may bemoan the loss of diversity, they continue the same policies that keep milking the cash cow.”

*”If you get ‘radical’ and increase density, perhaps you help new people, but those already living here perceive a degradation in their quality of life…so the voters that are here already don’t have a big incentive to increase density, beyond guilt.”

*”Even the County Board members who live near Metro are out to protect themselves with zoning limits.”

*”There is a definite undercurrent of hostility against [affordable housing] for lower income people, while nothing appears to be done for the ‘in the middle’ group…People that make too much for a [Committed Affordable Housing unit] are resentful.”

*”Arlington is mostly focused on responding to the demands of high-income residents.”

*”Today, people are openly competing with each other. Many believe that more affordable housing will mean loss of open space, recreation, crowded schools, crime, higher taxes, fewer trees, etc. That has been the biggest change in public opinion in the past 2-3 years. Folks are now less reluctant to ‘look out for their own thing,’ in a way that suggests density and aff housing is bad for every other goal.”

That’s just a taste of what the Arlington County Board would face if it tried to dramatically change the mix of “urban” and “village” in Arlington (or what a candidate for the Board would face if they advocated for the types of policies described above). In short, all hell would break loose (the candidate would almost certainly lose, and badly). Which is why, for better or (in my view) worse, it’s quite likely that housing affordability in Arlington will continue to decline, and that “2 of every 5 Arlingtonians” will “move out of county in 5 years.” Sigh.