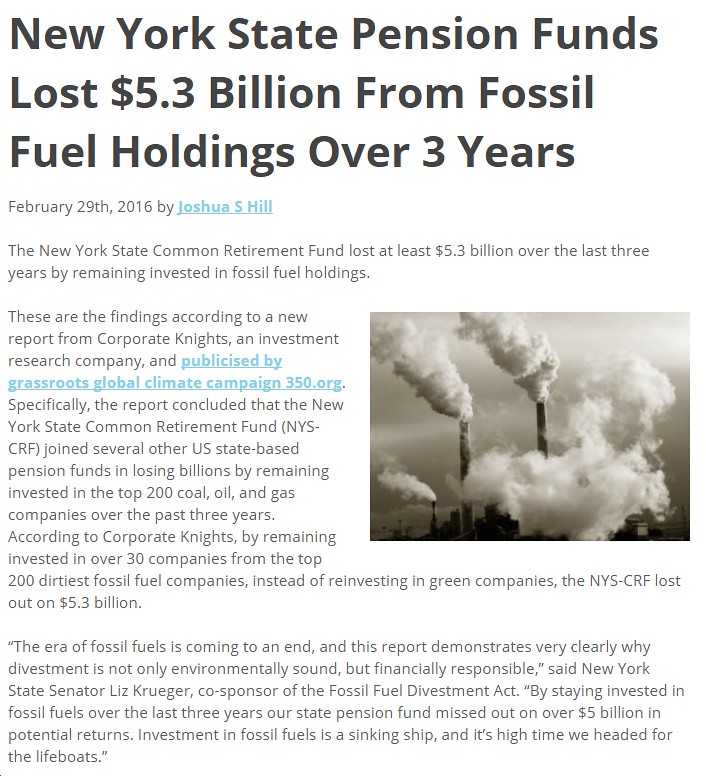 Back in April 2015, Gov. McAuliffe was asked about fossil fuel divestment, giving one of the most absurd, ignorant, flat-out-wrong answers to a question I think I’ve ever heard him give. Clearly, McAuliffe was wildly wrong then. Almost a year later, with even more voluminous evidence that trillions of dollars worth of fossil fuels are “stranded” and with the industry going down the tubes, McAuliffe’s even MORE wildly wrong now.

Need an example of a state which didn’t divest from fossil fuels? Glad you asked; I’ve got one! 🙂 Take McAuliffe’s home state of New York, for instance, where the “State Common Retirement Fund lost at least $5.3 billion over the last three years by remaining invested in fossil fuel holdings.” Brilliant, eh? More like the opposite of brilliant, as in brain-dead stupid, not to have ditched fossil fuels while they (and we) had a chance (as I wrote last September)? Although having said that, it’s still not too late to get out of this dirty, dangerous, destructive, dying industry and to switch into 100% clean energy, which represents a multi-trillion-dollar opportunity for the 21st century. The only question is whether Virginia will miss out on this once-in-a-lifetime opportunity. So, Gov. McAuliffe, now that you’ve joined Hillary Clinton and come out against offshore oil drilling, how about speaking up about the need for Virginia to ditch its fossil fuel investments?

"34% of Virginians think [Youngkin] should run [for president], while 52% do not, mirroring similar sentiment from August."

VA Reproductive Equity Alliance: Far-Right Del. Marie March’s “Personhood” Bill “puts the lives of pregnant people at risk and strips them of control over their bodies” ("This bill also bans access to critical forms of contraception, such as IUDs") https://bluevirginia.us/2022/12/va-reproductive-equity-alliance-far-right-del-marie-marchs-personhood-bill-puts-the-lives-of-pregnant-people-at-risk-and-strips-them-of-control-over-their-bodies