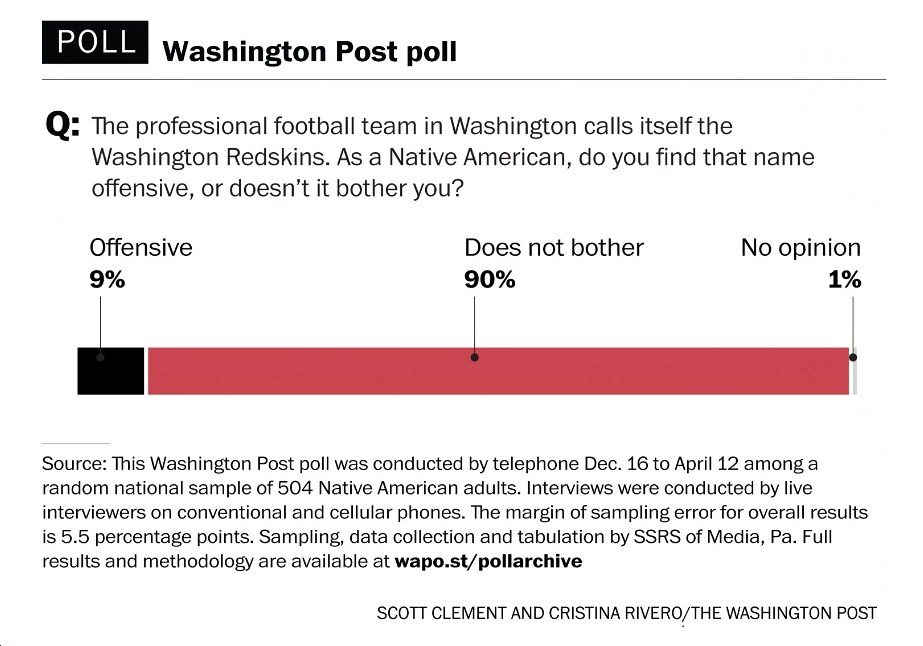 Unlike ideologues (e.g., climate science “deniers”) immune to empirical evidence, I’ve always considered myself first and foremost someone who looks at (and respects) data, science, solid new information coming in, etc., and makes up my mind accordingly.

In the case of the Washington NFL franchise team’s name, I’ve believed for a long time that the word “Redskins” had a sordid history at the minimum, was racist at worst. But now comes new empirical evidence that the very people who you’d think would be most offended…well, aren’t.

Nine in 10 Native Americans say they are not offended by the Washington Redskins name, according to a new Washington Post poll that shows how few ordinary Indians have been persuaded by a national movement to change the football team’s moniker.

The survey of 504 people across every state and the District reveals that the minds of Native Americans have remained unchanged since a 2004 poll by the Annenberg Public Policy Center found the exact same result. Responses to The Post’s questions about the issue were broadly consistent regardless of age, income, education, political party or proximity to reservations.

And no, I’m not going to play the game many Republicans did in 2012, cherry picking polls that were favorable to Mitt Romney, “unskewing” polls they believed were biased towards Barack Obama, blah blah blah. It was crazy then, and it’s crazy now — no matter who does it and on whatever subject. I’m also not going to be offended about something that the very people who you’d think might be offended aren’t concerned with.

So, with that, I’m moving on to other, far more important issues facing our state, our country and our planet. Of course, I still haven’t changed my intensely negative opinion of Dan Snyder, for a whole host of reasons. And I’m never going to be a big fan of the name “Redskins,” given that the history of this word has been “pejorative” and “often contemptuous,” even if at times historically it was used non-pejoratively or even positively. But again, if Native Americans overwhelmingly aren’t offended and/or don’t care about this word, then who the heck am I to make a big deal out of it?

Instead, how about we focus on REAL issues among Native Americans, such as: “Native Americans have the lowest employment rate of any racial or ethnic group in the United States;” “Native students are the only student population that did not improve their reading and math testing scores in grades 4 and 8 from 2005-2011;” “As of 2011, there were over 120,000 tribal homes lacking access to basic water sanitation services;” “When it is available on reservations, internet is more expensive than it is in the U.S. as a whole;” Native Americans’ health statistics find “[l]ower life expectancy and the disproportionate disease burden;” Native American kids’ lives “are being ‘destroyed by relentless violence and trauma.'” To name just a few, serious problems that need to be dealt with on an urgent basis.

Bottom line: In the end, it’s no wonder that Native Americans aren’t focused on the name of Washington, DC’s professional football team; among other things, they have a LOT more pressing problems to deal with, including getting screwed over by the U.S. government for the past couple hundred years (President Andrew Jackson and the “Trail of Tears,” anyone???).

P.S. From a Virginia perspective, my guess is that this poll makes it more likely for the team to ultimately move back to D.C., and NOT to Virginia. And that’s a very good thing, as there is NO WAY IN HELL that a football stadium should ever be built in exurbia, not near public transit, not in a central/high-density location, etc.