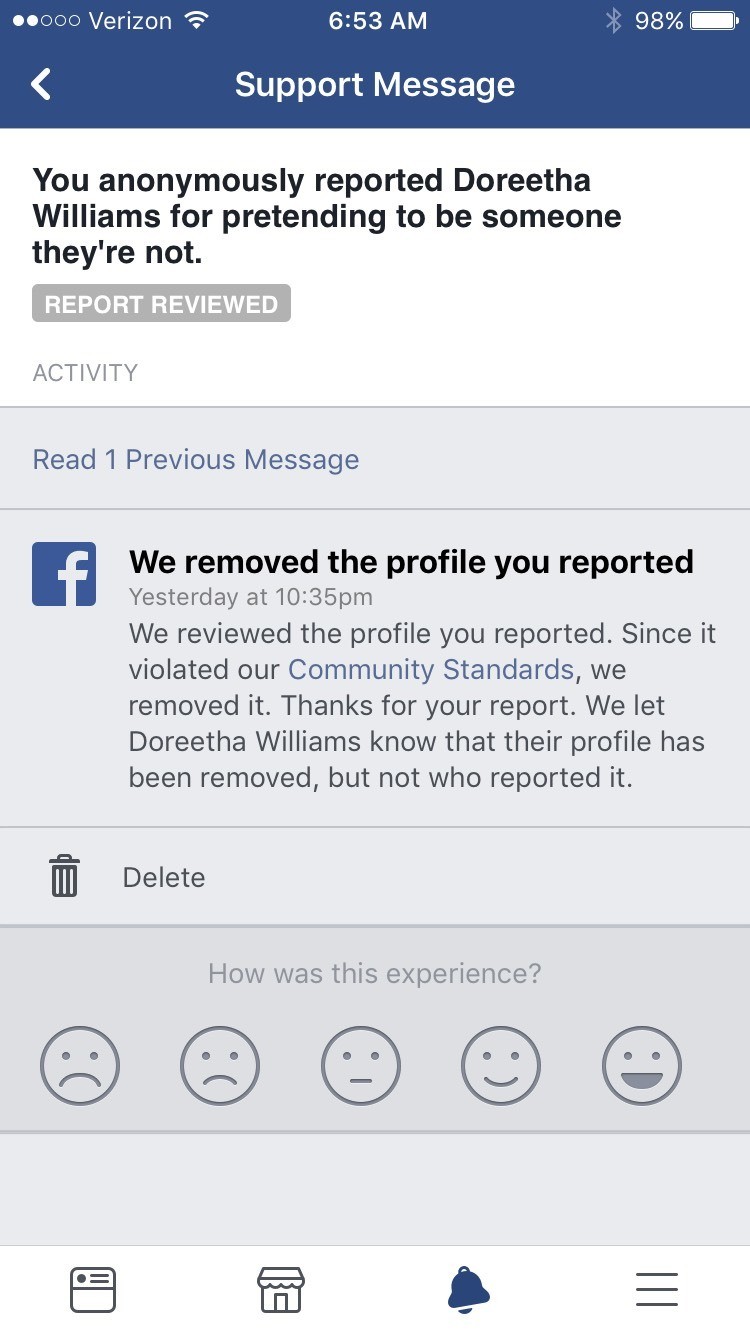 It is time for people in Henrico County, Virginia, and the United States to take a stand against political tactics that prey on people’s insecurities and racial and ethnic stereotypes. It’s time for people to stand up for integrity not only in our elections, but also in our candidates. We’ve seen the unfortunate results of Putin-esque style manipulation tactics used by the VA Republican Party to attempt to smear a highly qualified candidate for Board of Supervisor named Courtney Lynch, who is a former Marine and attorney and current leadership development expert and best-selling author. The Richmond Times Dispatch covered the story HERE and NBC 12 covered it HERE.

On October 14, 2017 Doreetha Williams was born on Facebook using a stock photo and a dozen stereotypical “Likes” that made her look like a Russian bot. Her caption said “Turning 80 years young in 2017!” but it was nothing to celebrate. I discovered that the Facebook page was a fake—a trumped up page depicting an elderly African American woman in Richmond, VA—whose online communication was manipulated by the Virginia Republican Party to support Bob Wittewho is running against Lynch for Henrico Board of Supervisor. VA GOP denies creating the fake account and Witte declines prior knowledge of deceptive tactics by the GOP.

Less than two weeks after the creation of this phony FB account, the VA Republican Party sent out a deceptive campaign against Lynch using an excerpt of Doreetha’s Facebook conversation with Lynch. The mailer blanked out Doreetha’s name, but Lynch had a screen shot of the exchange in which “Doreetha” inquired about extension of public transit from Richmond to the affluent western Henrico suburb of Short Pump. The VA GOP claimed that Lynch “openly admitted on her FB age that she is in favor of expanding a Bus Line [sic] from Staples Mill to Short Pump.” “Under the plan developers, special interests and the City of Richmond win, but Henrico taxpayers lose.” Lynch does support expanding mass transit—IF it is economically feasible to do so. So, what is the problem?

The problem is that this is the second time the VA Republican Party has used an US versus THEM mentality to position Henrico County as somehow superior to Richmond. In the first doctored mailer, they falsely depicted Lynch as buddying up to Richmond Mayor Levar Stoney—cutting and pasting their heads on stock photos with campy “thumbs up” signs. The Richmond Times Dispatch broke the story. We should be proud of partnering with our neighbors to promote economic development. The second mailer positions a bus line as something that will benefit Richmond and not Henrico citizens, which is false for several reasons (see image below).

First, Staples Mill is a road in Henrico County that is currently only partially served by public bus services, so the mailer incorrectly asserts that Henrico will lose. Many of people who live along Staples Mill east of Parham Road are disproportionately lower income than more western parts of the County, so public transportation could equate to more economic vitality and stability for families in this area.

Lastly, if economic incentives aren’t enough, according to the Centers for Disease Control (2017), “public transportation systems are associated with reductions in several health risk factors such as motor vehicle crashes, air pollution, and physical inactivity. … Public transportation (school, intercity, transit bus, light rail transit, and subway) accounted for less than one percent of transportation fatalities in 2011, while private passenger vehicles accounted for more than 75 percent of transportation fatalities. … A cost-benefit analysis that examined the impact of expanding public transportation capacity by converting a lane for bus rapid transit found an association with positive net benefits to society, including travel time savings, travel cost savings, and emissions reduction.”

So, if the VA GOP is wrong about the economic impact of public transit, then what’s their motive? Arguably, they are playing on the anti-immigrant, covertly racist ideology that elected Congressman Dave Brat in 2014 and following the Russian playbook by using fake social media to promote lies with the intent to sway election outcomes.

As a resident of Henrico County who values diversity and support public transit, it was gut wrenching to receive these dog-whistling political mailers and see that Putin-esque style political manipulation (additional article here) has infiltrated local politics. Bob Witte is a nice guy who has denounced the use of race-baiting politics, but he has not spoken out against the use of mailers to attack his opponent and benefit him. He has experience in the County, but it is Courtney Lynch’s patriotic service, positive campaign, and dynamic vision for what is possible for Henrico that impresses me. I am looking for visionary leadership that will improve quality of life and support sustainable development, green space, innovative work-home-play spaces, and a thriving, diverse community. I reject racial politics and reject the notion that embracing Virginia’s past is the best path forward.

I encourage local and state leaders and candidates to do the same. You can help by voting on November 7th for candidates who demonstrate integrity and who support progress.