No one has better access to young adults, to persuade them to register to vote, than young adults themselves.  And high school students who are too young to vote are surrounded by high school seniors, some of whom reach voting age every day.

So I sketched out an app based on a simple concept: Friends make sure friends can vote on election day.  If such an app could get one-tenth the interest of Pokemon Go circa summer 2016, that could swing an election.

Anyone can use the sketch shown below to begin playing a voter registration game, racking up points for registering voters, and always aiming for a new “personal best” point score.  (The sketch is a flowchart that coders could use in developing an app.)

Far better would be development of the sketch into an actual app, permitting competition among players, and in-app recognition for achievement.  Beginning players could quickly register enough voters to gain the status, conferred by the app, of “Local elected official,” and keep out-competing other players to become “Mayor,”  “Governor,” and then “President.”  If a player competing against others in their zip code quickly bested the local competition to become “President”–and grew bored, watching TV and sending tweets all day–they could compete on a progressively larger playing field—against other players in their city or county, their state, or the entire U.S.

Everyone who plays such a game can help make good things happen come election day. 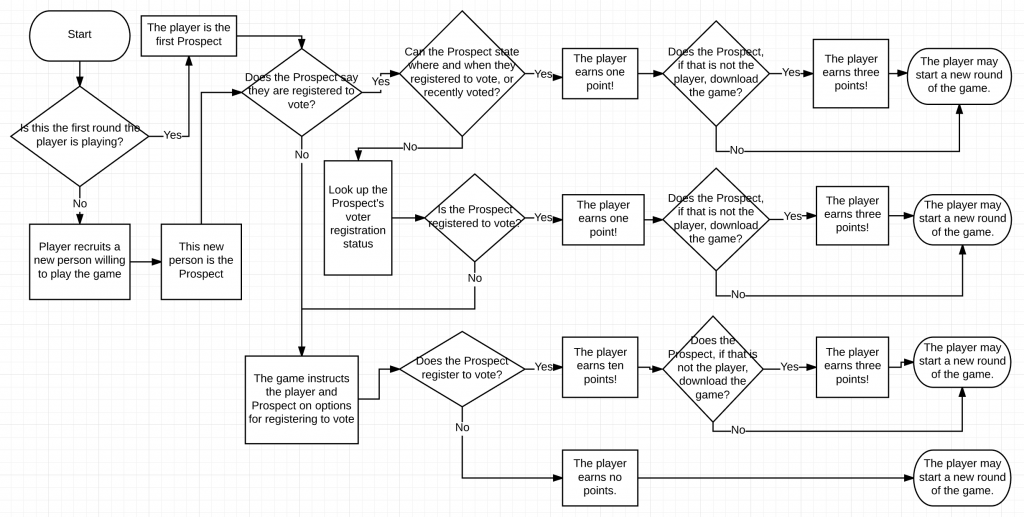