I’ve been to two protests in the past week. In both cases, those leading the protests were strong and brave, and the causes they were fighting for were a matter of life and death. Both were facing a powerful opponent with massive financial resources at their disposal. Both moved me to tears. And that’s about where the similarities end.

On Saturday, in the heart of Washington DC, a place of immense political power, an urban capital with a reputation for being dirty and seedy and full of rats–figuratively, at least–around 800,000 people gathered to rally for gun violence prevention. Famous celebrities like Oprah and George Clooney donated $500,000 each to the costs of organizing the rally. The streets were filled in every direction with wall-to-wall people. Jumbotrons stood in every intersection, broadcasting the stage, since most folks couldn’t get anywhere near it.

Everyone had a sign. Signs proclaiming the power of people to fight for better gun laws that would protect our children and all of us from guns. Signs promising to vote out those who refused to legislate gun safety. Signs cursing the NRA. Famous singers performed beautiful songs with lyrics that spoke of empowerment. And the children of Parkland, South Los Angeles, Chicago, and elsewhere spoke about living in a world where gun violence is an everyday fear. 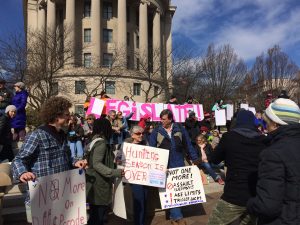 Nearly every local Democratic politician attended (the nonlocal ones attending similar rallies in their own areas). Many of them gave speeches about the need for gun violence prevention legislation, bragged about their “F” ratings from the NRA, and many pointed out the amount of money local Republican politicians accept from the NRA. The implication was clear: the ability of the NRA to donate massive sums of money to politicians stands in the way of writing gun violence prevention legislation that would save lives and protect our children from mass shootings.

On Wednesday, I woke up early and drove (with Kenny Boddye) to Peters Mountain, on the border between West Virginia and Virginia, to see the MVP tree-sitters and blockade. We first hiked up Groundhog Trail on the West Virginia side. This place is pristine, silent, stunning and awe-inspiring in its natural beauty. The trail zigzags up the side of the mountain, through trees and rocks and small trickling streams. We were completely alone, except for the occasional bird overhead or rustle in a bush indicating some small animal within. 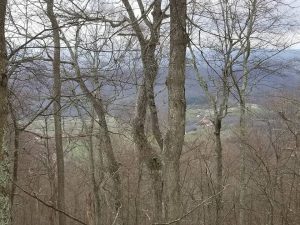 This is where Dominion and Appalachian Power companies want to chop down trees and drill through to stick a 42-inch pipeline that would transfer fracked gas from West Virginia through Virginia and to Pennsylvania. For export. When this pipeline leaks–and make no mistake about it, this pipeline WILL leak, because they all do eventually–those trickling streams we saw will all be poisoned.

After our hike on the West Virginia side of the mountain, we drove around to the Virginia side, where the protesters were gathered. The fight against this pipeline has taken many forms for the last two years–from attending and testifying at public hearings on the pipelines, to holding rallies at the compressor station at Union Hill, to legal challenges. But with the pipeline builders beginning to move ahead with tree-felling, despite not having all the permits approved for the project and not allowing promised further public input, MVP opponents are desperate to find some way to stop the destruction. So they’ve taken to the trees, staging a sit-in up in a tree, and attempting to block the access road. And because there are certain calendar constraints on tree-felling, due to protected animal nesting, they may have the ability to put a temporary halt to the project, long enough for legal proceedings and permitting issue to be resolved. 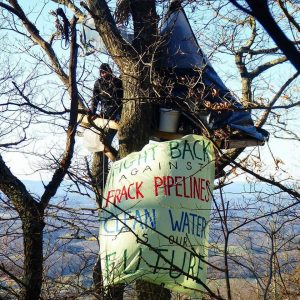 So we drove to the site of the blockade. Unfortunately, when we arrived, the protesters had been dispersed, and only two state trooper cars were now blocking the road. The trooper very kindly told me how much he supported their cause, and opposed the pipelines too, but that he couldn’t let us pass to the tree-sitters.

On our way out, we were fortunate to find the blockade protesters, gathering to figure out their next steps. We stopped to chat and to give them some supplies we’d brought to donate. They were shocked and grateful that we’d come from Northern Virginia to be with them. Because here’s the problem: most Virginians whose lives are not being directly touched by the building of these pipelines are turning a blind eye to this situation. These pipelines are ecologically, and environmentally, unsound; they not only run through some of the most beautiful natural assets Virginia possesses, they also run through the homes and properties of people who’ve lived on this land for generations, including and especially rural, black former freedmen.

There were no celebrities donating huge sums of money, no famous singers, and above all, no local politicians at this protest, giving speeches about the need to stop the pipelines and the amount of money the power companies are allowed to donate to our politicians. In fact, Governor Northam promised to have focus groups with local concerned residents, but has so far yet to ever do so. The only politicians to address the pipelines in any meaningful way are those whose districts are in the path. 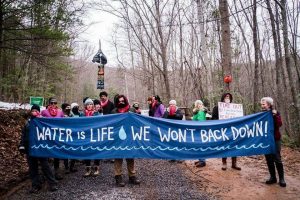 Please follow the news, share the news, talk to your representatives, write to the Governor, help this community any way you can. You can also donate to the tree-sitters, here.