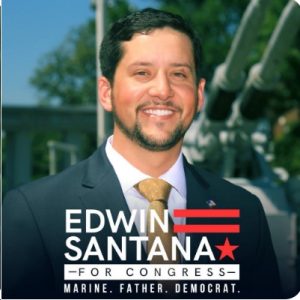 I’ve been trying to keep my eye on all the Virginia Congressional District Democratic nomination contests, and there’s a ton going on – lots of excellent Democratic candidates, a great deal of energy and enthusiasm to replace Republicans, etc. All of that’s encouraging to see in these otherwise dark times for our country.

I’m particularly impressed to see this Democratic enthusiasm and energy spreading even into relatively “red” districts. For instance, VA-01 is a tough district by almost any metric, with Ralph Northam losing to Ed Gillespie there by around 10 points (54.2%-44.6%). Which means that for Democrats to knock of incumbent Rep. Rob Wittman (R) and his nearly $1 million war chest this November, we’re going to need at least two things: 1) a very strong Democratic “wave” election; and 2) an appealing Democratic candidate running a strong/effective campaign. Even so, it will be tough; the Crosstab blog gives Democrats a 23% chance in VA-01.

Still, 23% is a lot higher than zero, which means that Democrats definitely have a shot here, especially if Trump stays unpopular and if Democrats stay motivated into the fall. The other part is having a strong Democratic nominee to face Rep. Wittman, and after watching the candidates in forums/debates, looking at their financial reports, websites, social media fees, etc. – and following the withdrawal from the race of Prince William County School Board Chair Ryan Sawyers, who had been endorsed by Tom Perriello – I’ve decided on my pick for the VA-01 Democratic nomination: Edwin Santana.

Let me emphasize that my support for Edwin Santana is not about the other Democratic candidates (John Suddarth and Vangie Williams) being bad, but about my really liking Santana (the candidate, not the musician, although I like him too – lol). With that, here are the top 10 things I like about Edwin Santana and his campaign.

In sum: we have three good people running for the Democratic nomination in VA-01, but for my part, I’m going to be enthusiastically supporting Edwin Santana.

P.S. I could easily have thrown in #11, which would be that I’m highly impressed with Santana’s campaign manager, Ayodele Okeowo, more than the vast majority of campaign managers I come across (and no, that’s not a backhanded compliment in any way). His latest Facebook post illustrates what I’m talking about: “Happy Black History Month and Happy Birthday to Marian Anderson, one of the best American contraltos (women with lower singing voices) of all time. She was the first Black singer to perform at the White House and the first African American to sing with New York’s Metropolitan Opera.”