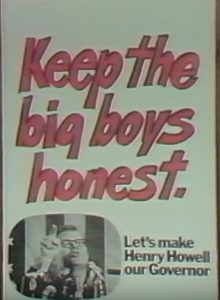 The ever iconoclastic Henry Howell – my father – was a civil rights leader who fought “massive resistance” to open public schools and was instrumental in electing the first African-American to the General Assembly since Reconstruction. Henry Howell was a fighter for democracy who went to the United States Supreme Court to eliminate the poll tax and to establish the principle of one-man, one Vote. He was an Atticus Finch who fought for economic justice and public education, successfully suing utilities like VEPCO (aka, Dominion Energy), insurance companies for racially discriminatory pricing, and three Governors of Virginia, securing fair legislative districts and public education funding. And, surely, Henry Howell was a once-in-a-lifetime politician who fought the power establishment of Virginia by uniting George Wallace voters and African-American voters in a crusade for working people.

Today, newspaper editors and political writers seem to enjoy invoking the name of Henry Howell to compliment a politician or a public policy.  And why wouldn’t they?  After all, Henry Howell is the icon of the politician no one could own and who never let up fighting the most powerful forces against change in Virginia, often completely alone with every other elected white office holder shunning him in every gathering. There were very lonely times along his journey.

Which brings me to the Roanoke Times editorial this morning, strangely comparing State Senator David Suetterlein (R) to Henry Howell. Why do they do that?  Because the Senator, on behalf of some powerful corporations who want to move to renewable energy in Virginia, challenged VEPCO, the Virginia public service corporation that Dominion Energy wholly owns. (Henry Howell said that VEPCO stood for “Very Expensive Power Company.) The Senator’s effort failed miserably, thanks to his colleagues, but his corporate friends were probably satisfied with his effort.

The second reason that the Roanoke Times gave for comparing Senator Suetterlein to Henry Howell is because the Senator made an empty effort at addressing the rising costs of higher education in Virginia, a phenomenon arising from the Republicans’ decade-long underfunding of public education in Virginia. Public meetings on increases in college tuition are like rearranging the chairs on the deck of the Titanic.  Looks good, but does not postpone your demise.

So…no, Senator Suetterlein is certainly no Henry Howell. Having said that, it’s true that my father would take help from any quarter to move his working-class agenda along in the body politic. He would embrace ANYONE joining the cause for political and economic justice. So if Henry Howell were alive today, he would most likely thank Senator Suetterlein and encourage him to keep moving towards ending the control of Dominion Energy over the government of Virginia. Henry Howell would probably add that Suetterlein’s efforts are at least more than Dick Saslaw would ever do to challenge Dominion Energy.