Then there’s VPAP “Sunshine Caucus” Unintentionally Ironic, Shark-Jumpingly Absurd, which explained that VPAP’s money comes from…well, some folks who are not exactly about “public access,” “transparency” or “sunshine.” For instance, 2016 donors to VPAP included some of these fine corporate citizens: Verizon, Dominion (of course!), Altria (aka, Philip Morris), Comcast, the Virginia Automobile Dealers Association, Smithfield Foods (pretty much the worst of of the worst, whether you care about the environment, humans or animals), McGuireWoods Consulting (aka, Virginia’s “shadow government”), Appalachian Power Company (coal-fired polluters), etc. That same story noted VPAP was honoring, as part of its “Sunshine Caucus” no less, some of the most corrupt members of the legislature at the time, including Speaker Bill “ALEC” Howell, as well as  Del. Peter Farrell, who – as Jeff Thomas explains in his book – is the son of Dominion CEO Thomas Farrell and the nephew/godson of McGuireWoods Chairman Richard Cullen, basically handpicked for the Virginia House of Delegates, no stinkin’ democracy required; Senate Majority Leader Tommy Norment, literally caught in bed with a lobbyist and also the guy who launched a “premeditated, punitive” “assault” on the Virginia Statehouse press corps last year; Senate Minority Leader Dick Saslaw, who has argued that ethics laws are unnecessary and irrelevant; etc, etc.

There also was VPAP Jumps the Shark. Then Jumps It Again. And Again. Heck, VPAP Jumps “Both Sides” of the Shark., which explained how VPAP had announced a change in its policy for inclusion of news sources in its morning news headlines, but how the explanation and conclusion made no sense whatsoever; were self contradictory, un-self-aware and/or flat-out dishonest; perpetuated one of the worst aspects of the corporate media, which is “both sides-ism”; etc. And, of course, VPAP – heavily funded by Dominion Energy, Altria, and others we’re not fans of – continues to refuse to link to progressive, environmental Blue Virginia. Coincidental? Uh, don’t think so!

Speaking of which, check out VPAP’s latest (see image, below),  namely an email referring to a “Democratic-funded gerrymandering lawsuit.” Does that language strike you as a bit…I dunno, biased? I mean, first of all, it wasn’t just “gerrymandering.” In fact, according to a federal court, it was a clear case of racial packing, with “overwhelming evidence” that “the state has sorted voters into districts  based on the color of their skin.” Actually, it wasn’t even by the “state,” so much as by House Republicans. Anyway, VPAP mentions none of these things, but instead focuses in on the fact that Democrats fought back against the Republicans’ unconstitutional racial packing by – gasp! – helping to fund a lawsuit against it. Which, by the way, is a perfectly normal and responsible thing to do. So why is VPAP stressing the “Democratic-funded” part, and why is VPAP labeling the Republicans’ egregious racial packing with the relatively benign word “gerrymandering?” Perhaps because VPAP is *not* actually a neutral arbiter, but in fact is heavily funded by – and heavily biased towards – Republicans (and corporate interests, like Dominion Energy)?  Just a wild theory, ya know? 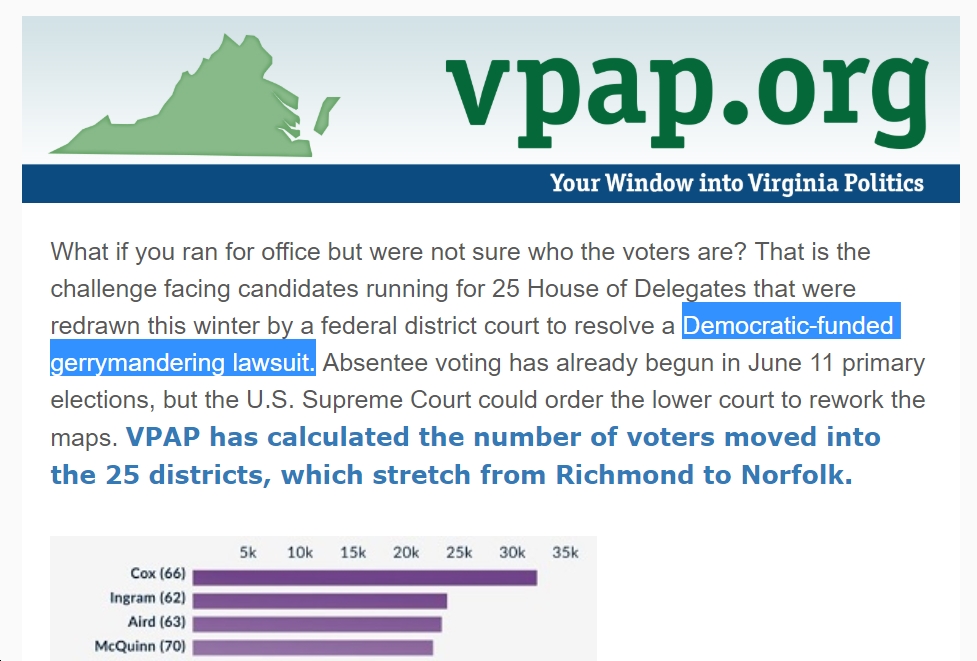