Two recent incidents – one nationally, one right here in Virginia – highlight the deep, glaring insecurities of right-wing men in this country. First, see the following screenshot of far-right, white supremacist, etc. Fox “News” host Tucker Carlson attacking Chris Hayes for…yeah, wearing glasses! LOL  Oh, and for being (as we all should, if we have any scientific knowledge or concern for the future of life on this planet whatsoever) “deeply, deeply concerned about global warming.” So, somehow, in the warped world of right-wing men like Tucker Carlson, those are not only *bad* things, but somehow are an insidious indicator of “what every man would be if feminists ever achieved absolute power in this country.” Which gives away the game right there, of course: right-wing men like Tucker Carlson are clearly terrified of losing power to women. Can they be any more obvious about it? 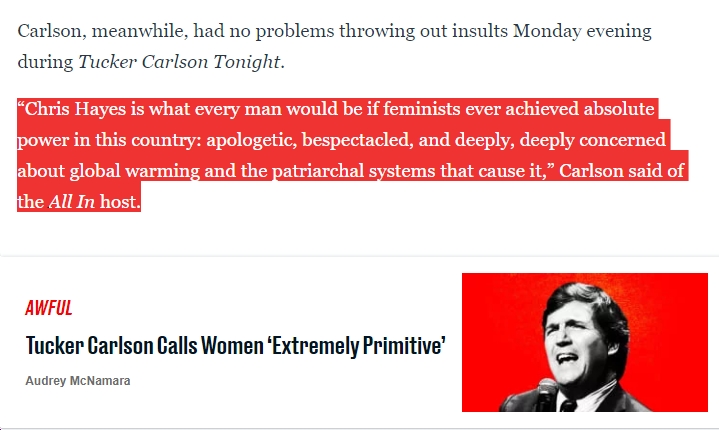 Next, check out the following two posts from our old pal Fredy Burgos, who is SO extreme — see Burgos’ recent anti-Semitic outburst, as well as his anti-LGBT, anti-Muslim, racist and fascistic (e.g., pro-Pinochet!) rhetoric —  that even Virginia Republicans couldn’t take it anymore and kicked him out of the party. So now, Burgos is baaaack, and he’s attacking Republican-turned-Independent Kyle McDaniel, who is now running for Fairfax County School Board against Burgos’ far-right pal Elizabeth Schultz. What’s revealing isn’t that Burgos is attacking McDaniel, but *how* he attacks McDaniel, by calling him…wait for it…”Soy Boy.” What the hell is a “Soy Boy,” you ask? According to the ever-handy Urban Dictionary:

“Slang used to describe males who completely and utterly lack all necessary masculine qualities. This pathetic state is usually achieved by an over-indulgence of emasculating products and/or ideologies.

The origin of the term derives from the negative effects soy consumption has been proven to have on the male physique and libido.

The average soy boy is a feminist, nonathletic, has never been in a fight, will probably marry the first girl that has sex with him, and likely reduces all his arguments to labeling the opposition as ‘Nazis’.”

So yeah, again, it’s deep fears by right-wing men of being emasculated, in this case by eating a plant-based diet (which, by the way, is far superior in terms of health, environment, etc. to a dead-animal-based diet). Note that there’s *zero* evidence of eating a plant-based diet turning men into “a feminist, nonathletic…never been in a fight,” blah blah blah. But in the warped world of Tucker Carlson, Fredy Burgos and their ilk, that’s apparently their deepest fear – women gaining power, men losing power, and even men becoming less macho/violent/”masculine.” I know, the horror! the horror!

Thomas Zimmer on the “Clear and Present Danger” of the Trumpified, Anti-Democracy GOP: “most Republicans are united in their quest to install authoritarian rule...