UPDATE Monday AM: See below for video of NBC Washington’s story on this, which says Gov. Northam canceled his appearance about an hour before he was supposed to be there “out of safety concerns” (like…what???). Sen. Marsden says Northam has “been an effective leader” and “we want to work with him.”

UPDATE 6:07 pm – NBC 4 just reported that Northam canceled about an hour before he was supposed to be at the event because of “safety concerns.” Sen. Marsden was on camera defending Northam…

Early last week, news came out that Gov. Ralph Northam would be attending a campaign kickoff event for State Sen. Dave Marsden (D) in Burke. That spurred the Fairfax County NAACP to organize a protest, and apparently – see Fairfax County NAACP President Kofi Annan’s post below – deterred Northam from attending, after all that. So now, about 2 1/2 months since the “blackface” scandal first broke, we basically have seen a few signs of Northam attempting to return to “normalcy,” combined with other signs that “normalcy” with this governorship might never happen. I mean, if Northam can only attend events in semi-secret, when they haven’t been announced in advance and/or publicly, can’t go on “Ask the Governor” or hit the campaign trail, what does that really leave? I suppose he can stay in the Governor’s Mansion, sign and/or veto bills, and…I dunno, meet with Dominion CEO Tom Farrell? Heh. But seriously, I really don’t see how avoidance – such as the way that Northam has refused to meet with the people of Union Hill, or along the ACP and MVP pipeline routes – is going to work in the long term. Nor should it work, really, as the governor *should* be meeting with people, including those who disagree with him or her.

With that, see below for some photos and video from the event, as well as a photo of anti-abortion and right-wing protesters (organized in part by the Fairfax County GOP), who of course have absolutely no standing to be protesting anything, given that the Republican Party is the party of Donald Trump, “good people on both sides,” neo-Confederate Corey Stewart, white nationalism, etc, etc. Screw them. 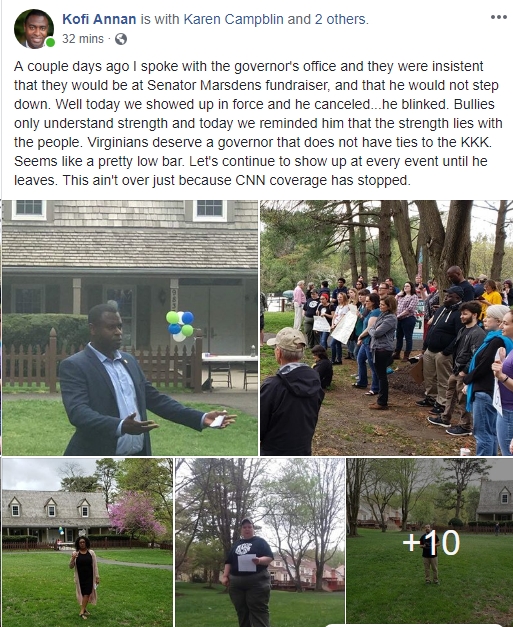