See below for some analysis by Chaz Nuttycombe and me of two key 2019 Virginia races: HD40 and SD8.

First, here’s HD40, which Chaz rates as “Toss-Up,” noting that Democratic nominee Dan Helmer is a “fundraising machine” and a “decently strong candidate,” while the district is “the last Republican district inside NoVA (besides HD-33 which stretches to Frederick County and voted for Trump/Gillespie/Stewart). Clinton +8.45, Northam +10.53, Kaine +18.85 district.” Of course, as Chaz points out, “In 2017, Hugo still managed to hold on despite Northam carrying the district.” So…yeah, I agree with Chaz that this one’s a toss-up. 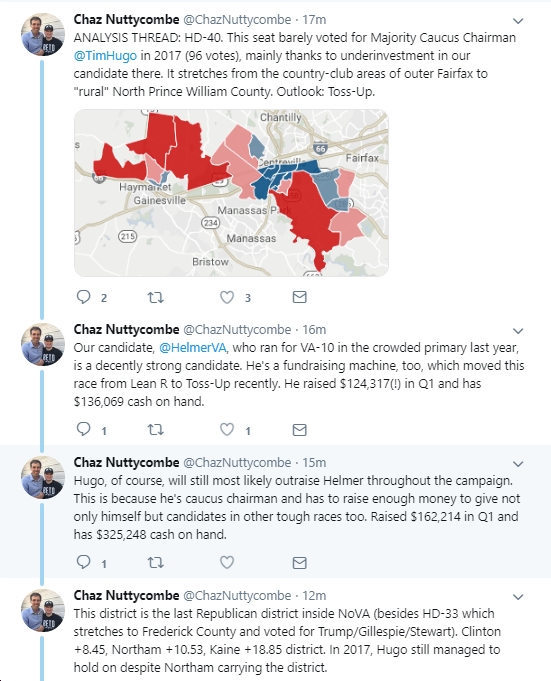 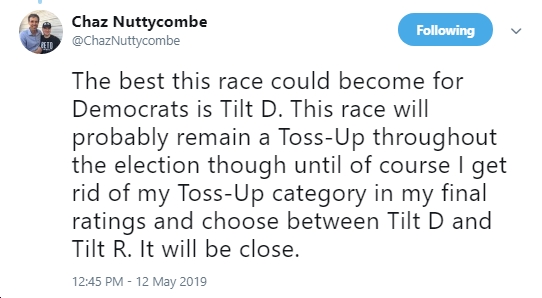 As for SD8, this is a Virginia Beach district that went 52%-46% for Tim Kaine in 2018, 50%-49% for Ralph Northam in 2017, and 51%-42% for Trump in 2016. It’s been (mis)represented in the State Senate since 2015 by Republican Bill DeSteph, who is…uh…a character? For more on DeSteph, see He’s Just a Genie in a Bottle…Virginia State Sen. Bill DeSteph (R) Wore Costume with “Rub Me” Lamp “Protruding from Crotch” and Bill DeSteph: “Muslems Build Mosques to Represent Islamic Supremacy Over Their Enemy.” I know, gack.

In stark contrast, DeSteph’s Democratic opponent is the super-impressive Missy Cotter Smasal, who among other things was “a surface warfare officer and drove a ship in the Persian Gulf during Operation Enduring Freedom.” As Chaz Nuttycombe points out, having military experience is a major plus in a district like this one, where so many serve, have served, and/or work in and around the military. It clearly helped former Surface Warfare Officer and now Rep. Elaine Luria (D) in her campaign in November 2018. And hopefully it will do the same for…yep, Surface Warfare Officer Missy Cotter Smasal in November 2019!

Other thoughts on this race, per Chaz: DeSteph doesn’t appear to be well-liked in his community, for whatever reason(s); “Smasal is one of the strongest recruits we’ve got” this cycle; “She’s got Elaine Luria’s [top-notch staff],” and the “best case scenario is [the race] becoming a toss-up.” Let’s all work to make that happen, and then to push Smasal over the top – even if it’s by one vote – on November 5!