The latest from Virginia political analyst Chaz Nuttycombe looks at the super-gerrymandered (by Republicans) HD-88 (Stafford County, Spotsylvania County, Fredericksburg City, Fauquier County), a bright-red (55% Donald Trump, 54% Ed Gillespie and 50% Corey Stewart) district, currently (mis)represented by hard-right Del. Mark Cole (R). So yeah, this one is “Likely R” according to Chaz (I agree), and that’s only if Democrats nominate our strongest candidate in the primary, which according to Chaz (again, I agree) is Jess Foster. As for Cole, this is the guy who wrote a redistricting bill that was given an “F” grade and called a “travesty” by an analyst from the Princeton Gerrymandering Project. Cole also wants to make it HARDER for Virginians – particularly poor people, immigrants, etc. – to vote; and who has the usual, horrendously bad interest group ratings you’d expect from a right wingnut like him (e.g., lots of zeroes from NARAL and Equality Virginia, lots of 100% ratings from the gun lobby, a 100% rating from the theocratic “Family Foundation”…). The sad thing is that anyone has to be represented by someone like this, but that’s who this deep-red district voted for, so who the hell knows. 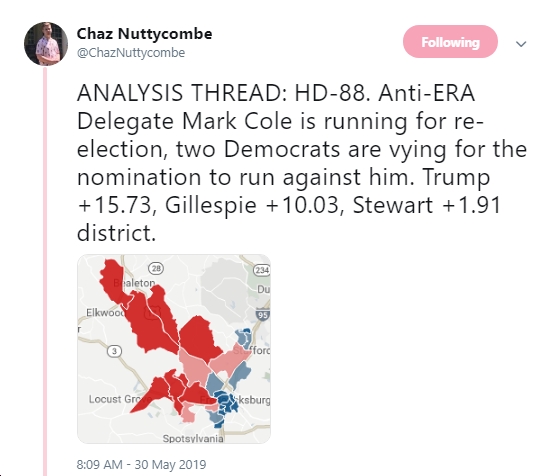 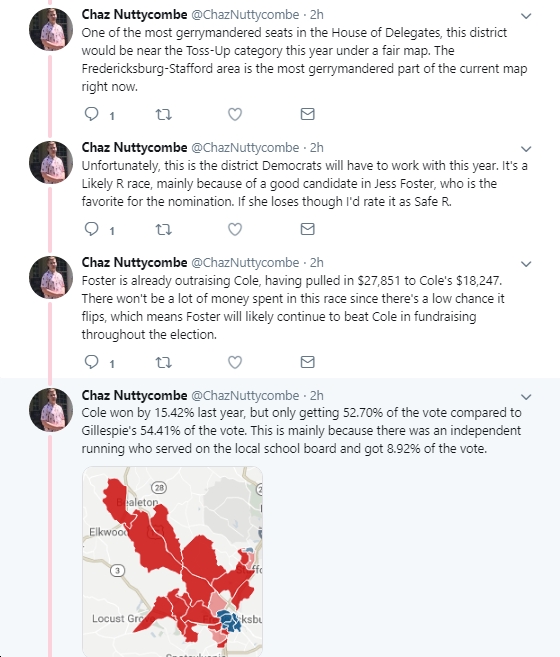