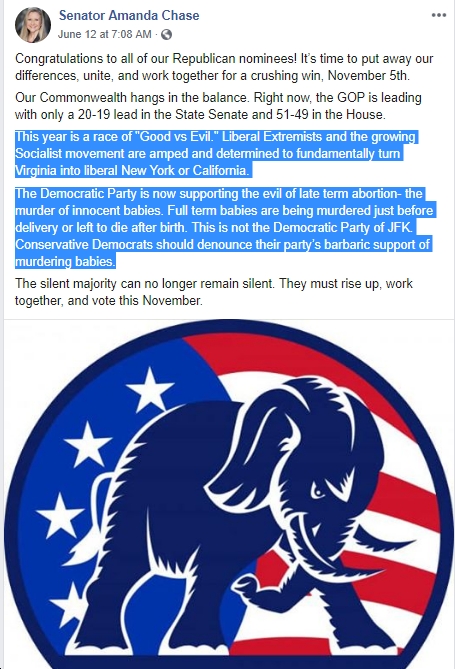 Just a reminder of what Democrats in Virginia, and really across the country, are up against these days: Republicans like Virginia State Sen. Amanda Chase (R-SD11), who posted on her Facebook page (see screenshot at, appropriately, the FAR right of this page – lol) that:

“This year is a race of ‘Good vs. Evil.” Liberal Extremists and the growing Socialist movement are amped and determined to fundamentally turn Virginia into liberal New York or California.

The top-rated responses to this post on Chase’s page are excellent. Here are a few that caught my eye (note: very few even tried to defend Chase’s indefensible comments):

I’d emphasize that in claiming all Democrats are “evil,” that Amanda Chase is calling half of her own constituents (50% of SD11 voters went for Tim Kaine last November; 46% went for Ralph Northam in 2017) “evil.” Heck, that’s even worse than when Mitt Romney wrote off 47% of Americans as people who “are dependent upon government, who believe that they are victims, who believe the government has a responsibility to care for them, who believe that they are ENTITLED to health care, to food, to housing, to you-name-it.” But in a way it’s the same type of “thinking” – in Romney’s case, denigrating around half of Americans, and in Chase’s case claiming around half of her own district is “evil.”

Oh, and let’s make sure we help elect Democrat Amanda Pohl (see my endorsement here) this November. In STARK contrast the constant stream of viciousness Chase spews out, Pohl believes in “The Value of Valuing People.” Also see Pohl’s Reflection After Another Gun-Related Tragedy, This Time in Virginia Beach and her highly moving, The Moment I Decided to Run. The bottom line is that SD11 can do a *gazillion* times better than the type of behavior we see on an almost daily basis by Amanda Chase. Fortunately, Democrats on June 11 nominated just the right person – Amanda Pohl – to make that a reality.