I wrote recently about the Fairfax GOP’s slate of far-right School Board candidates. One of those candidates, endorsed by the Fairfax GOP back in April, is Cheryl Buford (running for an at-large seat), who last ran for office in 2017, losing to Del. Kathleen Murphy by a whopping 61%-39% margin. See here for Buford’s (vague) stances on the issues, including her opposition to the “One Fairfax” policy and her (false) claim that the Fairfax County School Board “has devolved into a hyper-partisan body” (note: the one exception to that would be far-right Republican Elizabeth Schultz, who among her rantings has stated that gun violence prevention is “not a job for traumatized children“). Also, see below for some information on Buford that should help motivate Fairfax Democrats to support our own at-large School Board endorsees – Abrar Omeish, Rachna Sizemore Heizer and Karen Keys-Gamarra – this November over right wingers like Cheryl Buford.

First, here’s an excerpt on Buford from Del. Rip Sullivan’s Project Blue Dominion back in 2017. Note that Buford has apparently agreed with Benghazi conspiracy theories, celebrated a Fox News article “claiming that legal marijuana dispensaries are being targeted by gangs,” expressed her hatred for the Affordable Care Act, seemed to agree that “women not marrying early harms them,” etc. All of this should be automatically disqualifying for School Board, of course, as it indicates that Buford’s a far-right nutter, basically. 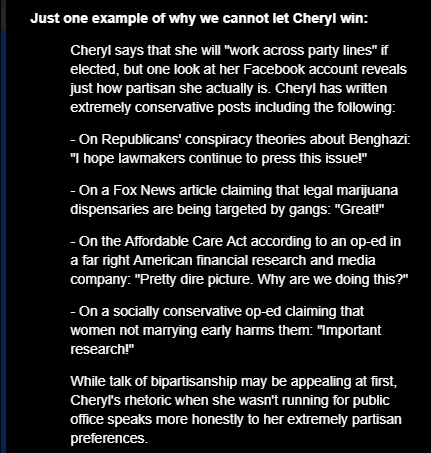 Then we have this, from the Alexandria Gazette back in the fall of 2017, reporting on Buford having “struggled to answer questions about her own campaign platform.” For instance, she “says she wants to reduce regulations,” but “couldn’t name any specific ones she would spike.” And she had no specific proposals on dealing with another one of her priorities – combating the opioid crisis. #FAIL 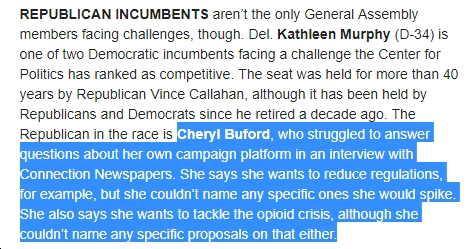 As if that’s not all disqualifying enough, Buford also donated $650 to extremist, bigot, science denier, etc. Ken Cuccinelli. Yep, the guy who compared immigrant families to “rats,” and who just the other day disgustingly blamed the desperate father for the tragic deaths of himself and his daughter in the horrific, now-famous photo of their drownings… 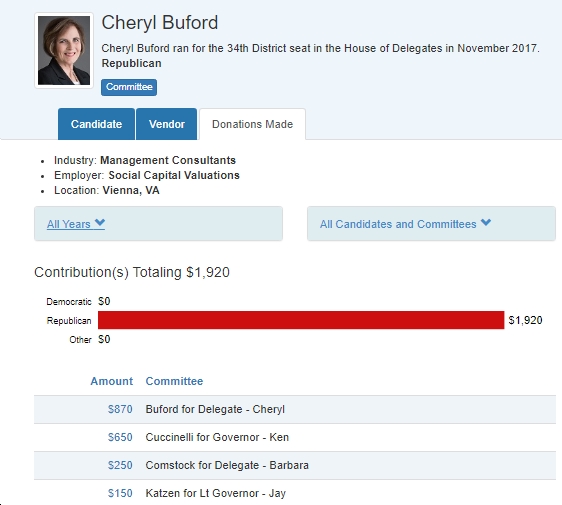 But wait, there’s more! Buford also worked for around six years at the “Institutional Religious Freedom Alliance,” which boasts about this 2014 letter urging President Obama to allow federal contractors to discriminate against LGBTQ people on religious grounds. In addition to all the other crap listed above, do Fairfax voters really want someone who apparently shares these anti-LGBTQ views on their county’s School Board?

Last but certainly not least, check out Buford’s callous comments regarding Del. Kathleen Murphy’s advocacy on behalf of gun violence prevention. According to Buford: “‘Losing a brother is devastating, but I’m not really sure it warrants all the attention she’s spent’ on that issue.” Great, huh? Yeah…nope. Again, let’s make sure that this November, neither Buford nor any of the other Fairfax GOP School Board nominees is elected.

P.S. Where the hell do Republicans find these people???