The following is from Sen. Scott Surovell’s office. Also, since the WaPo article failed to actually post the offensive, racist, etc. tweets by John Gray, see the Blue Virginia post here, and note that it (as usual) has MUCH more complete information on Virginia politics than the corporate media…

Woodbridge, Virginia – Senators Scott Surovell and Jeremy McPike, Delegates John Bell and Elizabeth Guzman, and Democratic candidates for local offices will host a press conference on Thursday, September 26 at 3:15 p.m. The candidates will discuss recently uncovered tweets from Prince William County Board of Supervisors Chair Republican nominee John Gray. Some examples of the tweets are included below. The Washington Post featured Gray’s tweets in a recent article here: https://www.washingtonpost.com/local/virginia-politics/he-deleted-his-offensive-tweets-but-his-political-opponent-found-them-anyway/2019/09/23/

Surovell said he believes this behavior shows that Gray is not qualified to hold office in Prince William County. “I think it is important that every Republican on the PWC ticket take a position on where they stand on him and his ideas given that they will have to work directly with him if he were to win and they are in the same party,” Surovell said.

Senator Scott A. Surovell represents parts of Fairfax, Prince William, and Stafford Counties since 2015. Prior to his time in the Senate, Surovell served six years in the House of Delegates. Surovell lives in Mt. Vernon with his wife and four children. He practices law and has dedicated his legislative career to fighting for Northern Virginia’s fair share, protecting consumers, and preserving our environment for future generations. 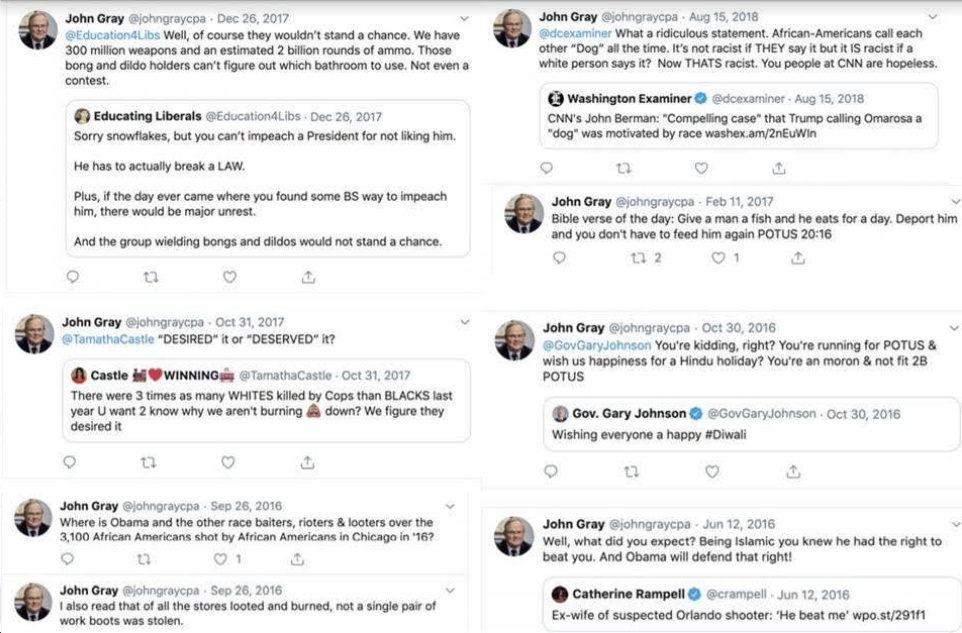 Here’s some video of the event.

Sen. Surovell said: “John Gray…has a history of very horrific things that he’s said…everybody running for office needs to have a clear position on [them]…the Republican Party of Prince William County has nominated a misogynistic, bigoted racist to lead the county government…This county is now about 55% minority…and many of the things John Gray has said…basically condemns probably 2/3 of the people he seeks to represent in very harsh, awful, horrific, extreme language. His rhetoric is anti-woman, anti-African American, anti-Latino, anti-gay, anti-Muslim…Any candidate who refuses to repudiate his behavior is telling Prince William County residents that they will tolerate misogyny, bigotry and hatred. We deserve to know where every single Republican running in this county stands on his candidacy.”

Sen. Jeremy McPike: “To have a candidate nominated by the Republican Party [like John Gray]…is embarrassing. Every Republican running for office should denounce his candidacy and reject it today. No more waiting, no more excuses, no more apologies. This is our county, we will lead it…with the diversity we represent as candidates and we will lead this county forward.”

Ann Wheeler: “The tone of these tweets is really despicable…against so many people who live here, it’s just unacceptable…These are the kind of views we don’t want to see in Prince William County.”

Kenny Boddye: “In short, we have someone who’s not only unfit to hold any elected office, but especially elected office in the most diverse community in the Commonwealth of Virginia.”