Far-right Virginia State Senator Amanda Chase (R-SD11) has been busy lately, announcing her intention to run for Governor…in six years, but who’s counting? Of course, Chase almost certainly won’t be elected statewide in Virginia in six years, sixteen years or sixty years, because she’s just too crazy and extreme. How crazy and extreme? Recall that Chase once said,  “It’s those who are naive and unprepared that end up raped” and “I Call My Revolver My Little Equal Rights Amendment” and “The ERA Amendment is nothing more than a ploy by the left to eliminate gender altogether.” and…anyway, you get the idea.

Meanwhile, with just 22 days until Virginia voters head to the polls in Chase’s district and through the state, our good State Senator is desperately trying to hold on to her seat, which – in the aftermath of Chase getting herself kicked out of the Chesterfield GOP – Ben “Not Larry Sabato” Tribbett just moved from “Likely GOP” to “Leans GOP.” So clearly, Chase is worried, and her Democratic opponent, Amanda Pohl, senses opportunity.

So what’s an embattled incumbent, especially an extreme right-wing one, to do at a time like this? In Chase’s case, the answer is clear: demagoguery and fearmongering, specifically about the dangers of an imminent SOCIALIST takeover of Virginia, and the demise of all your FREEDOMS!!! Sounds scary, eh? Except…no, it’s just ridiculous, but that’s all Chase and her fellow Republicans, with no positive vision or popular policies of their own, have to offer at this point – stoking imaginary fears.

So will this work? You never know, I suppose, but so far, it’s certainly not getting a warm reception on Chase’s Facebook page. See below for video of her latest over-the-top idiocy, followed by reactions in the comments section. Note that almost all the comments and “likes” so far are NOT in agreement with Chase. Instead, comments are more along the lines of “I can’t wait to vote against you now and when you run for governor” and “I don’t think you know the definition of either.” and “Seriously, that’s all you’ve got? Completely ridiculous. We are going to be voting for freedom from this nonsense, that’s for sure!!” 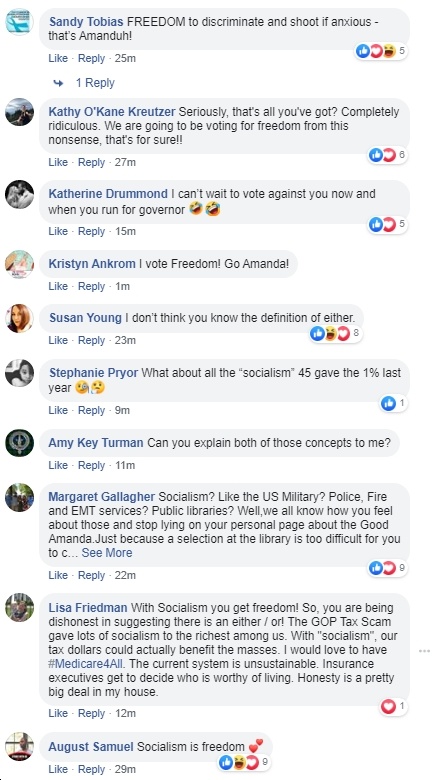