As we know, Republicans have had a (very) rough time in Virginia the past few years, failing to win a statewide election since 2009, losing three of their seven U.S. House seats from Virginia last November (they’re now down to four seats out of 11), and increasingly losing ground in suburban parts of the state. Those suburban areas certainly include Northern Virginia, where Republicans are currently in danger of being marginalized even further, with crucial elections coming up for control of the Loudoun and Prince William County Boards of Supervisors, as well as to see whether the last-remaining Virginia Republican Delegate (Tim Hugo) can hang on, etc.

Then there’s Fairfax County, the largest jurisdiction in Virginia with nearly 1.2 million people, where currently, there are only two Republicans (Pat Herrity and John Cook) left on the 10-member Fairfax County Board of Supervisors. That includes one (Cook) who wisely opted not to run for reelection in his increasingly Democratic magisterial district (Braddock), given that he was likely to get his butt kicked by Democrat James Walkinshaw.

So that leaves incumbent Pat Herrity hanging on for dear life in the increasingly blue (e.g., went 2:1 for Tim Kaine last November) Springfield magisterial district as the only Republican with a serious shot at being on the Fairfax County Board of Supervisors come January 2020. Given his district’s Democratic lean, you’d think that Herrity might actually wise up and run more to the political “center.” But…nope, not in today’s far-right, Trump Republican Party. Instead, Herrity has decided to run a Corey Stewart-style, immigrant-bashing, xenophobic, fear-mongering, demagogic campaign, playing ONLY to his “base,” and most certainly not tacking towards the middle.

Evidence? Check out the following Pat Herrity mail pieces, in which he: 1) says “Fairfax County Can’t Afford An Entirely Democrat [sic] Board” because of its supposedly “extreme policies” (that’s a flat-out lie, of course); 2) argues that one of the reasons for this is that Democrats might push for “State Action On Gun Control” (horrible, eh?); 3) also argues that Fairfax should vote Republican because, if not, the county might “approve budget for legal fund for illegal immigrants”; and 4) ratchets up the fearmongering, xenophobia and demagoguery with the “USE YOUR DOLLARS TO FIGHT DEPORTATION FOR ILLEGAL IMMIGRANTS” language, in ALL CAPS no less.

In short, Pat Herrity is doing his best Donald Trump/Corey Stewart imitation in Fairfax County. The question is, will that approach work in a county that voted AGAINST Donald Trump by a massive (355k-158k) margin in 2016, and which then voted overwhelmingly for Ralph Northam in 2017 and for Democrats Tim Kaine, Gerry Connolly and Jennifer Wexton in 2018? I mean, good luck with *that* strategy, right? LOL

Fortunately, Springfield district voters have a much better option on November 5th – Democrat Linda Sperling – “an award-winning marketing executive, former college professor, long-time Fairfax County resident, product of Fairfax County Public Schools and mom of two future FCPS students who “is running to represent the Springfield District on the Fairfax County Board of Supervisors because her proven business expertise, community leadership, extensive knowledge of the county and perspective as the working mother of two young children will bring new energy, fresh ideas and innovative solutions to the tough challenges being faced throughout the county.” On the issues, Sperling wants such radical things as a strong economy, good jobs, affordable housing, reduced traffic congestion, a high-quality education for “every single child in Fairfax County,” and being “a leader when it comes to protecting the environment, not a follower.” In short, Linda Sperling is everything that Pat Herrity isn’t – and that is a very, very good thing. I urge everyone to support Linda Sperling, and to reject the nasty, divisive, backwards-looking views of Fairfax’s last-remaining County Board Republican.

P.S. Almost forgot to mention that Herrity’s on the ballot in Springfield district with far-right School Board member Elizabeth Schultz (R), who most recently went on Sebastian Gorka’s radio show to rail against “radicals who believe in identity politics” and that “we can no longer have a Eurocentric history.” And yes, Schultz is actually arguing that, in a county which is heavily populated by people from all over the world, that the school system should be centered on teaching about Europe, as opposed to Asia, Africa, Latin America, etc. What is *that* all about? Seems pretty obvious. 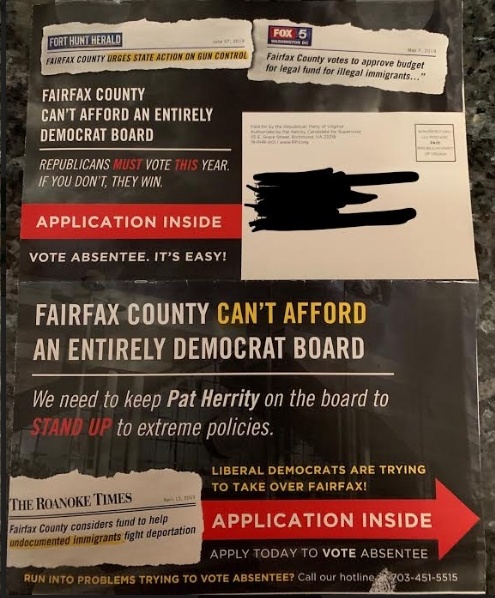 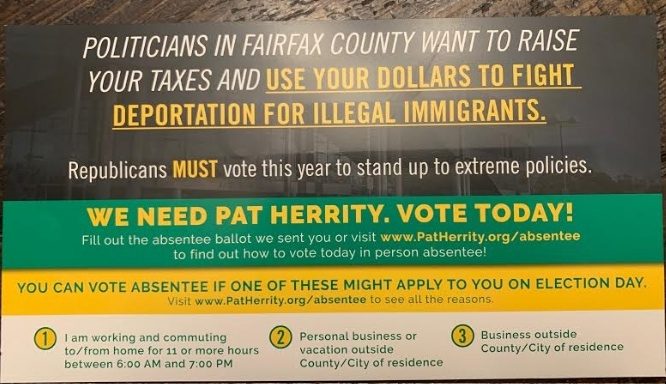