I posted yesterday on who might end up chairing Virginia House of Delegates committees, now that Democrats control that chamber by a 55-45 margin. What about the State Senate, where Democrats have a narrow, 21-19 edge? See below for what I’ve gathered.

Also note that, as with the House of Delegates, Senate committees and subcommittees – composition and leadership – are going to change dramatically, which will have *huge* implications for which bills live and which bills die.  The importance of this, for all of us who have watched great bill after great bill die in Republican-controlled committees and subcommittees, really can’t be overstated. See below for the current list of Senate committees and membership. Note that on each committee, members are listed in descending order of seniority on that committee (e.g., not in the Senate overall). And seniority definitely matters, although ultimately the Majority Leader (Dick Saslaw) has some power – I’m not clear how much exactly – in this area.

Finally, note that under Republicans, key committees were *not* proportional to the overall 21 R-19 D split, but were instead *stacked* with Republicans. For instance, Senate Finance was 10-5 Republican; Commerce and Labor was 10-4 Republican; Rules was 11-3 Republican; etc. Presumably, Democrats are going to do the same sort of thing when they’re in charge, but we’ll see…

With that, here are the committees and who might chair each one.

P.S. Note that, unlike the House of Delegates, which has been controlled by Republicans for ages, the Senate has been under Democratic control or shared control more recently, so the committees aren’t stacked with numerous Democrats who were hand picked by Republicans.

Agriculture, Conservation and Natural Resources: Likely will be chaired by Sen. Chap Petersen, who is the ranking Democrat on the committee. Next in line would be Sen. Dave Marsden.

Commerce and Labor: Sen. Dick Saslaw is ranking Democratic member, and will likely be this committee’s Chair.  Next in line is Sen. Louise Lucas, who I hear will probably chair Education and Health.

Finance: The ranking Democratic members on this powerful committee are Sen. Janet Howell, Sen. Dick Saslaw and Sen. Louise Lucas. This one will likely go to Sen. Howell. I’m told, by the way, that Sen. Saslaw actually went out of his way to make sure Sen. Howell would have seniority over him on Finance, because it had never been chaired by a woman.

General Laws and Technology:  This one will likely to go either to ranking Democratic member Sen. Mamie Locke or next-in-seniority Sen. George Barker.

Local Government:  Sen. Dave Marsden is ranking Democrat on this committee, followed by Sen. Barbara Favola, Sen. Lynwood Lewis and Sen. Scott Surovell. However, Sen. Marsden might end up chairing Transportation, and Sen. Favola might end up chairing Rehabilitation and Social Services. If so, then Sen. Lewis would chair this committee…or if not, then Sen. Surovell. Yep, it’s like musical chairs!

Privileges and Elections: Sen. Janet Howell is the ranking Democrat on this committee, followed by Sen. Creigh Deeds, Sen. John Edwards and Sen. Adam Ebbin. I hear that this one could be chaired by Sen. Adam Ebbin (assuming Sen. Howell chairs Finance, Sen. Edwards chairs Rules or Courts, and Sen. Deeds chairs Courts).

Rules: Sen. Dick Saslaw is the ranking Democrat, but since he’s probably going to be Chair of Commerce and Labor, this committee will probably be chaired by Sen. Mamie Locke or possibly Sen. John Edwards, who has previously chaired this committee when Democrats had the majority.

Transportation: Sen. Creigh Deeds is ranking member, so it depends on whether or not he chairs Courts. If not, then this committee will probably be chaired by Sen. Dave Marsden.

Also, the following leadership positions are up for a vote next Wednesday (November 20). 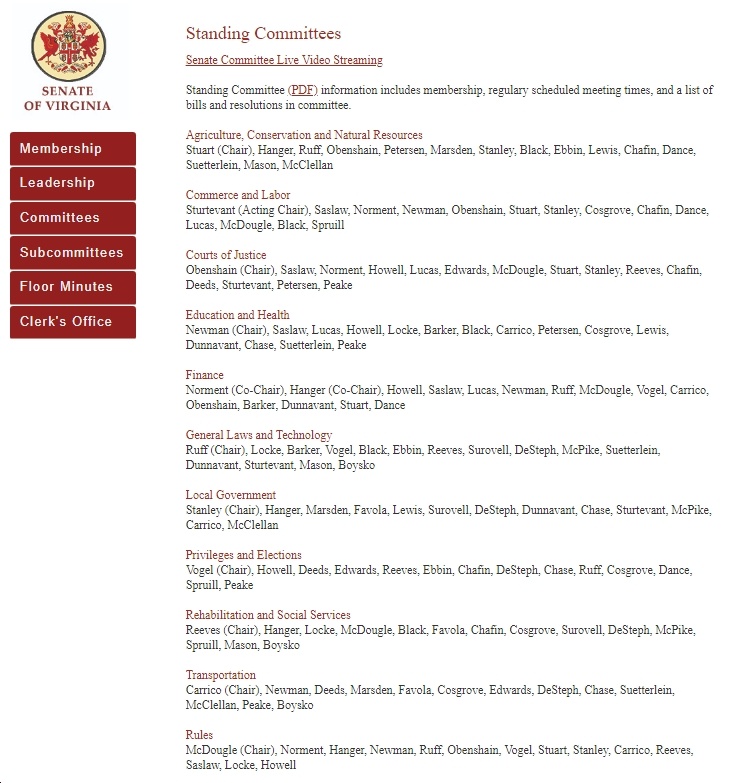