In fairness, Del. Dave LaRock (R-HD33; parts of Loudoun/Frederick/Clarke Counties) is one of the craziest and most far-right members of the Virginia General Assembly, but still…check out his latest, below. That’s right, Del. LaRock wants to ditch Arlington, Alexandria, and “the beltway” (which would presumably include Falls Church and a good chunk of Fairfax County) and give those areas to Washington, D.C. Which would, of course, remove an enormous chunk of Virginia’s strongest area economically – the “economic engine” of Virginia, as former Gov. Bob McDonnell correctly called it, and the biggest “net donor” in terms of funding to the rest of the state – from the Commonwealth. In turn, that would badly hurt districts like LaRock’s HD33.

So why on earth would LaRock propose this, then? Because, as he says, he’s horrified about Virginia “becoming more like California and New York,” whatever that means exactly (presumably, LaRock is referring to voting Democratic and supporting a wide array of progressive policies, both of which he hates with a burning passion). Now here’s a better idea: how about HD33 voters ditch LaRock in 2021, replacing him either with a sane Republican, an independent, or, better yet a Democrat? Because, the fact is, LaRock is not a serious or effective delegate, plus he’s an embarrassment, as you can see from this, this, this and this. 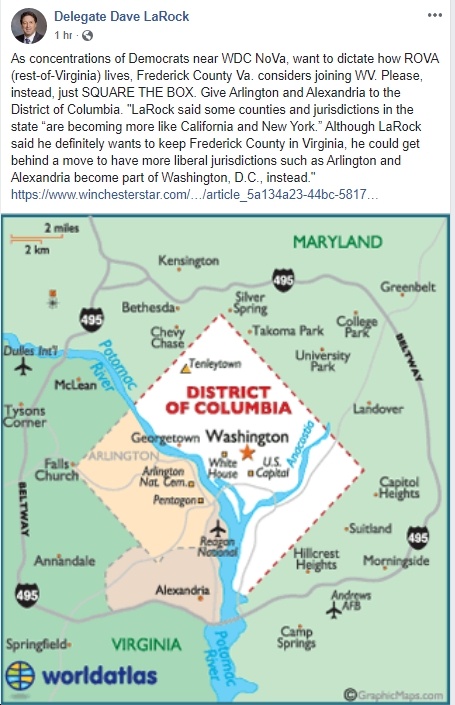 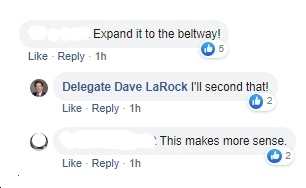 The VA State Police's own stats show that "Virginia experienced a 1.9% decrease in violent crime offenses [in 2020] compared to 2019." So what's Youngkin basing this supposed "rise in violent crime" on exactly? Does he know something the VA police don't? https://bluevirginia.us/2022/05/monday-news-breaking-climate-vows-would-be-monstrous-self-harm-the-buffalo-shooters-views-are-mainstream-on-the-right-democracy-is-at-stake-in-the-midterms-the#comment-5859109850