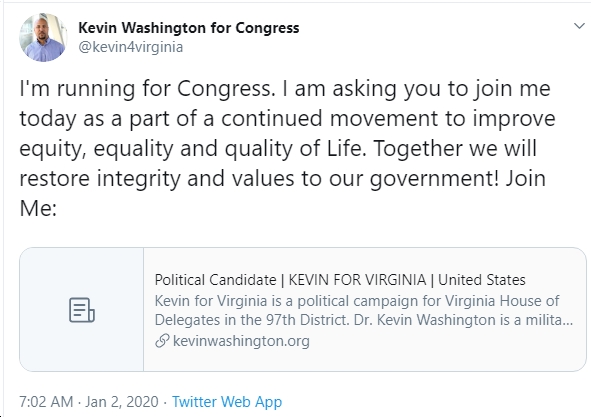 With this morning’s announcement by Kevin Washington for Congress, there are now two Democrats – the other being 2018 Democratic nominee Vangie Williams – running to take on right-wingnut Rep. Rob Wittman (R) in VA01. For more on why Wittman’s awful and needs to go, see:

As for Kevin Washington, he ran this past year in *overwhelmingly* Republican House of Delegates district 97 – went 68%-27% for Trump in 2016 and 65%-33% for Corey Stewart over Tim Kaine in 2018 – and got 26.6% of the vote. Washington describes himself as “a husband, father and Christian man” who “had the pleasure of serving in the United States Army,” where he “completed a combat tour in Iraq during OIF (Operation Iraqi Freedom)…completed my Bachelor’s, Master’s, and Doctorate Degrees…developed a true passion for the Information Technology work I did in the Army and continued in that industry when I retired,” and “now continue[s] to serve the D.o.D as a Cloud Architect.”

Unfortunately, VA-01 is a very tough, “red” district: Corey Stewart beat Tim Kaine there 50%-48%; Ed Gillespie beat Ralph Northam 54%-45%; Trump won it by 15 points; etc.  Still, it’s worth taking on Wittman, given how awful he is. Also, you never know what might happen in a presidential election year, and of course you can’t win if you don’t play! So, thanks to Vangie Williams and Kevin Washington for stepping up to run. We’ll see if any other Democrats jump in this race, now that we’re in 2020.