In a rare space of bipartisan ecstasy, Virginia’s political leaders love to tout that Virginia is a go-to place for business. As Governor Northam put it last year when Virginia regained a #1 spot:

“One of my primary goals has been to make Virginia the number one place to do business, and to do it in a way that benefits all Virginians and every region of the Commonwealth. This recognition underscores our work to build an inclusive and diversified economy, invest in our workforce, and create quality jobs—and is proof that companies of many different sizes and industries can find a home in Virginia.”

Don’t expect any to brag about a different ranking: that, according to Oxfam analysis, when it comes where you want to be a worker,

Oxfam’s “index is based on three dimensions: wages, worker protections, and right to organize laws.” And, they make clear, this isn’t just an irrelevant academic exercise.

“there are correlations between these policies, and several indicators of quality of life for working families … states that have higher scores have longer life expectancy and lower infant mortality rates.”

The new Democratic legislative majorities have been tackling this with some success. For example, when it comes to wages, the House just passed a path toward a $15 minimum wage (with a leap to $10/hour on July 1) which will impact provide a boost at the lowest income wages.

When it comes to worker rights, a good step forward is the measure to allow public sector unionization and bargaining. 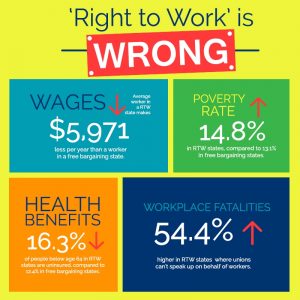 Not all efforts to better balance corporate and worker interests are moving forward.  A key space is the misnamed “Right-to-Work” which undermines unions, weakens employee protections, and, as a kicker, has a seriously racist and segregationist origin.  Many members of the Democratic House majority (with legislation from Del. Lee Carter) had their targets on ending ‘right to work’ and fostering a better balancing of employment law and working place power.  While a tough field to plow, with some serious negotiating and convincing required, from afar it appeared that the House would pass a measure to end right to work.

That is until research that asserted this would be highly damaging to Virginia’s economic prospects started to be passed around, discussed, and leveraged to kill the effort.

The Virginia Economic Development Partnership (VEDP) “raised concerns” about ending right to work. The VEDP “estimated” that, in the near term, “the Commonwealth would lose approximately $9-25 million in state general fund revenue per year” and that these losses would grow in the out years.  Like was the case with VCEA-related analytical products, however, this research merited looking under the hood.

The core basis for that VEDP conclusion? Area Development survey of business leaders.  Just imagine that basic question: “When deciding where to locate a project, would you prefer a state with high or low wages?”  How many business leaders would say “oh, my first choice is going to be where I have to pay more” no matter what the other characteristics of the location are?

As Eric Levitz put it in New York magazine:

As it happens, the primary basis for its estimate appears to be a poll taken of corporate executives and consultants who — in a shocking turn of events — said that they actually like it when states suppress the bargaining power of their workers

While Levitz agrees that businesses might prefer “Right-to-Work,” he makes clear that this isn’t a single-point decision by any business and that Virginia has much to go for it other than right to work … and that repealing right to work likely would have many secondary and tertiary benefit streams.

The concern raised by the VEDP is hardly implausible. Capital is highly mobile within the United States and the “race to the bottom” is a real phenomenon. It’s conceivable that repealing right-to-work would cost Virginia some development projects. This said, as a magnet for investment, Virginia has plenty going for it besides subpar labor standards. The state has one of best-educated workforces in the country. Its proximity to the nation’s capital makes it a natural site for military contractors and a wide range of other businesses that benefit from ready access to D.C. Beyond the ethical question of whether the state should acquiesce to the race to the bottom rather than resisting the logic of low-road capitalism, it’s far from clear that modestly increasing Virginia workers’ bargaining power would substantially reduce corporate investment in the state. Further, to the extent that labor reform does produce higher prevailing wages for Virginia workers, this could raise internal consumer demand in the state, and thus, economic growth. In 2018, a team of economists at Princeton University published a study that examined (among other things) the relationship between state-level rates of union density and per capita GDP between 1940 and 2009. They found a small positive correlation between high unionization rates and high rates of economic growth.

Perhaps end right to work would lead to healthier, happier, and more financially secure workers while, in fact, leading to even stronger economic growth in the Commonwealth.

Those who understanding these issues aren’t taking things lying down. Saturday, the Democratic Party of Virginia’s leadership will be considering the following resolution to support repeal of “Right-to-Work.” I encourage them to pass it!

Tomorrow morning, the DPVA Central Committee will vote on a resolution supporting repeal of Virginia's "right to work" laws.

"Therefore Be It Resolved that @vademocrats petitions the Virginia General Assembly to repeal Virginia’s RTW laws, Va. Code §§ 40.1-58 through 40.1-69." pic.twitter.com/K296s4zejI

Union Members Testify at State Budget Hearings, Call on General Assembly to Protect Our Progress and Invest in Working Families

VA @SenatorHashmi asks where $150 million in funding will come from for "lab schools." Youngkin's education secretary dodges. @SenatorLocke: "I don't think that quite answers the question of where the $150 million would be coming from..." https://bluevirginia.us/2022/01/my-email-to-governor-youngkins-tip-line-its-clear-who-is-using-divisive-practices-and-its-not-virginias-teachers-its-virginias-governor#comment-5711581409