Remember this past October, when far-right Sen. Amanda Chase (renegade Republican) announced that she’d be running for governor of Virginia…in 2025? At the time, the Chesterfield Observer reported:

If Chase does decide to run for governor, it’s an open question whether she’ll do so as a member of the GOP. She’s currently serving as an adviser to a startup company, America’s Ticket, that her campaign manager, Philip Search, co-founded with friend Timothy Baker. The web-based platform aims to “transform politics” by giving ordinary citizens the tools they need to run for elected office.

Well, now, as you can see in the following video posted on her Facebook page this afternoon (h/t: Washington Post for its story – appearing to confirm Chase’s 2021 plans – and Brandon Jarvis for pointing it out to me). According to Chase:

“I have a HUGE ANNOUNCEMENT!…If you believe in our Constitutional Freedoms, our 1st Amendment Rights, our 2nd Amendment Rights, supporters for Faith & Liberty and believe that Virginians deserve to live in a state of Prosperity without government controlling their lives; then please join Monday.”

So yeah, stay tuned…as one of the most extreme members of the Virginia General Assembly, someone who quit the Republican Senate caucus, who has been kicked off most Senate committees, who has gotten no legislation passed, and who was booted out of the Chesterfield County GOP, is gearing up to run for governor next year.

Finally, here’s just a short sampling o’ craziness – who Amanda Chase is, what she’s all about, and why nobody in their right mind should ever want her to be governor of Virginia. Or dog catcher of Virginia, for that matter. 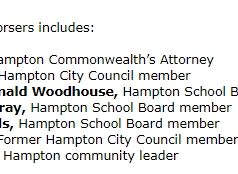 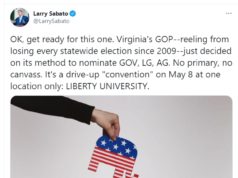 After Months of Bitter Infighting and Disarray, Virginia Republicans *FINALLY* Choose Method of Nomination for 2021 Candidates – a “Drive-Up” Convention at *Liberty University*!...