She may be crazy, irresponsible and a far-right extremist, but one thing about Sen. Amanda Chase…she never ceases to entertain, in a warped sort of way. See below for the latest example, in which the sole declared 2021 Republican candidate for governor (or possibly independent candidate for governor, if the VA GOP pisses her off enough) reacts to news reports indicating that former Gov. Terry McAuliffe is *heavily* leaning towards running in 2021 to become governor for a second time. And yes, in Virginia, you can be governor more than once…just not back-to-back.

What makes people increasingly think McAuliffe’s running, and not shooting for a Biden administration cabinet position? First of all, it’s been long rumored that McAuliffe’s very interested in being chief executive of Virginia again, as he clearly loves the job. But now, with a Democratic legislature, he must be drooling at the thought of everything he might accomplish in a second term, that he couldn’t accomplish in the first term due to Republican control of the General Assembly. Also, a couple recent newpaper articles add to the speculation:

So yeah, McAuliffe sounds almost certain to be running for governor in 2021. Which, by the way, immediately makes him the strong favorite – think extremely high name ID, basically unlimited money, high popularity among Virginia Democrats (an October 2017 Quinnipiac Poll had him at a whopping 88%-6% approval among Dems), etc, etc. – for both the Democratic nomination and for the Governor’s Mansion again.

Helping McAuliffe even more would be for multiple other Democrats, not named “Terry McAuliffe” (the names being talked about are LG Justin Fairfax, Del. Jennifer Carroll Foy, State Sen. Jennifer McClellan, AG Mark Herring) to also throw their hats in the 2021 gubernatorial ring, as that would likely just divide whatever anyone-but-TMac vote there might be out there among Dems (and again, only 6% of Virginia Democrats disapproved of McAuliffe towards the end of this governorship).

And then there’s the potential Republican opposition, which right now is stuck at Sen. Amanda Chase, a far-outside-the-mainstream right winger who would likely get annihilated in a general election against McAuliffe, whether she’s the Republican nominee or an independent candidate. But that isn’t stopping Chase from salivating at the prospect of Democrats nominating McAuliffe in 2021. Check out her Facebook post, below, in which she weirdly claims that McAuliffe has a “liberal voting record” – in fact, McAuliffe never served in a legislature, so he doesn’t have a “voting record” at all…let alone “against small business, higher taxes” (note: I’m pretty sure she doesn’t mean to charge that McAuliffe’s *against* “higher taxes,” but the English language is not exactly Chase’s strong suit).

Also unintentionally funny is Chase claiming that McAuliffe would represent “another 6 years” – that’s right, six, even though the term of office for governor is four years – “of governor[sic] Northam all over again.” Of course, given that Northam’s approval rating appears to have strongly rebounded, as is the vast majority of the Democrats’ legislative accomplishments, I’m pretty sure that Chase running for governor in 2021 by trying to claim McAuliffe is “another 6 years of governor Northam all over again” isn’t going to do the trick. But…sure, knock yourself out, Senator Chase, let’s see how it goes for ya! LOL 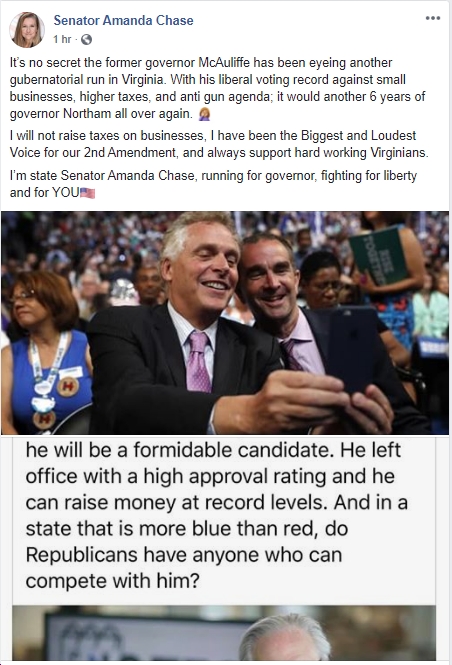