Seriously, how does irresponsible, incendiary rhetoric like this from Bob Good (R) help respond to the COVID-19 pandemic? educate kids? deal with the climate crisis? get the economy moving? provide affordable/quality health care coverage to every American? Answer, it doesn’t.

For the record, self-proclaimed “Biblical Conservative”  Good said: “the left — it would be like being in the fight against Islamic Jihad. It’s perpetual. It will be forever. We will fight against terrorism forever. We’ve got to be vigilant forever.” Good also “called Black Lives Matter a ‘radical’ group and a ‘communist organization’ that calls for the elimination of all law enforcement,” and falsely “accused Webb of siding with the group and wanting to defund the police, though Webb has previously said he is not in favor of defunding the police but rather investing more in mental health and social services professionals who are better trained to respond to some of the calls police handle.”

Bottom line: If you are a VA05 voter, make sure you vote, and no matter what, make sure you DO NOT vote for Bob Good, but for Dr. Cameron Webb – just endorsed by the Daily Progress, which wrote that Good “trends almost as far right as his party can go — on women’s rights, LGBQT rights, immigration and other issues.” 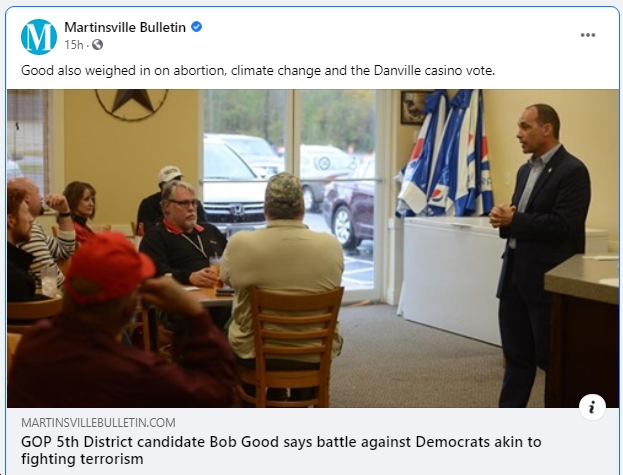