I’m not sure any of us would have predicted, if asked about it a year ago or whatever, that Rep. Denver Riggleman (R-VA05) – one of the most conservative Republicans in Congress, who for over three years largely embraced Trump and spewed his own conspiracy theories – would morph into a hero following the November 3 presidential election. Yet here we are, with Riggleman’s powerful farewell address, his calls to respect the election results, his denunciation of the “manic fringes” of his own party, etc. Whatever the reasons for this turnaround, it’s comforting to see, and stands in stark relief to the cowardice and complicity by Riggleman’s Republican colleagues, including Rep. Rob Wittman (R-VA01), Rep. Ben Cline (R-VA06), Rep. Morgan Griffith (R-VA09), etc.

The latest example was last night on CNN with Anderson Cooper, where Rep. Riggleman said that the Texas lawsuit was “based on disinformation,” compared the Trump legal team’s pathetic won/lost record to “the Washington Generals getting beat by the Harlem Globetrotters,” and predicted an “explosion of activity” not a “diminution” by Trump supporters – who Riggleman says have “lost their footing and their moorings based on the disinformation that’s been poured into them” – following the Supreme Court ruling. Asked what will happen after the Electora College meets on Monday and affirms Joe Biden’s victory, Riggleman said he thinks most Republicans will still not acknowledge reality, because they’re worried about getting reelected in 2022 and 2024, and because part of a “grift” that’s raking in a shit-ton of money.

Sad to say, but Riggleman’s almost certainly correct in all of this. As for the reality-based majority of the country, we all need to stay vigilant, fight for our democracy and our values, and make sure that nobody ever forgets what Trump and his enablers have done.

GOP Week in Review: One Month Until the GOP Convention; How Bad Can This Get? 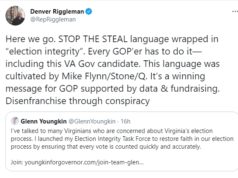