In Virginia, Health Care is On the Ballot

Richmond, VA — On the 11th anniversary of the Affordable Care Act becoming law, millions of Virginians are benefiting from its provisions while Republicans are still clinging to their unpopular and destructive opposition to the ACA.

Thanks to the ACA, insurance companies can’t discriminate against people with pre-existing conditions and charge them more for health care — protecting the health of millions of Virginians with such conditions. The Affordable Care Act also allows states to expand Medicaid, a promise Democrats in Virginia fulfilled in 2018 which has led to over 533,000 low-income Virginians getting access to affordable health care. Seniors in Virginia have also seen lower premiums and deductibles, savings on prescription drugs, and expanded access to mental health and addiction treatment services thanks to the ACA.

Meanwhile, Virginia Republicans have opposed the Affordable Care Act at every turn — making clear that they support dismantling critical protections for people with pre-existing conditions, stripping Medicaid coverage from millions of Americans, raising premiums and preventative care costs for Medicare beneficiaries, and removing young adults from coverage through their parents’ plans. If the Republican candidates for governor had their way, 642,000 Virginians would lose coverage and 3.6 million people with preexisting conditions could face higher premiums or be denied coverage entirely.

Kirk Cox has long opposed the Affordable Care Act — and he supported Donald Trump’s efforts to repeal the law when it was under siege from Washington Republicans.

Amanda Chase has fought against Medicaid expansion in Virginia and has made clear that this extreme position is a litmus test in the Republican primary. In a testament to Republican values, Chase even voted against thousands of her own constituents gaining access to health care.

Glenn Youngkin has railed against Governor Northam’s efforts to protect the Affordable Care Act and expand access to health care for Virginians, making his opposition to the ACA and its critical protections clear.

“The Affordable Care Act was nothing short of a monumental change in American health care — and its protections and cost saving measures have transformed lives and made people safer and healthier across the country,” said Manuel Bonder, DPVA spokesman. “At the same time, Virginia Republicans have opposed the ACA at every turn and are committed to rolling back years of hard fought progress. This year, with the extreme Republicans running for governor, health care is on the ballot once again in Virginia.” 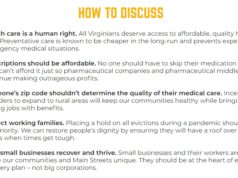