A few minutes ago, the Virginia Board of Elections met to consider a number of agenda items, including the order on the statewide Democratic primary ballots for candidates who turned in their petition signatures at exactly the same time, as well as consideration of granting an extension for several House of Delegates candidates who failed to turn in all their paperwork properly and/or on time. See below for video and some explanation of what went on, but the big news, as Cindy of VAPLAN tweeted, is that an extension was NOT granted for these House of Delegates candidates (Sarah Deitz in HD14, Randall Wolf in HD20, Julie Perry in HD86, Caitlyn Coakley in HD65 [UPDATE 4/1: Coakley’s campaign says that she WILL still be on the ballot, as she doesn’t have a primary, and her due date for applying is 6/8, but she turned it in early], Ibraheem Samirah in HD86 – although we’re told by his campaign that he’ll still be on the ballot, as he mailed everything in before the deadline and has documentation to that effect [UPDATE 4/1: see here for information that Samirah *will* be on the ballot], Michael Jones in HD69, Matt Rogers in HD47, Jordan Gray in HD93) who missed the deadline. As Cindy tweeted:

“SBE voting on whether to grant extension of deadline for candidacy filing. @AgingBobBrink makes motion. There’s no second on motion, so there will be no extension.”

So, it looks like none of those nine candidates will make the ballot, although as Roanoke Times reporter Amy Friedenberger explained:

“Del. Samirah reported to board that he mailed paperwork in time, according to receipts. Board is treating him for now as a candidate, but if his paperwork has problems, his candidacy is tossed out.” 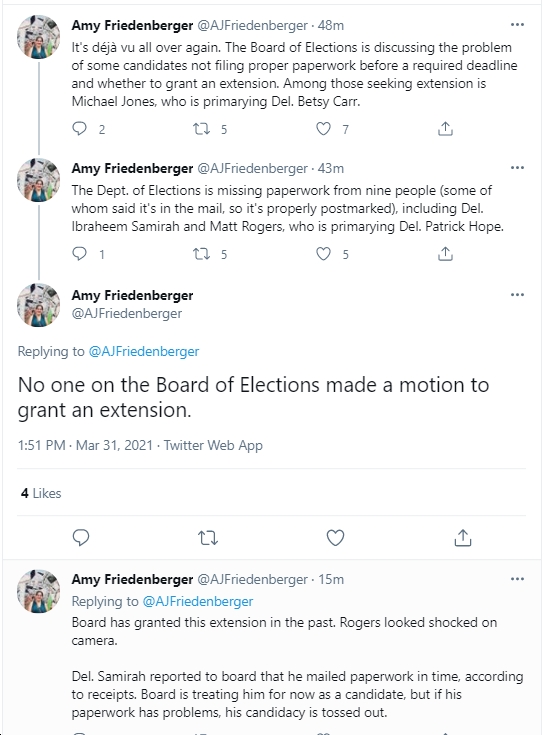 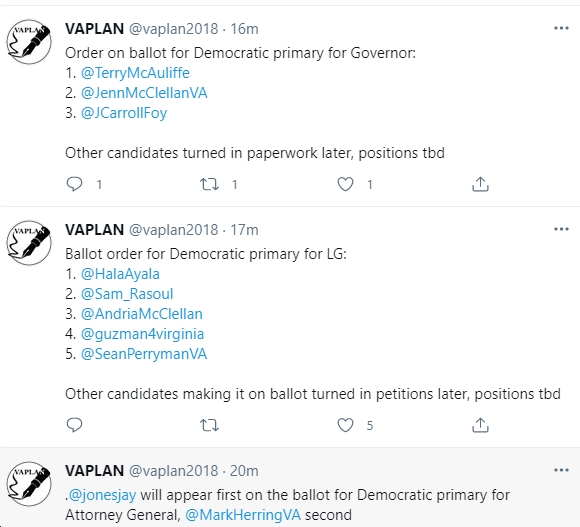