by Cindy and Lowell

After the dumpster fire that is the Virginia GOP finally (?) settled on an unassembled convention for nominating their statewide candidates, Lowell and I realized that while the Democratic Party’s primary was more little-d democratic because it made it possible for every registered voter to participate, the unassembled convention did at least give their voters (the ones able to participate) the opportunity to express their full preferences by relying on rounds of voting similar to ranked choice voting. Which made us wonder, what would this year’s Democratic primaries look like if ranked choice voting were used?

In our enthusiasm, we decided to do some online polling. First challenge: finding a software tool online that was able to get the job done. We wanted it to be easy for users and not make any obstacles to voting (we are Democrats after all) like having to set up an account or visit another website, prevent or at least make some attempt to prevent repeat voting, and we wanted to be able to embed the poll in various platforms. That proved harder than expected, some versions frustrating us so much that we nearly abandoned the project. But we finally settled on rankit.vote, which while not perfect, was at least workable. 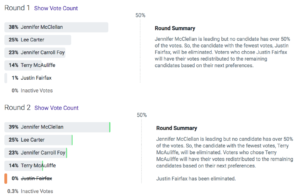 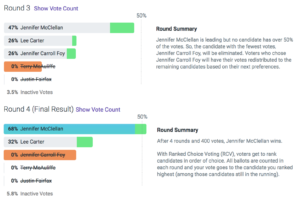 In the Lieutenant Governor poll, the social media maneuvering was even more dramatic. For most of the weekend, Andria McClellan was in the lead, with Sean Perryman in a very close second. But a last minute big bump from Sam Rasoul supporters flipped things around. In the final results, Sam Rasoul started out close to winning a majority of the vote. As candidates below him were eliminated one by one, their votes were mostly distributed evenly among the top vote-getting candidates. Ultimately it took six rounds for Rasoul to reach a majority of the vote. 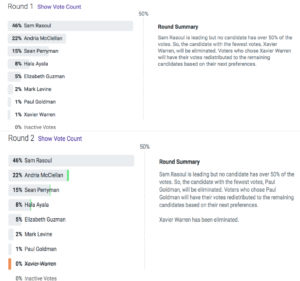 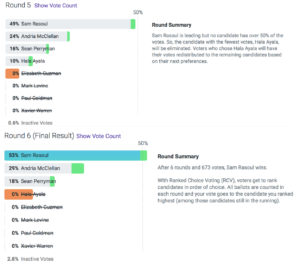 Here are a few other things we learned:

The bottom line is that, while it’s kinda fun to do online polling, there are too many inherent flaws to take it particularly seriously. And, as great as Ranked Choice Voting is, the free software for doing online polls using that method doesn’t really solve the problems, leaving us…basically, waiting for some more scientific, aka real polls of the Virginia 2021 statewide races.