As you probably recall, one of the key endorsements for Glenn Youngkin coming down the home stretch in his run for the VA GOP’s gubernatorial nomination on May 8th was none other than Sen. Ted Cruz (R-TX) – one of the most odious people in America by almost all accounts and any way one looks at it. For his part, Youngkin called the Cruz endorsement “such an honor,” while Cruz showered praise on his BFF Youngkin:

“Glenn is pro-life. He’s a gun owner. He’s a defender of religious liberty,” Cruz said. “If you’ve ever spent time with him, you know that he’s the real deal. A Christian, a family man who has his priorities straight, and a guy with common sense.”

Recall, by the way, that the Republican Accountability Project recently gave an “F/Very Poor” grade, as a result of Cruz:

So that’s who we’re talking about here. By the way, note that just as with Cruz’s endorsement, Youngkin (who perhaps we should just call “Glenn Trumpkin?”) also said it was an “honor” to be endorsed by the even-more-odious-than-Cruz-if-that’s-possible Donald Trump. Which really tells you a great deal about Youngkin, none of it good.

Anyway, back to Cruz and his latest idiocy, offensive bulls***, etc. As Jake Tapper explains, below:

“I wanted to start with Ted Cruz, who as we recall has completely gone all in for Donald Trump, despite Donald Trump publicly attacking his wife, her looks, her mental stability, and publicly accusing his father of being part of the Kennedy assassination. That person, Ted Cruz, suggesting that the U.S. military is ’emasculated’ and ‘pansies.'”

As Nia-Malika Henderson responded, Cruz “is very thirsty for attention,” and at this point has “essentially become a Twitter troll at this point…He in some ways is emasculating himself by lining up behind Donald Trump in the way that he does, after Donald Trump has disparaged his wife and accused his father of somehow being involved in the John F.  Kennedy assassination.”

See below for a bunch more reactions to Cruz’s latest lunacy, as #KremlinCruz trends on Twitter. As you look through them, ask yourself why anyone – Glenn Youngkin in this case – would find it “such an honor” to be endorsed by a person like this, and what it says about Youngkin’s character. Also note that Cruz isn’t just a buffoon and a “Twitter troll,” but a seditionist and extremist in pretty much every way. And yet Glenn Youngkin appears to be tight with him, both personally and politically. So what’s the deal? So far, from everything we’ve seen, Youngkin seems totally simpatico with both Cruz and Trump. Which, of course, should be an automatic disqualifier for being elected governor of Virginia… 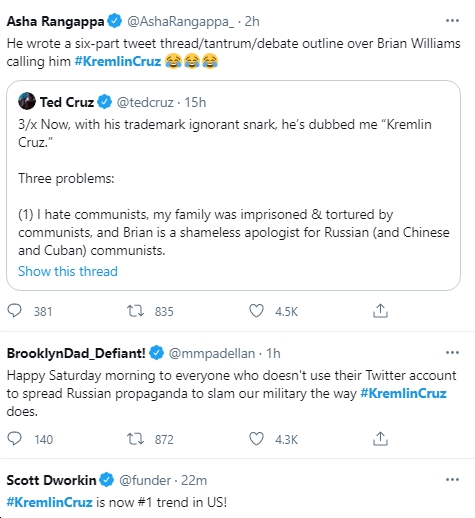 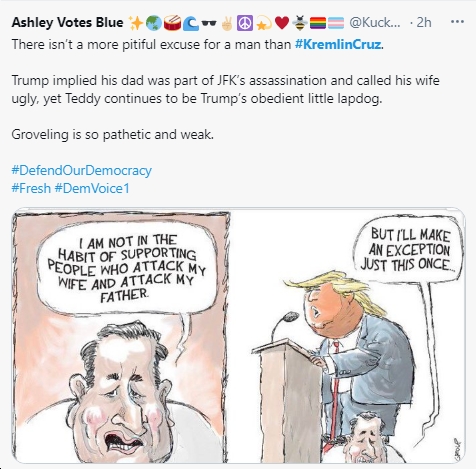 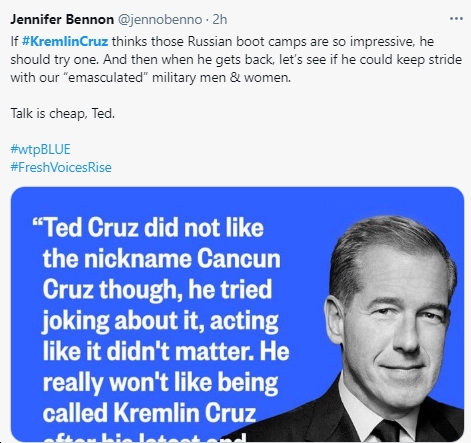 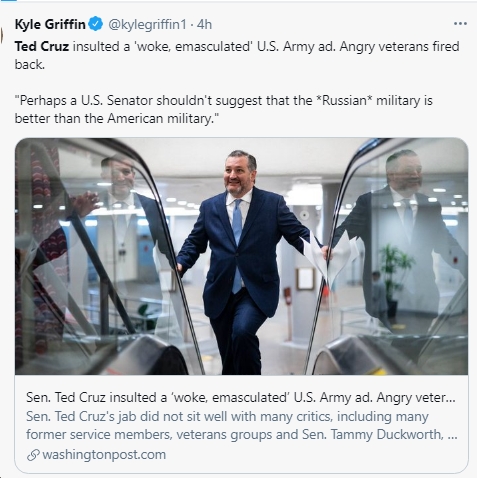 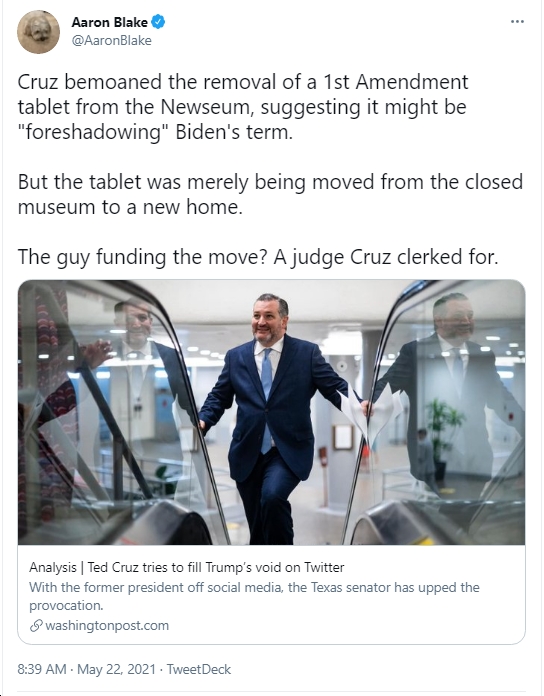 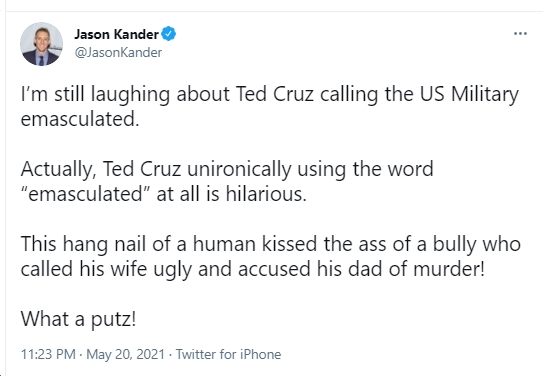 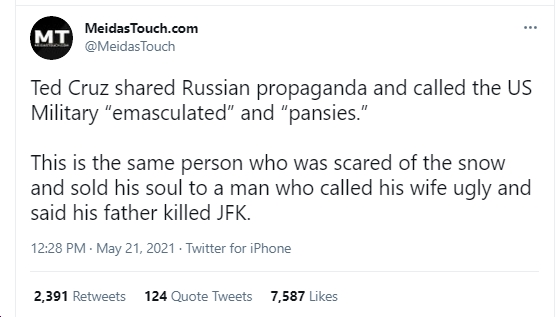 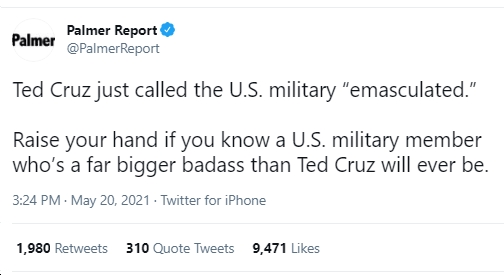 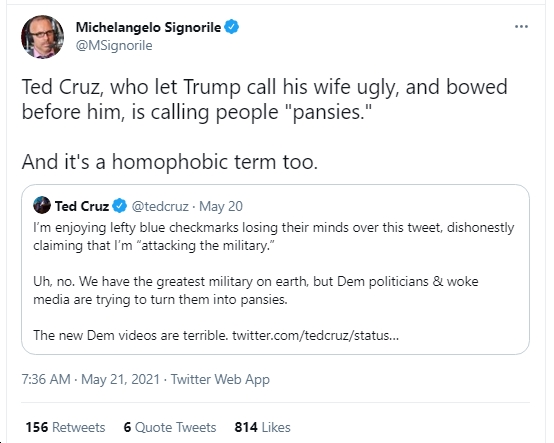 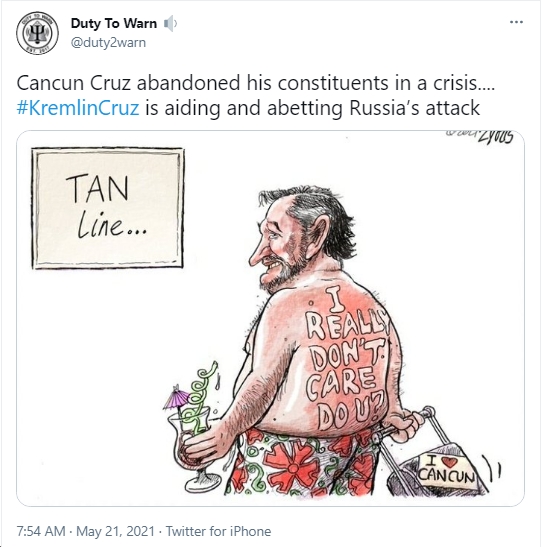