See below for highlights (courtesy of Sierra Club associate attorney Ankit Jain and VAPLAN), as well as video from this morning’s VA Redistricting Commission meeting, which was HIGHLY revealing and somewhat dramatic, actually, with citizen members actually WINNING something for a change over the gerrymanders – mostly Republicans but also Sen. George Barker (D). To date, of course, this commission’s been a fiasco, almost exactly what many of us warned would happen (see The Predictable – and Predicted – VA Redistricting Commission Debacle in Graphics, Bob Holsworth: “Given the composition of the [Redistricting] Commission, the most likely agreement is one where incumbent protection is a primary driver”, Chris Ambrose: VA Redistricting Commission “travesty that was pushed on the voters by a disinformation campaign by OneVirginia2021”, [UPDATED with HIGHLY Revealing “Hot Mic” Moment] “Anyone who doubted that the redistricting amendment was a total partisan sham should have those doubts erased now.”, etc.). This morning, though, the citizen members – mostly Democrats but also, surprisingly, Republican member Mackenzie Babichenko – asserted themselves forcefully, pushed for drawing maps from scratch (and not starting from preexisting, gerrymandered-for-incumbent-protection maps), and actually WON. What a concept, eh?  Anyway, check it out…very interesting! 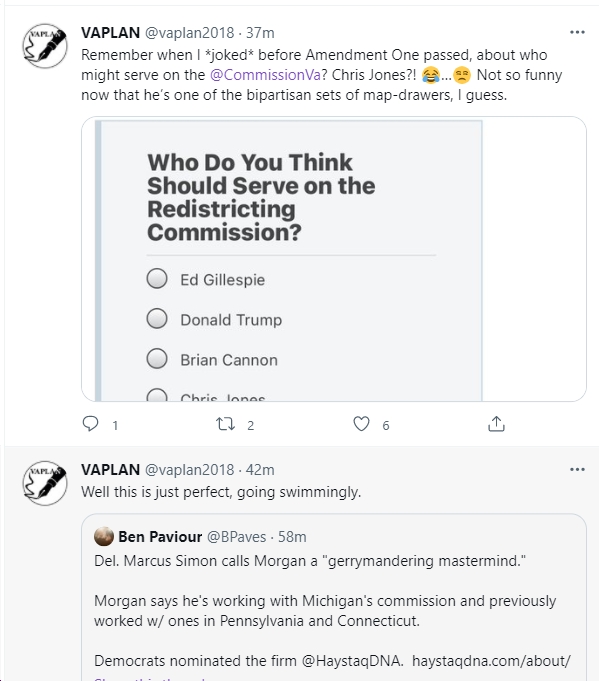 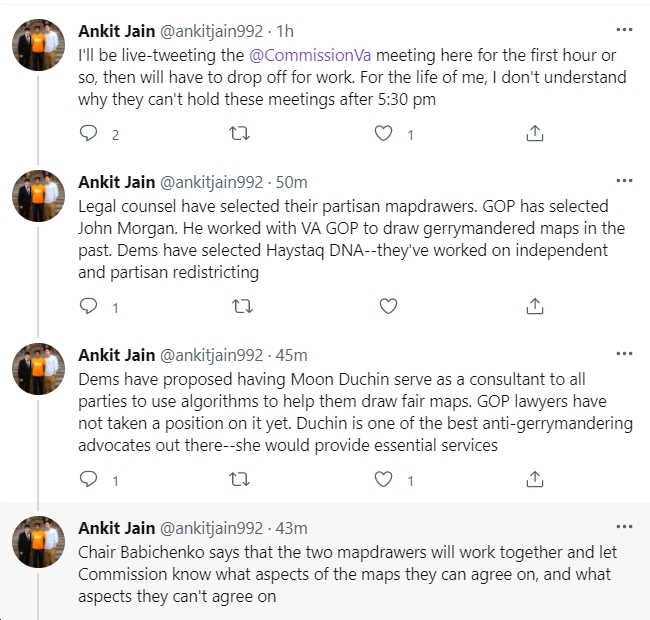 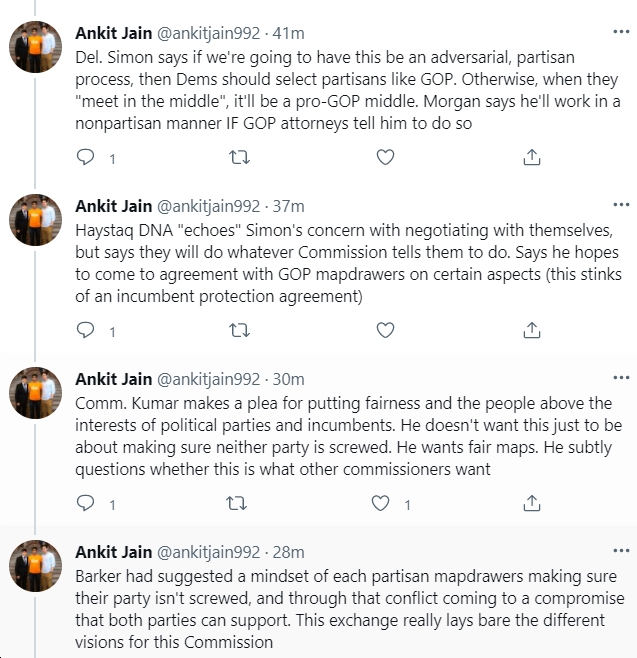 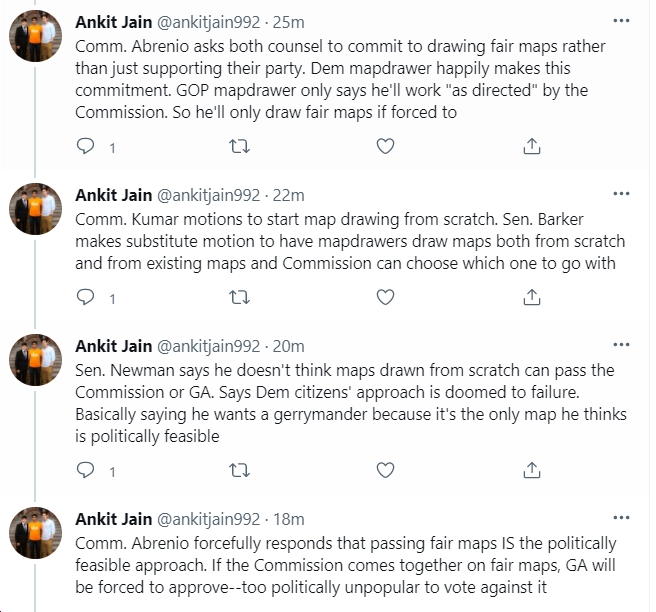 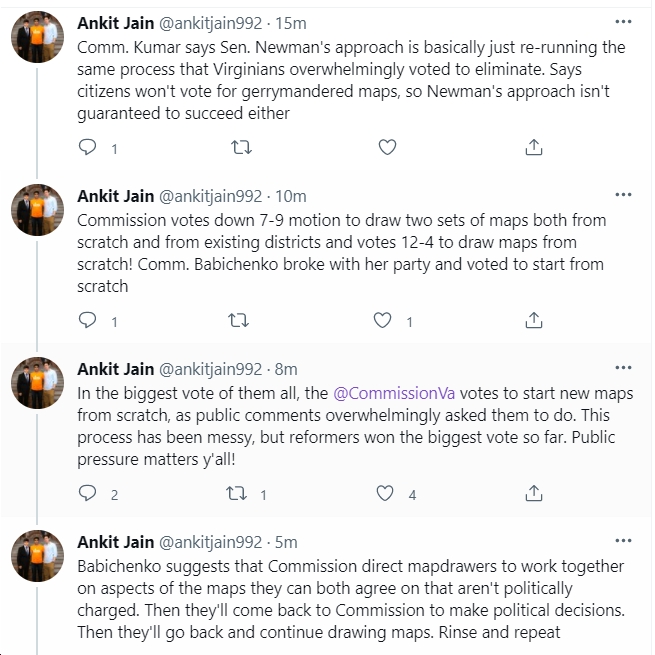 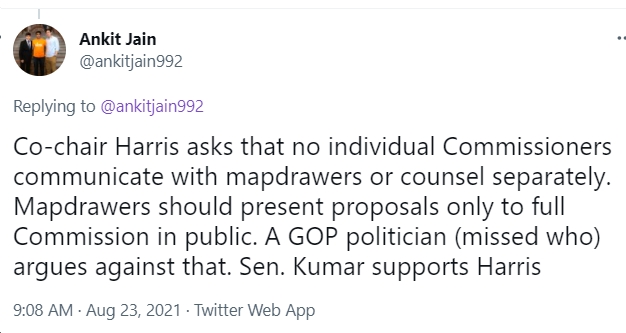 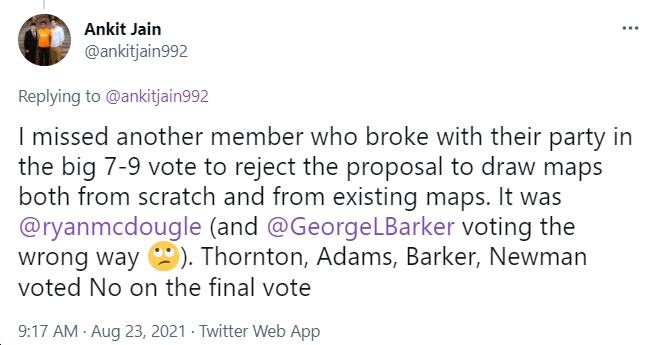 Democratic and Republican map drawers are introduced. On the Republican side, it’s John Morgan, who among other things worked for far-right Delegate-now-Representative Morgan Griffith and for Republican former VA Del. Chris Jones, plus “GOPAC,”  “the premier training organization for Republican candidates in elected office on the state and local levels,” whose mission is “educating and electing a new generation of Republican leaders.” As reporter Ben Paviour tweets, “Del. Marcus Simon calls Morgan a ‘gerrymandering mastermind.’ Morgan says he’s working with Michigan’s commission and previously worked w/ ones in Pennsylvania and Connecticut. Democrats nominated the firm @HaystaqDNA.” (P.S. Note, by the way, that Republican “gerrymandering mastermind” John Morgan totally dodged Democratic citizen commissioner James Abrenio’s excellent question, that the map drawers will commit to be as objective as they can be and to work for the commission, not the parties. In stark contrast, the Democratic map drawer said it was pleased to make that commitment. Highly revealing, eh?)

Also, as Del. Simon pointed out (thanks to Ankit Jain for summarizing this very well!): “Del. Simon says if we’re going to have this be an adversarial, partisan process, then Dems should select partisans like GOP. Otherwise, when they ‘meet in the middle’, it’ll be a pro-GOP middle.” Jain adds, 100% correctly: “Haystaq DNA ‘echoes’ Simon’s concern with negotiating with themselves, but says they will do whatever Commission tells them to do. Says he hopes to come to agreement with GOP mapdrawers on certain aspects (this stinks of an incumbent protection agreement).” Great job by the Democratic citizen members of the commission this morning, pushing back against the gerrymanderers (mostly the Republicans, but also Sen. Barker, as noted previously). As Ankit Jain summarizes very well: