We’ve waited for months for Trump Republican Glenn Youngkin to reveal his policy plans for Virginia if – god forbid – he were to be elected governor. Of course, if you paid any attention to the VA GOP(Q)’s nomination contest last winter/spring, you’d already know that Youngkin:

So with that background in mind, this morning we’re starting to get some details on Youngkin’s economic policy plans (see the Washington Post story here and reporter Brandon Jarvis’ tweets, below). Not surprisingly, they’re basically all about…wait for it…yep, tax cuts and deregulation (aka, letting companies that pollute, abuse workers, etc. get away with it), because to supply-side/”trickle-down” Republicans, there is literally no problem – possibly including hangnails and gout – that can’t be cured by tax cuts and deregulation, preferably for the wealthy and powerful. In short, Youngkin would focus on taking Virginia’s enviable, AAA-bond-rating fiscal position and doing to it what George W. Bush did to America’s budget deficit/debt.

Remember, Youngkin’s top economic advisor Stephen Moore tried this agenda in Kansas, and the result was disastrous – “Instead, the tax cuts failed and revenue collapsed to the point of creating a fiscal crisis so deep even the state’s Republican legislature voted to cancel out the tax cuts.” Now, why on earth would anyone in their right mind want to do to Virginia what Youngkin’s top economic advisor did to Kansas? Exactly – they wouldn’t. So this fall, make sure you vote Democratic up and down the ballot, so that in 2022, people won’t be asking (to paraphrase the title “What’s the Matter with Kansas?“), “What’s the Matter with Virginia?” 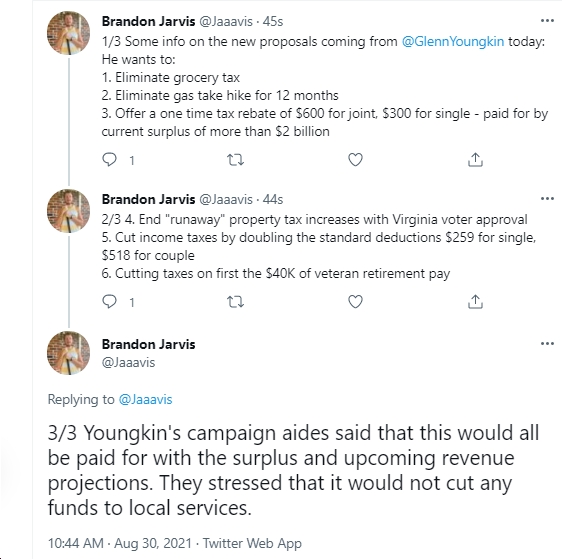