UPDATE 9:19 pm – Two pieces of good news, from Ben Tribbett: “Delegate Dan Helmer HD40 will be re-elected” and “Delegate Karrie Delaney HD67 will be re-elected.” As Chaz Nuttycombe points out, “Control of the House of Delegates is still up in the air. A Dem House / R statewide sweep is possible. Likelihood is hard to determine as we are running into a brickwall of results when looking at the races”

UPDATE 8:47 pm – This is good news, at least (from Ben Tribbett): “8:45 P.M. PROJECTION- Michelle Maldonado HD50 will be elected as a new Democratic member”

UPDATE 8:35 pm – Hard to argue with Ryan Matsumoto on this: “There’s no way to spin this for Democrats – this is a very very bad result for them. Virginia has swung 10-15 points to the right since last November. That type of swing would be devastating for them in the House and Senate in 2022.” And if that happens, kiss our democracy goodbye.

UPDATE 8:30 pm – Also from Greg Sargent, along the lines of what I keep repeating ad nauseum: “Whoever wins today, Dems will have to reckon with this: They are facing a lopsided communications imbalance, one that enabled Youngkin and his allies to employ a massive propaganda apparatus to pump right wing sewage at the GOP base for months.”

UPDATE 8:29 pm – Greg Sargent of the WaPo tweets, “Hard to accept, but Youngkin’s approach of rolling up huge margins in the red counties with a carefully targeted subterranean communications strategy, combined with running on a cheerfully packaged center right platform to shave down suburban margins, appears to be working.” Except there was nothing “center right” about Youngkin’s platform; it was hard right all the way if you actually spent a few minutes and looked at what Youngkin stands for. The next four years are going to suck in Virginia. Worse than that is what all this says about America. Nothing good whatsoever.

UPDATE 8:27 pm – Just a formality at this point, but Dave Wasserman called the governor’s race for Youngkin. What a disaster.

UPDATE 8:19 pm – Ben Tribbett has called the governor’s race for Glenn Youngkin and the LG race for Winsome Sears. Just a complete fiasco at this point. Bottom line – This is what happens when Dems cede huge swaths of the media and the narrative to Rs. Some of us (raises hand!) have been warning about this for years, but of course we weren’t listened to. Because…no good reason whatsoever, just arrogance, idiocy, etc. Also, some of us (raises hand) warned Dems repeatedly that you can’t let Rs get a running start, head of steam, etc. with their lies, that you need to AGGRESSIVELY fight back. But…again, nothing. Infuriating.

UPDATE 8:17 pm – According to G. Elliott Morris, “The model is stabilizing around Youngkin +3 with 32% of the vote in. Things are close enough and there are enough votes left in Fairfax where McAuliffe could win, but the model sees a pretty likely (70%) R win in Virginia tonight. And a swing to Rs of at least 10 pts either way.” And Nate Cohn says, “Update at over 1300 precincts: Youngkin continues to be on track, running ahead of what he needs–even if only modestly–by just about any measure. He’s a very big favorite at this point; needle might be getting into that 90% range if it was on the internet.”

UPDATE 8:14 pm – According to Brent Peabody, “Virginia is at 42% reporting. But in several Democratic strongholds, that number’s a lot lower. Charlottesville: 9% Alexandria: 15% Arlington: 19 Richmond: 0% (!) This race is going to tighten, too soon right now to call.”

UPDATE 8:08 pm – According to Dave Wasserman, “Youngkin is rolling up huge margins in rural VA, making a lot of headway in outer suburbs and doing better than I’d have expected among in-person early voters. He’s in the driver’s seat right now.”

UPDATE 7:59 pm – According to Nate Cohn of the NY Times, “Now at 888 precincts: picture unchanged. Youngkin still ever so slightly running ahead of his targets, including nearly everywhere in the state. If the needle was on the internet, it would be pointing his way”

UPDATE 7:57 pm – According to Ben Tribbett, “7:55 P.M. PROJECTION- Dave LaRock HD33 will be re-elected.” Note that this is a “red” district and the only way Dems would have won this one is if they were having a “blue wave” kinda night. But that’s not going to be the case tonight.

UPDATE 7:39 pm – Per Nate Cohn of the NY Times, “350 precincts counted, and Youngkin is still running slightly ahead of our projections for a tie And he’s doing it in nearly every category we’re breaking down. The good news for Democrats: most of the vote reporting so far is election day, rural. So they’ll gain from here. Still opportunities to run ahead from here. That said, the needle would be tilting to the right if it were on the internet.”

UPDATE 7:37 pm – Per Dave Wasserman, “Breaking in Loudoun Co.: 71k votes reported and McAuliffe wins the batch 55%-45%. @vpapupdates is reporting those are *Election Day* votes, not EV/VBM. If that’s true, it would be a good result for McAuliffe”

UPDATE 7:16 pm – In Chesterfield County, a “purple” county  (almost a tie in 2017 between Ralph Northam and Ed Gillespie) which was “red” for years but has been shifting politically, Glenn Youngkin and Terry McAuliffe are basically tied, with 22 or 81 precincts reporting. Also, Hala Ayala and Winsome Sears, Mark Herring and Jason Miyares basically tied.

UPDATE 7:13 pm – Dave Wasserman tweets, “We’re expecting to get Fairfax absentee/early vote numbers quickly after 7pm tonight (unlike in the past). If Youngkin gets over 30% of that vote, that’d be a great sign for him (but I’d still expect it to be sub-30%).”

As always, I’ll be live blogging Virginia’s election results as they come in tonight, with results from the State Board of Elections, VPAP, etc.

Finally, here are a few numbers to keep in mind as results start coming in tonight:

1) Statewide turnout in 2017 was 2,612,309, and in 2020 was 4,486,821. So far, we’ve seen nearly 1.2 million early votes cast in this election, with the potential for turnout to exceed 2017 levels. We’ll see. Also, it will be interesting to see WHERE election day turnout is strong. For instance, if turnout is heavy in “Trumpy” areas in SW Virginia, etc., that’s not a good sign for Democrats.  Also, Democrats need strong election day turnout in deep-blue areas in the Richmond area, Hampton Roads and NoVA. So…keep an eye on all that.

2) The latest polling heading into election day can be seen here: McAuliffe having led narrowly in most recent, high-quality polls, except for a Fox “News” poll, which swung dramatically from its previous poll a couple weeks earlier (from a 5-point “likely voter” lead for McAuliffe to a big “likely voter” lead for Youngkin…for no apparent reason).

Also, check out this “model of the vote” by Dave Wasserman of the Cook Political Report – very helpful. 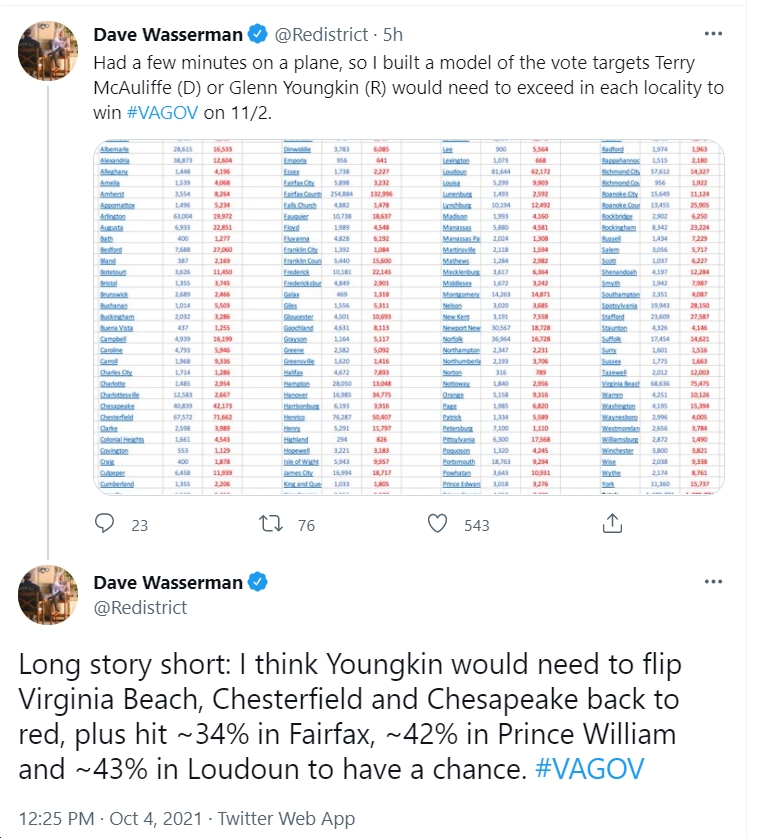 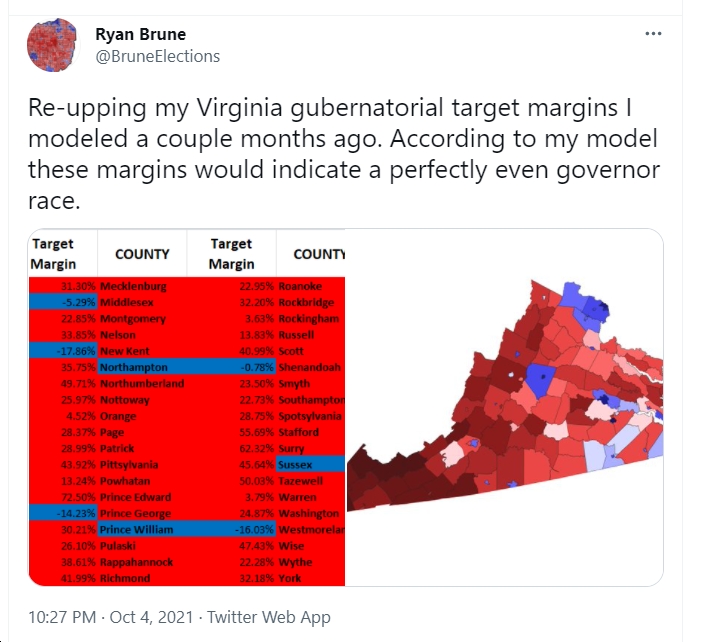 Finally, check this out by Sam Shirazi, who has done excellent work the past couple weeks keeping close track of the early voting numbers here in Virginia, and explaining what they all might mean…

2. Do African-Americans vote more on Election Day as compared to their early vote turnout?

3. Do Trumpy voters in SW show up or does Youngkin focus on suburbs not bring them out? https://t.co/GZ57P6sSzz