There have been numerous reasons cited by critics and opponents for ousting Del. Eileen Filler-Corn as Virginia House Democratic Leader, although really what it comes down to is a hodgepodge of stuff, which Democratic operative Thomas Bowman of Pod Virginia recently referred to as a “coalition of the unhappy,” also mentioning “newer people who are distracted by the next shiny object or they really don’t understand the gravity of the situation or the significance of that vote.” On that same show, reporter Michael Pope listed “people that maybe saw themselves as not in the ‘in crowd’ or progressive people that wanted to challenge the ‘establishment'”; “inciting events piling up over a long period of time”; “the election loss”; the “gas tax proposal”; etc.

Another oft-cited reason one hears from critics of Filler-Corn is perhaps the most exasperating, as it takes one of Filler-Corn’s overwhelming *strengths* – fundraising – and turns it against her, by claiming that she ended 2021 with *too much money* in her coffers, and supposedly not enough spent on key, competitive races. For the record, Del. Filler-Corn over the years has donated *millions of dollars* to Virginia House Democratic candidates (see here and here). That includes $1.45 million from her PAC, Energized for Change, to party committees in 2021; $1.36 million from Energized for Change to individual House Democratic candidates in 2021; etc. Also note that this morning, VPAP took a look at the claim that House Democratic leadership supposedly hadn’t invested enough resources into key House of Delegates races last year, and found the following:

“A leadership fight among House Democrats partially turns on a hypothetical question: Could the party have avoided losing its majority last fall if leadership had drained its coffers and invested more in key races? This visual shows that resources were not an issue for the seven incumbent Democrats who lost their seats. All seven had a commanding money advantage over their GOP challengers.”

So was money the deciding issue in these races? I mean…sure, if the Democratic incumbents had outspent their Republican opponents by even more lopsided margins, it’s *possible* that they could have gotten a few more votes, but at some point, it’s really getting into “diminishing marginal returns” territory, ya know? Also, let’s face it, the governor’s race – with nearly $140 MILLION spent! –  was what dominated last year, with VERY few voters splitting their tickets these days. So it’s VERY unlikely that if, let’s just say, Nancy Guy’s campaign had outspent her Republican opponent 2.9 to 1 instead of 2.4 to 1, Guy could have won another 733 votes. It also seems unlikely, given the dynamics of the 2021 election cycle, what motivated voters to show up at the polls (or not), etc. Finally, again, Eileen Filler-Corn donated a ton of money ($2.85 million in 2020-2021 from her PAC, plus another $1.4 million from her delegate campaign account), so to blame her for somehow losing the House Democratic majority for not giving even MORE money seems just a tad bit unfair. OK, yeah, more than a tad bit unfair! LOL 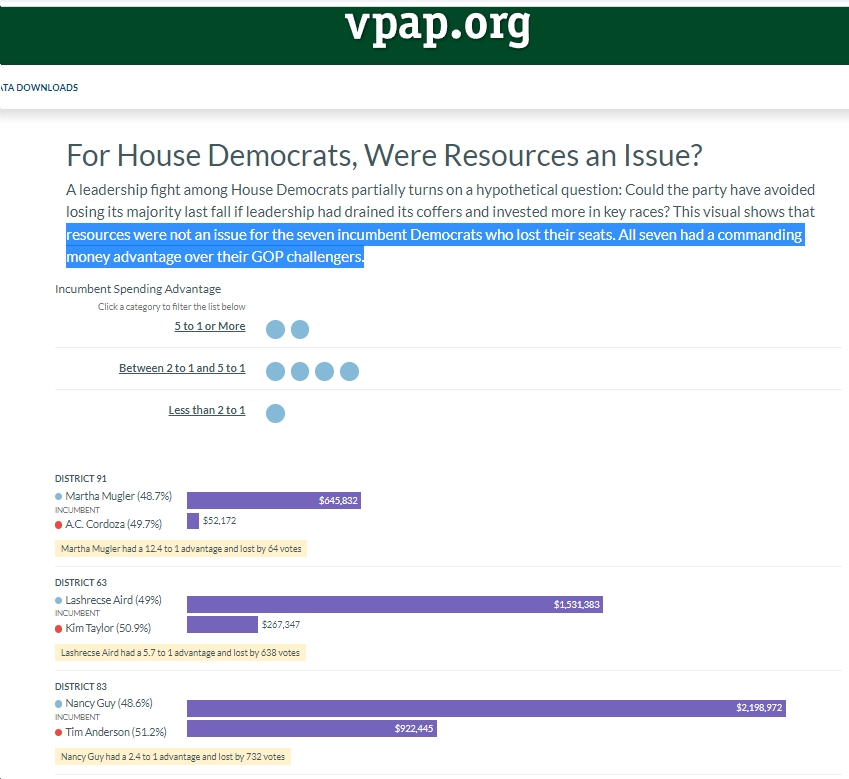 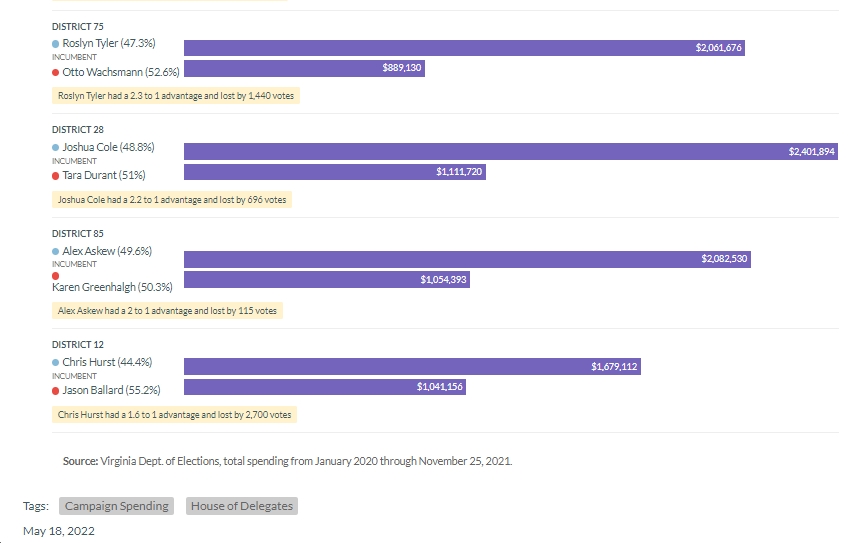