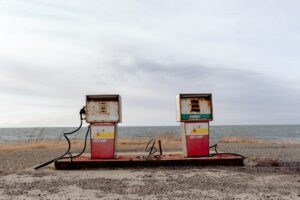 Nobody likes paying more for gasoline and high fuel costs can indeed trigger a cascade of problems throughout the economy. That said, much of what constitutes the dialogue in the media and social media over gas prices is as phony as a three-dollar bill.

And this matters quite a bit because we are being manipulated into a midterm election in which voters have been endlessly coached to say “I’m voting against Joe Biden and the Democrats because of high gas prices and inflation.” Which makes no damn sense and would lead a majority of voters to vote against their values and interests on a raft of issues from abortion to the environment to wages and health care.

I see too many Dems collapsing into a defeatist crouch and not fighting back, as if they think there’s no hope of beating back these “arguments.” So my goal here is to show how insubstantial these positions are and how easy it is to poke huge holes in them. Let me, then, point out four of the myths being floated about this issue – and deflate them.

I am by no means an economist, but here’s something I learned in Econ 101: it’s misleading to compare the prices of goods and services across multiple years without adjusting those prices for inflation. When your grandpa talks about the days of getting a cup of coffee for a nickel and a burger for a dime, it just doesn’t make sense to compare those costs to today’s, completely out of context.

So all those screaming headlines about “record high gas prices”? They are fundamentally misleading, because if you actually adjust prices for inflation, as you should, we are still below the highs of 2008 – when a certain Republican was in the White House. As I write this, the current gas price is $4.82, while the July 2008 record equaled $5.37 in today’s dollars.

If inflation is the whole point of the story, is it too much to ask reporters and editors to incorporate the impact of inflation on the very prices they’re discussing? A lot of people have been admonished by fact checkers for lesser examples of not telling the whole truth. So please correct media outlets howling about records that have not been broken – if they would only chose to report the facts less sensationally and more accurately.

So far, that’s not happening. As discussed below, the high prices are due to the confluence of supply and demand, and demand is a reflection of consumers so far being willing and able to pay these prices. As a matter of fact, U.S. drivers in the first three months of 2022 set an all-time record for miles travelled.

So many in the media have focused so much on doom and gloom inflation stories that they have downplayed the many incredibly bright spots in the economy right now, which President Biden ticked off in a recent op-ed in the Wall Street Journal:

It is true that economic decisions are partly driven by psychology, so if those with the biggest megaphones keep talking down the economy, people and companies may pull back, stop spending and investing, etc. But that would be a fine example of a self-inflicted wound.

Myth #3: The president needs to do something!

I haven’t seen a single media outlet point out the fundamental hypocrisy and contradictory nature of the party that claims to be committed to “the free market” endlessly demanding that the president and Congress fix the price of a commodity. Rarely are the Republican politicians whining about gas prices even asked what they would do differently. It’s just assumed that voters will vote based on the situation, with too few in the press or politics bothering to explain cause and effect or offer realistic solutions to the problem.

No respectable journalistic outlet should discuss this issue without focusing their coverage on answering two fundamental questions:

Oil is a commodity, for which prices go up when demand for the product exceeds supply. Demand for oil is skyrocketing as people, desperate to put COVID lockdowns behind them, hit the roads, returning to work, restaurants, shows and long delayed vacations.

Meanwhile, as in other industries (like semiconductors), production that shut down because of COVID is not ramping up as quickly as we would like, causing supply shortages. And yes, Russia’s invasion of Ukraine is severely aggravating the problem as Putin is rightly sanctioned for his brutal, genocidal war and we thereby lose access to 10% of the world’s oil supply.

And that’s pretty much it – supply and demand. While I’m sympathetic to the charges of oil companies engaged in price gouging, the sad truth is, that’s how capitalism works: companies charge the highest price that consumers are willing and able to pay. Unless Congress can pass a law regulating such practices, then, well, good luck shaming oil executives into not maximizing their profits as their shareholders demand.

As some in the media have admitted when pressed, there is very little that the president can do about the price of gasoline – which is at the mercy of a global market to which the U.S. contributes only 4% of supply. The releases from the Strategic Petroleum Reserve make for a good show but are too small compared to the overall market to provide anything beyond temporary price relief – at best.

Myth #4: The solution is to drill for more oil!

Of course, the one familiar “solution” that Republicans have to offer – as usual – is “Drill, baby, drill!” Yet more drilling would have little if any impact on current prices – first, because it takes so long to go through the whole process of setting up drilling operations, finding refiners, marketing the oil, etc. – a process slowed down by post-pandemic shortages. Second, as mentioned above, the US is too small of a player in the global marketplace to be more than the proverbial drop in the bucket.

Charges that the Biden administration are holding up domestic oil production are patently false. As the administration has pointed out, if the industry wants to drill more on federal land, it has over 9,000 permits to use that haven’t been tapped yet. And controversial pipeline projects like Keystone XL, even if suddenly approved, would have a laughably tiny impact on the global market.

Pumping more oil also would mean continuing to shirk our responsibilities to head off catastrophic increases in the climate change that already has precipitated the worst drought in the US Southwest in 1200 years. In other words, it would require denying reality and selling out our childrens’ and granchildrens’ futures for the sake of a cheaper drive to the beach.

No, the actual mid-term and long-term solution to this problem involves tackling the dilemma that even oilman George W. Bush once admitted: “America is addicted to oil.” To state the obvious, the less gasoline we use, the less we have to worry about how much it costs.

There are many good policies to promote electric vehicle purchases in order to free us from the ravages of both high oil prices and the climate crisis. Biden’s stalled Build Back Better legislation includes a number of such provisions, including tax credits for both new and used EVs. We also need to greatly expand our network of charging stations, a challenge to which Biden’s Infrastructure Law has at least made a down payment.

The truth is that Americans have long been spoiled by artificially low gas prices and encouraged to squander this precious resource as much as humanly possible. Pretty much anytime I travel to a parking lot anywhere, I see people sitting in their car with the engine idling. If gas is as unaffordable as we’re being told, why do people at all income levels continue to just put it up in smoke like it’s cheap and inexhaustible? You wouldn’t do that with caviar or fine champagne, would you?

We must not allow such a critical election as the 2022 midterms to be decided based on a phony debate over gas prices. Call out those who spread such misinformation, set the record straight, take the conversation back to ultimately more consequential issues – like saving our democracy, saving young women from being imprisoned for having abortions, saving us all from the climate emergency and saving our children from more gun violence – and please fight for the Democrats to retain control of Congress so that we can focus on finding solutions to such problems rather than just allowing ourselves to be demagogued by politicians with no workable solutions at all.