Despite some “journalists” trying to argue, laughably, that Glenn Youngkin is some sort of “sane” “moderate” Republican, not Trumpist at all, blah blah blah, Youngkin’s actions keep telling us that in fact he’s a right winger through and through. Just look at the appointments he’s made to his administration – Elizabeth Schultz, Andrew Wheeler,  Dr. Marty Makary, Colin Greene, Casey Flores, etc.

The latest, as the WaPo reports:

Gov. Glenn Youngkin (R) has appointed a historian to the state Board of Historic Resources who has defended the state’s Confederate monuments and condemned their destruction as a “dangerous” rewriting of history.

Ann Hunter McLean of Richmond, the former head of a Christian school, told an online publication that she believes Virginia’s heritage is “under attack” as she begins serving on the board, which oversees state historic-site designations.

… “People want to destroy the evidence of that story,” she continued, saying the Civil War was fought for the “sovereignty of each state and constitutional law.”

So first of all, that’s all completely nuts, particularly her bizarre argument that the Confederacy fought FOR “constitutional law,” when in fact they fighting to destroy the nation so that they could maintain their system of slavery indefinitely. So that’s bad enough, and should have been disqualifying for an administration appointment, let alone to the Board of Historic Resources!  But nope, that’s just what Youngkin wants. As former Del. Jay Jones tweeted yesterday:

@GlennYoungkin continues his open embrace of white supremacy and I hope no one is surprised. He tells on himself daily.

@delegatebagby is spot on: “He must believe that no one is paying attention to his appointments or he’s just that brazen to repeatedly thumb his nose at us.”

Also, see below for some audio of Youngkin’s appointment, Anna Mclean, on far-right radio a few weeks ago, at which time she had the following to say: 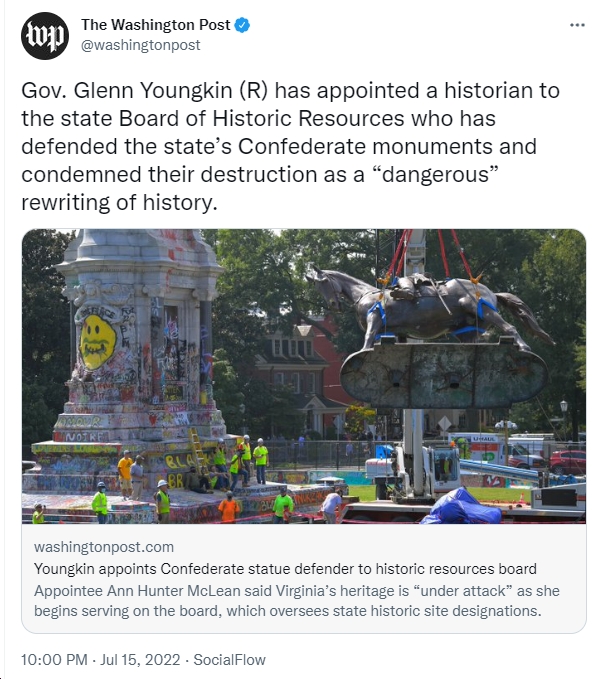 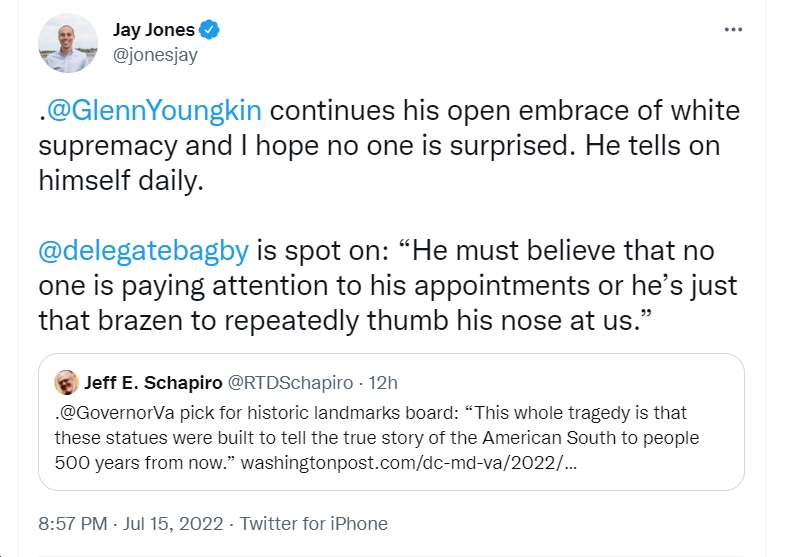