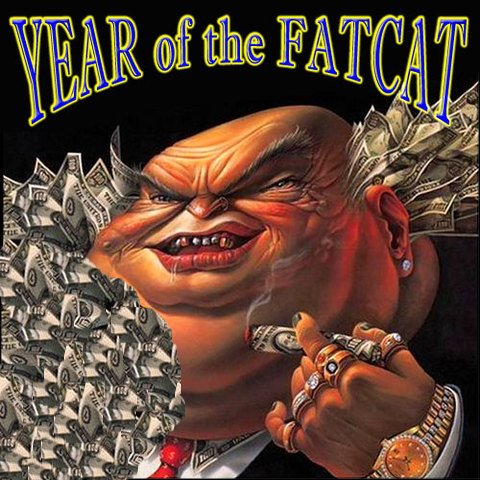 John Boehner hasn't been calling his debt ceiling bill by the right name. He should have been calling it the GOP Poverty for More Americans Act. According to the non-partisan Center on Budget and Policy  Priorities, "Boehner's new budget proposal would essentially require...a choice between deep cuts in the years immediately ahead in Social Security and Medicare benefits for current retirees, repeal of health reform's coverage expansions, or wholesale evisceration of basic assistance programs for vulnerable Americans."

The GOP Poverty Enlargement Plan has absolutely no revenue increases in it. Instead, it relies on cutting programs, including entitlement programs like Social Security, Medicaid and Medicare. Boehner told Rush Limbaugh that Republicans appointed to a special committee will find the $1.8 trillion in savings and won't support tax increases. He told his own caucus that $1.8 trillion comes from "entitlement programs."

According to Robert Greenstein of the CBPP, to get that much in entitlement savings over the next ten years would require one of three things: 1) cut Social Security and Medicare benefits heavily for current retirees; 2) repeal the Affordable Care Act's coverage expansions while keeping its measures cutting Medicare payments; or 3) essentially destroy the safety net for low-income children, parents, senior citizens, and people with disabilities.  Greenstein, an expert on the federal budget, says there is no other plausible way to get $1.5-1.8 trillion in entitlement cuts over the decade.

The misnamed "Cut, Cap, and Balance" joke that was passed by the House recently showed for all to see that tea-poisoned Republicans think the only way to do what they want is to make sure that 35-50 million Americans stay uninsured for health care, throw as many people as possible off Medicaid, cut Social Security pensions, and in essence declare war on the "least among us." This is class warfare with disregard for the poor that would make Marie Antoinette blush.

All of this is the Teapublican plan to protect the wealthiest among us and their welfare system, a system paid for by the rest of us who don't live on capital gains, have private jets, or make millions by gaming the tax code.

How High Are the Stakes? The common-sense-challenged Republicans blocking any resolution to the debt ceiling debacle evidently do not have the ability to see the ramifications of not raising the debt ceiling. At the same time, whether fair or not, Standard & Poors is threatening to downgrade the U.S. credit rating for future bond sales. The credit rating agency evidently wants to see something along the lines of President Obama's $4 trillion debt reduction and revenue increase package as evidence of the seriousness of the nation in attacking future indebtedness.

Now, making comparisons between individual household budgets and the budget of a sovereign nation with a fiat currency - money issued solely on the full faith and credit of the nation - are not really realistic. However, such a comparison can occasionally clarify rather arcane matters. So, here goes.

If I find myself deeply in debt (over-leveraged) and have seen at the same time a steep drop in my income, I can pretty well be assured that my credit rating will decline and any additional money I borrow in the future will cost me lots more in interest. Plus, I just may find myself unable to get all the borrowed money I need to tide me over until my income gets back to normal. So, I could do several things. The best choices would be to cut my expenses in ways that are least harmful to me and get a second job in order to increase income.

House Speaker John Boehner claimed last night if President Obama simply signed the House legislation he has introduced, which would raise the debt ceiling in two stages, the "crisis" atmosphere over the nation's credit rating would simply disappear.

However, CNN reports that Boehner's debt plan would actually not meet the threshold of ratings agencies to avoid a downgrade of the naton's debt while Sen. Harry Reid's debt plan would would preserve the country's AAA credit rating.

If the Boehner plan wouldn't stop a downgrade of America's credit & the hit to our economy that goes along with it, while Reid's would preserve America's pristine AAA credit rating, why is WashingtonPost.com calling them "similar plans"? The Beltway media might as well wave the white flag on covering the Tea Party-manufactured debt ceiling crisis. Just post the competing press releases with a note that says, "We give up. You try to figure out what's true."

TheGreenMiles - July 23, 2011 1
Granted, this isn't a scientific poll, but: Holy crap. Have any two politicians in history bungled an issue worse than John Boehner & Eric Cantor? Freshmen House Republicans like Scott Rigell have to know standing behind these guys is political suicide, don't they? 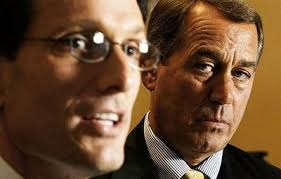 Republicans, being fairly simple creatures, aren't all that difficult to predict.  Often you just have to look at the history of their forebears to figure out where they're going.

So if you want to know what's up with Eric Cantor and what to expect next with him, just read up on the path to power taken by Newt Gingrich.  Newt, back in the eighties, was the aggressive young back-bencher willing to stab his leaders in the back in the name of ideological purity - and, more importantly, in the name of stealing their office space.  (Et tu, Newt?)

Poor Bob Michel, then House Majority Leader, and President George H.W. ("Read my...uh, never mind.") Bush, felt the force of Newt on a rampage, and paid the price for being between him and power.  Newt had already been on the rise, particularly with his successful act of forcing Democratic Speaker Jim Wright from office.  When Bush reneged on his pledge not to raise taxes - in order to, y'know, reduce that deficit that Republicans claim to care so much about - Newt saw his opportunity and pounced, going after Bush with a vengeance, thereby contributing to Bush's loss to Clinton in 1992.

Alas, you can't make an omelet without breaking a few eggs, and so Macbeth - I mean, Newt - continued his march by rallying GOP troops triumphantly behind his Contract on America, with his crushing victory in the Congressional elections of 1994.  All good for him, until, like an uglier version of Napoleon, he pushed his luck too far, shut down the government, and got his sorry butt run out of town.

Is any of this starting to sound familiar?

In a never-ending drumbeat, GOP politicians continually tell us how we have to pare down the federal government, how we need to leave state and local governmental functions to those levels of government. In fact, John Boehner gave a speech in which he said GOPers would demand further massive deficit reduction in return for their support in raising the federal debt ceiling. Boehner must mean that everyone else should sacrifice, while he gets to keep his pet money spending sprees.

In one recent example of Boehner's blatant hypocrisy, he made sure that one of his favorites, a voucher plan to give millions in federal money to private and parochial schools in Washington D.C., was part of the budget deal, even though many government studies have shown that the voucher program is ineffective. D.C. Rep. Eleanor Holmes Norton pointed out that education is a state and local function, but that "District residents are being treated as colonists by the Congress of United States."

Seven of the eight GOP representatives from Virginia, the same ones who decry "big government" and "federal intrusion into state matters," voted for Boehner's voucher scheme. The only one who didn't was Morgan Griffith of the 9th. Since Boehner knew his pork barrel for D.C. parochial schools wouldn't pass the Senate, he finagled to have it included in the final 2011 budget deal he cut with President Obama and Sen. Harry Reid.

That agreement disappointed D.C. Mayor Vincent Gray. "Why should we have foisted upon us a voucher program? Those are decisions that should be made by the people in this city." He is absolutely right. However much Boehner and his hypocritical GOP henchmen scream about their "fiscal conservatism" and "states' rights," it never extends to their own pet projects and ideas.

Stop me if this sounds familiar: The usual mid-term pendulum swing & a first-term Democratic president with tepid approval ratings combine to sweep a wave of Republicans into Congress. The new Republicans convince themselves they have a mandate & attempt draconian budget cuts that lead to a government shutdown.

With Tea Party Republicans demanding massive cuts in everything from job training to clean energy to health care (while leaving billions in subsidies intact for their Big Oil donors), Ezra Klein today says 2011's Republicans may be on the same ruinous path as 1995's "revolutionaries":

Boehner and his team came in determined to avoid the mistakes that Newt Gingrich made. They were going to be humble, they wouldn't overread their mandate, they wouldn't go for draconian cuts in services that weren't defensible once they had to be explained. They lost. They're going to need to propose three times as many cuts now. And this comes alongside a new Pew poll (pdf) showing that the only category of federal spending that a majority of Republicans support cutting is foreign aid. On everything from Social Security to education to crime prevention to scientific research, more spending is preferred.

This loss, much more than the failed votes on the extension of the PATRIOT Act or funds for the United Nations (both of which were brought to the floor under a rule requiring a 2/3rd majority for passage) shows that the House GOP leadership has little sway and less control over the rank-and-file. The Republican Study Committee seems more powerful than the Republican leadership at this point. The budget proposal produced by Rep. Jim Jordan won out over the one favored by Rep. Paul Ryan. If I were a betting man, I'd say the odds of a government shutdown -- either over cuts or the debt ceiling -- just went up dramatically.

Despite an initial pledge to focus on jobs, House Republicans have done literally nothing, instead launching an ideological war. Republicans haven't learned from history - and it's looking more & more like they're committed to repeating it. Will we be talking about Barack Obama as the New Comeback Kid as he rides discontent with the Republican overreach to victory in 2012?

This Is What a Dem Candidate Should Run On

This is the way a Democratic candidate should frame his - or her - campaign against the Republicans who have been obstructionists and naysayers ever since the election of President Obama. (See Lowell's Tim Kaine reference earlier.)

Justin Coussoule is the very courageous candidate willing to take on Ohio's "tanned wunderkind" and mega-golf enthusiast, John Boehner (R-8TH). (Boehner played golf a total of 119 times in the past 12 months. Hard to read proposed legislation in all that glare, huh? So, Boehner just says, "No.")


Republicans have responded by saying "Hell No, You Can't" and blasting this as a direct result of the recently signed health care reform (HCR) legislation.
12Page 1 of 2