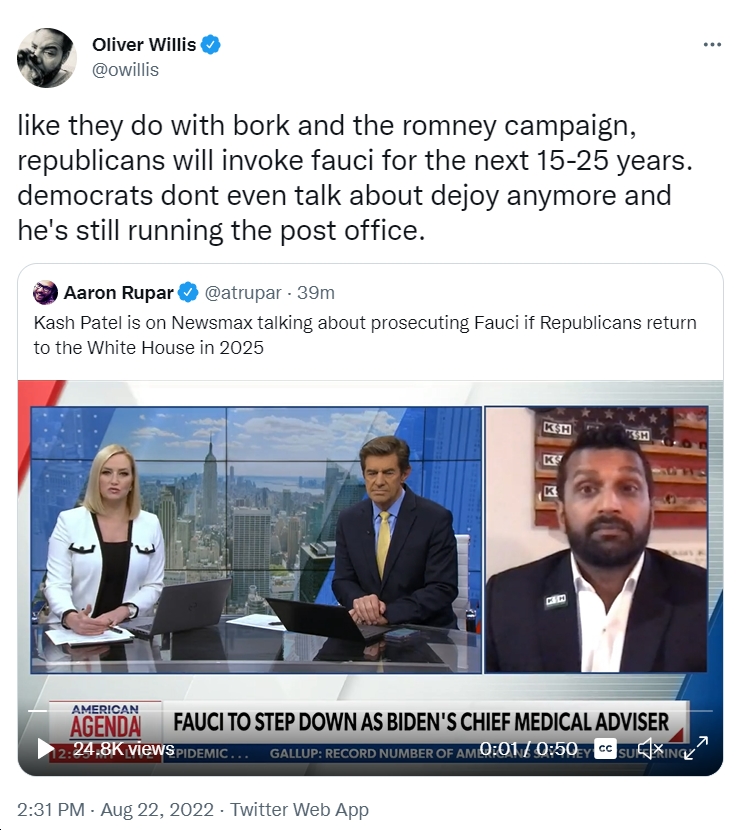 This is a great point by Oliver Willis – that Republicans “will invoke Fauci for the next 15-25 years,” while Democrats seem to have the attention span of drunken gnats, barely even (if at all!) mentioning the most appalling Republican behavior even months later, let alone years or decades later.

Compare and contrast to Republicans, who – more than 50 years after the Democratic and Republican parties massively transformed (following the conservative white backlash over passage of the Civil Rights Act and Voting Rights Act in 1964-1965), with Democrats shedding their old, “Southern Democrat”/”Dixiecrat” wing – almost all of whom became Republicans – and Republicans over a couple decades losing essentially all their once-plentiful moderate and even progressive Republicans (Lowell Weicker, Jacob Javits, John Chaffee, Charles Mathias, Charles Percy, Arlen Specter, Jim Jeffords, etc, etc.). Yet today, you’ll STILL hear Republicans constantly bring up the fact that the Democratic Party used to be (many, MANY years ago!) the party of racist “Dixiecrats,” while their own party is still – in their minds, not at all in reality – the “party of Lincoln” (which it hasn’t been since…what, the 1950s?). It would be as if Democrats were constantly talking about FDR, the New Deal, the Great Society, etc, and bashing Republicans for Calvin Coolidge or Richard Nixon or Barry Goldwater or whatever. But Democrats don’t do that, while Republicans – seemingly with the looong memory span of their mascot, the elephant – most definitely DO! Hell, Republicans are more likely to bring up Jimmy Carter or George McGovern than we are to bring up Ronald Reagan or Richard Nixon. It’s bizarre.

Anyway, Oliver Willis’ tweet got me to thinking about which Virginia Republican politicians of the past would be the types of people you’d think Democrats might want to bring up now and again (or frequently!) in order to demonstrate how corrupt, extreme, incompetent, etc. Virginia Republicans are and have been for many years.  As you check out this illustrative list, keep in mind that Virginia Republicans will probably never let anyone forget that Ralph Northam had “blackface” photos on his yearbook page nearly 40 years ago – in fact, it often seems to be Virginia Republicans main response on social media! – while Democrats rarely if ever mention the following:

Anyway, this could go on and on – “Sideshow Bob” Marshall? Extremist Dick Black? Ed Gillespie’s disgraceful 2017 campaign? Jim Gilmore’s disastrous governorship, during which he drove Virginia’s finances into a ditch? – but you get the idea. The question, again, is why don’t Democrats keep this stuff alive in people’s memories? Why is that only Republicans seem to do that – and mostly dishonestly! – about Democrats, while Democrats move on the second someone’s out of office, as if they’d never existed, instead of using that material for many years to come? Part of it is that right wingers have a media network/echo chamber to push this stuff, and part of it is that it’s just the way right wingers think. But still…as Oliver Willis astutely points out, Democrats are committing political malpractice by leaving this material on the table and not using it. That really needs to change.