While Gov. Bob McDonnell (R-VA) is vetoing bills to promote solar power, Massachusetts is showing Virginians what could've been had the state chosen to embrace clean energy.

A new Center for American Progress report details how the Bay State's clean energy policies have the industry booming, with 64,000 people now working in clean energy jobs in Massachusetts and growing at an annual rate of 7 percent. That's compared to just 16,907 in Virginia, according to the most recent data I could find in a 2009 Pew report. But even that relatively low number of clean energy jobs dwarfs the number of coal mining jobs in Virginia - just 5,164 in 2011. Across Appalachia, just 59,059 people work in coal mining - and that represents a 14-year high.

Even with a slightly improved 2011 job assessment, "Virginia's job losses in 2011 were in construction, manufacturing and the information sector" - some of the same industries that would benefit from the move to clean energy. Imagine if Virginia had set strong, mandatory clean energy & energy efficiency standards at the same time Massachusetts did. How many of these stories would we be hearing from across Virginia?

The problem is the state's largest utility, Dominion Virginia Power. While states like Minnesota and Iowa get 10 to 20 percent of their electricity from wind power alone, creating thousands of jobs, Dominion generates zero electricity for Virginia ratepayers from wind or solar.

Instead, the utility invests overwhelmingly in dirty fossil fuels. Despite rising global warming concerns and smog-filled summer skies in Shenandoah National Park, Dominion plans to increase the renewable-energy slice of its cumulative energy pie by a microscopic 0.4 percent over the next 15 years. You read that right: 0.4 percent.

There's no sign things will change without some loud and much-deserved booing from the crowd. Which is why ratepayers from across the state have set Saturday as "The March to End Dominion's Power Madness."

The rally will be Saturday (March 24) at noon outside Dominion's Richmond headquarters, sign up at EndPowerMadness.com.

Dominion Continues its Gassy Rampage with another Natural Gas Plant in...

Dominion VA Power's most recent brilliant idea for turning Virginia into an energy independent Mecca that the world over can envy comes in the form of a $1.1 billion natural gas-fired power plant  in Southside Virginia.

If approved by Virginia's "regulators," that natural gas ship would start sailing (and polluting) in 2016.

While natural gas is a better energy alternative than the coal-fired power plants  at Dominion's Chesapeake Energy Center in Chesapeake and Yorktown Power Station that Dominion publicly announced it would close by 2016, natural gas is still a significant greenhouse gas threat and it's unclear how long natural gas can fill Virginia's energy needs in any meaningful way.

True energy independence is of course achieved through the use of solar and wind technology  to harness the Earth's natural sources of energy. So if Dominion VA Power is serious about energy independence, where are the $1.1 billion investments in these two energy sources?

Public Outreach Under Way While McDonnell Moves to His Own Toxic... 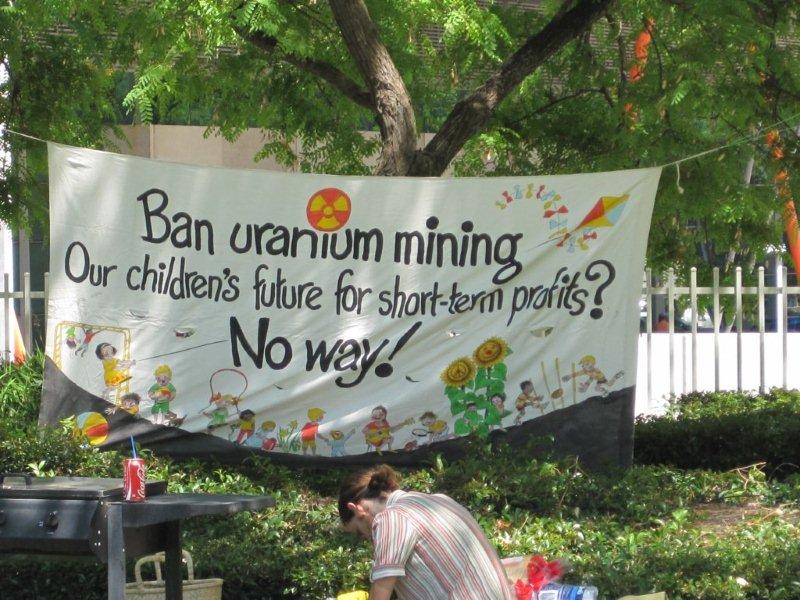 The National Academy of Sciences (NAS) recently launched its five month public outreach effort in Danville, VA to "brief" the VA public on its recently released report on uranium mining, as required under the NAS agreement with Virginia Tech. As most of us know, however, Gov. McDonnell shrugged off this breathing period to take the numerous studies into consideration when he penned an executive order directing the creation of legal and administrative regulations for the milling and mining of uranium. So much for stakeholder education and input.

As the NAS report concluded that no technology currently exists that is capable of eradicating every risk and uncertainty involved with uranium mining, waste storage and processing, Gov. McDonnell must be assuming that the benefits outweigh the risks or that the risks are so minimal as to be of no consequence. If so, what is Gov. McDonnell basing his conclusions off of? The usual pseudo-science that the VA GOP has become adept at pulling out of thin air?

For a political party that lauds its ideological roots in Jeffersonian democracy and all that it implies, Republicans like McDonnell appear to have an ambiguous attitude towards the judgment of the people of Virginia. When were Southside Virginians asked if they wanted uranium mining and milling in their backyards? When was the public outcry in Virginia over uranium mining formally taken into account by the McDonnell administration? Why is the framework to mine and mill uranium being constructed well in advance of public input over the NAS report on uranium mining? The public, it seems, doesn't know what is good for themselves but luckily for Virginians, McDonnell and his administration does. A must-read piece today from Grist's David Roberts on why clean energy is a huge political winner:

It's an empty threat. The fact is, overwhelming majorities of Americans - across party, age, and regional lines - support clean, modern energy. A poll conducted by ORC International in November found that 77 percent of Americans, including 65 percent of Republicans, believe that "the U.S. needs to be a clean energy technology leader and it should invest in the research and domestic manufacturing of wind, solar, and energy efficiency technologies." Last February, a Gallup poll offered a list of actions Congress might take. The most popular option, with an incredible 83 percent support, was "an energy bill that provides incentives for using solar and other alternative energy resources." [...]

Clean energy isolates the Republican base from the broad mass of American opinion and, in particular, from swing-state independents. It's a wedge issue and an electoral winner for Democrats if they can quit playing defense and go on the attack. The appropriate response to threats from the U.S. Chamber of Commerce is a well-administered ass kicking.

Next time you hear a Democrat waffling on support for clean energy, kick them in the shins. I am not making this up: Some focus group testing this week showed clean energy is almost as popular with swing voters as killing Osama bin Laden (although who gives killing the mastermind of 9/11 a B minus?). Plus, we all know how much voters love candidates apologizing for what they believe in.

Dominion’s Energy Tyranny: Where’s the Outrage from the Tea Party &... 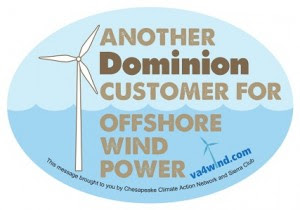 Virginia's 2007 energy re-regulation bill was a terrible idea from the start. It was essentially written by Dominion Virginia Power and rubber-stamped into law by the Virginia General Assembly & Gov. Tim Kaine, who showed no interest in challenging one of Virginia's top sources of money in politics.

Yes, the Dominion family owns some wind farms, one just across the state line in West Virginia. But we aren't getting a single electron of that energy, because Dominion sells it to other states that have much tougher standards for what counts as renewable energy. For us in Virginia, Dominion buys cheap certificates that no one else wants.

That's a great deal for Dominion. According to the Southern Environmental Law Center, $1.7 million could buy enough of these certificates to satisfy Dominion's 2010 RPS targets, qualifying the company to collect an extra $76 million over two years from its ratepayers.

Worse yet, Dominion is aggressively using its monopoly power to target any small businesses who try to sell clean energy to customers in Virginia:

On a windy but otherwise nice Wednesday afternoon, the VA Sierra Club, in conjunction with the Chesapeake Climate Action Network (CCAN) and volunteers, met at the front of Dominion VA Power's headquarters in Richmond to protest its efforts to kill clean energy in VA.

After stipulating its reasons for protesting in front of Dominion's Richmond headquarters, the groups marched to the VA State Corporation Commission to deliver over 2,500 signed petitions that made clear the demand for clean energy in Virginia.

But for Virginians who want clean energy to make a considerable dent in VA energy landscape, the road to that goal won't be an easy one. Dominion has made it clear through its actions that it is willing to spend more money promoting its green intentions (i.e. marketing) than actually implementing clean sources of energy that Virginian's can use.

Dominion VA Power is not above the economic laws of supply and demand. The supply of clean energy technologies is readily available as well as the demand for these technologies in VA. If Dominion does not get on board with the demands of Virginians, Dominion will not only lose the good-faith of its customers (even more than it already has), it will eventually lose out on the opportunity to take advantage of the "green wave" that will soon overtake America's "energy portfolio." It's a story we're hearing more and more often - the military is increasingly turning to renewable energy solutions because they simply work better than dirty energy sources. Testing is underway on the latest innovation at Virginia's Fort Story:

The Navy's Explosive Ordnance Disposal Training and Evaluation Unit 2 in Virginia has been testing five prototype lightweight field power kits that include solar cells as a key component. The kits replace fifty pounds of equipment with a compact system that weighs only about nine pounds.

The idea is just one of several developed thanks to suggestions given to the Office of Naval Research's TechSolutions program:

Though the concept is basically the same as an old fashioned employee suggestion box, a single request can have a profound effect on operations. In one recent example, TechSolutions has been testing high efficiency LED bunk lights in response to a sailor's complaint about noisy, outdated fluorescent fixtures. Aside from improving readiness and health the new lighting system has already yielded significant savings in energy, maintenance, storage and disposal logistics, and it may soon go fleetwide. From our good friends at the Chesapeake Climate Action Network:

RICHMOND - Nearly two hundred notable leaders and grassroots activists from across Virginia gathered in Richmond Saturday to promote new jobs and clean energy at the commonwealth's first citizens' conference on offshore wind power-Energize Virginia. Political leaders and environmentalists sat next to investment partners with Google Inc. to make the case for offshore wind energy, ending with a colorful march to the steps of the State Capitol.

"In a stalled economy, few industries have the potential to bring more jobs to the commonwealth than the renewable offshore wind industry," said Terry McAuliffe, clean energy advocate and Chairman of GreenTech Automotive Corp. "Offshore wind relies on American ingenuity and innovation to provide the clean, domestically-produced energy we need, while offering an opportunity to provide thousands of quality jobs for Virginians."