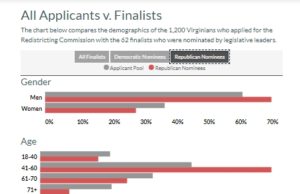 Just 29% of GOP-Selected Finalists for VA Redistricting Commission Are Women...

lowkell - January 3, 2021 0
Yesterday, we got the names of the finalists for the citizen members of the Virginia Redistricting Commission. Now, courtesy of VPAP, we've got some... 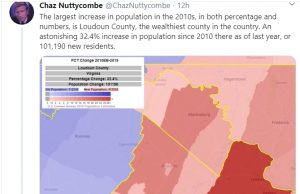 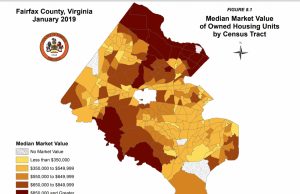 lowkell - February 2, 2020 3
There's lots of interesting information in the just-released 2019 Fairfax County demographics report.  See below for some highlights, including: Fairfax County's population of 1,167,000... 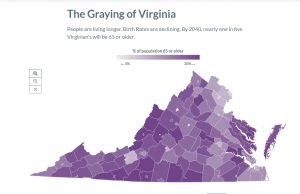 Virginia Population Projections Show That by 2030, the “Reddest” Areas Will...

lowkell - August 19, 2019 4
See below for an interesting infographic, courtesy of VPAP, showing how old Virginia cities and counties are going to be in 2030 - just...

Twelve Days of Christmas for Virginia Democrats: Day Eleven, It Gets...

On the eleventh day of Christmas, the Commonwealth of Virginia gave to me ...

A blueing electorate, increasingly racially diverse. While Virginia is growing fast enough to pick up an extra Congressional seat in 2020, it's also becoming less white. Projections from the Weldon Cooper Center at the University of Virginia show increasing shares of Hispanics and Asian-Americans across the Commonwealth through 2040.

It will take time, but there's an upside to this demographic trend. With each year, Virginia will become a little bit more diverse, some districts faster than others. Day by day, the younger, more diverse population will turn of age and join the ranks of the potential electorate.

FreeDem - January 1, 2014 0
(Welcome to this twelve part series looking at the challenges, obstacles, and future possibilities of Virginia Democrats. If you've missed past diaries, follow these links: Day One, Competitive Districts. Day Two, Turnout Problems. Day Three, Past Mistakes. Day Four, Downstate Democrats. Day Five, Unchallenged Incumbents. Day Six, Present Opportunities. And as always, at the end of the diary there is a poll! Thank you for reading, and have a happy 2014!)

On the seventh day of Christmas, the Commonwealth of Virginia gave to me ...

Encouraging signs of growing Democratic trends in the state's largest counties and most competitive districts!

Take a look at the vote trend between 2001 and 2013 from Daily Kos. There's a lot of red there, but it's in the most rural, slow-growth parts of the state. All of the major population areas, from Northern Virginia to Richmond to Tidewater, are trending blue. The population growth in the state is heavily concentrated in this urban crescent. Favorable demographic trends and the alienation of moderate suburban voters by the hard-right have combined to turn Virginia into a blue state ... at least statewide in higher turnout elections.

Yeah, but what about in the General Assembly?