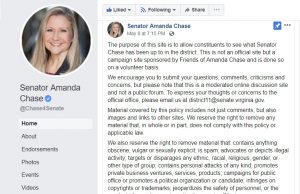 lowkell - May 16, 2019 0
Virginia State Sen. Amanda “I Call My Revolver My Little Equal Rights Amendment” Chase (R-) is at it again. Fresh off of grossly exaggerating...

A Siegel - October 15, 2018 1
by A Siegel As a native Washingtonian (okay, native of the area), one is almost weaned on protest as background noise.  Moving around "monumental" and...

Blue Virginia - November 27, 2017 2
By Kafkalives  It’s happening. The systemic takeover and removal of our beloved first amendment is happening with a ferocious speed, aided in no small part by...

Progress Among Democrats in Virginia

The Move To Amend constituency in NOVA played a key role advocating resolutions protesting the Citizens United ruling at the recent 8th and 11th District Democratic conventions. Now we wait for the state convention this Saturday to determine if the grassroots has gained a toehold in the DPVA.

It would be only a toehold because any resolution presented at the convention will fall short of calling for the constitutional amendment the nonpartisan Move To Amend (MTA) advocates but which members of the State Central Committee and others fear as too radical an objective. There are distinguished opponents of the MTA outside the Party who are aligned with the position of officials like Frank Leone who oppose a constitutional amendment and believe that this injustice can be ameliorated with less extreme measures. It is that kind of entrenched opposition within the DPVA which makes the weaker resolution the only option that could see the light of day this Saturday.

A resolution protesting the ruling is weak medicine compared to full out support for a constitutional guarantee against corporate abuse of free speech, but it is a step in the right direction for gaining momentum in Virginia. The Virginia MTA supporters are currently courting elected officials in local NOVA jurisdictions with the goal of passing resolutions at the city/county level.

Mr. Leone, who is not alone objecting to a constitutional amendment, has reportedly stated that, as an attorney, he cannot possibly espouse an opinion that "would mess with" the rights granted by the First Amendment to the Constitution. While this is not a completely unreasonable objection, it does harken back to past efforts to water down or stonewall any initiative within the DPVA which might end up as a resolution passed at a state convention. This is the kind of conflict between what might be personal agenda and the will of the grassroots that has been the bane of Democratic activism.

The DPVA is historically reticent about advocating anything that might look like a plank much less a platform. There are office holders and legislative assistants (who make a living on incumbency) who prefer the candidates be allowed the freedom to wander off the Democratic ranch in order to preserve their seats. That kind of rudderless and unanchored raft did much to influence the rapidly declining prospects in 2009 and 2011. The opportunity for this resolution to be acted upon at the convention Saturday is a step, albeit small, in the right direction.

Yes, a mere two years after thieves with obvious ulterior motives hacked hundreds of thousands of emails from the University of East Anglia, police in the UK and US are now investigating the crime.

It's about freaking time. The climate scientists allegedly implicated by these emails have been cleared by no less than 9 investigations finding no wrongdoing whatsoever on their part. Of course, it is possible that the investigators, ranging from the UK House of Commons to the US Department of Commerce Inspector General to Penn State U. to East Anglia to the National Science Foundation, are all part of the vast conspiracy. But...I kinda doubt it.

It makes a lot more sense to investigate the hackers in this case, who had the capability and resources to break into the University's system, target and steal emails from specific climate scientists, cull through the full 200,000+ of them to find the ones that could be the most easily twisted and misrepresented to fulfill the agenda of the Fossil Fuel Lobby, and then skillfully release them in two batches, both before major international climate summits, in an obvious attempt to influence global climate policy. And gosh, don't you wonder where they might have gotten those resources? (Hmmm...)

Fans of Superman -- or Seinfeld -- will know about the Bizarro world, where everything is the opposite of here.  As Jerry Seinfeld described the Bizarro Superman's world:

Up is down; down is up. He says 'hello' when he leaves, 'goodbye' when he arrives.

Here in Virginia, we have the Bizarro attorney general -- Ken Cuccinelli.  Just think about it:

- A real AG upholds the law. Our Bizarro AG sues the EPA to prevent it from meeting the Clean Air Act and a Supreme Court ruling requiring the agency to regulate greenhouse gas emissions.

- A real AG defends the powerless. Our Bizarro AG tells state colleges and universities that they are prohibited from anti-discrimination policies against gays -- that, in other words, they are obligated to discriminate.

-  A real AG defends his clients, including the state's universities - and upholds the state and federal Constitutions.  Our Bizarro AG launches a perverse war against the University of Virginia to force a climate scientist to stop doing legitimate research.

-  A real AG challenges powerful interests to ensure that they don't harm the state or its inhabitants.  Our Bizarro AG pockets donations from large industries like Massey Energy and makes no effort to determine if they are committing the same kinds of coal mine safety violations in Virginia of which they have been found guilty in West Virginia.

And now there is the issue of separation of church and state.  Per the WaPo yesterday, our Bizarro Attorney General counseled a group of ministers on how to evade the bans on using their pulpits for political endorsements:

The moment to impeach a public official is when they begin to represent a tangible threat to the very democracy they have been elected to serve.  This moment has come for Virginia Attorney General Ken Cuccinelli.

There are a number of potential grounds upon which to make the case against Cuccinelli, who has spent his first year in office pursuing partisan goose chases rather than performing his job as the chief legal officer for ALL Virginians.  But I will focus on just one issue, the one that, I believe, is so utterly offensive to the American democratic tradition that it demands an equally aggressive rebuke.

And that is his relentless pursuit of Professor Michael Mann and the University of Virginia, in a poisonously misguided effort to turn the threat some vested interests feel at the concept of climate change into an official state criminal investigation of a scientist for his research.  Cooch's decision to appeal to the Virginia Supreme Court the rightful ruling of Judge Paul Peatross, who threw out Cooch's baseless case against Mann, shows that a state official who will not listen to reason needs to be challenged himself.

We are not talking here about politicians having policy differences and hashing them out fairly and squarely in the public arena.  Cuccinelli's witch hunt against Mann escalates our political wars to the unheard-of level of actually criminalizing scientific research that threatens one's donors.  Let's be blunt here: we are talking here about an unprecedented act in American history.

UVA Stands Up To the Bully, Calls Cooch’s Bluff We all know how much damage bullies do in high school.  But how about when the bully is a powerful government official?

That's when the bully's targets need to stand up, challenge him and let the world know that such noxious behavior will not be tolerated - before such government officials start to think that they can get away with bullying us all.  So thank God for the University of Virginia's bold stance in opposition to the Bully of the Commonwealth, Ken Cuccinelli.

On Tuesday, UVA filed the latest brief in its legal challenge to Cuccinelli's "civil investigative demands" (subpoenas, basically) aimed at acclaimed climate scientist (and former UVA professor) Michael Mann.  It is an excellent piece of work, so let's allow it to speak for itself with the following excerpts:

The implications of [Cuccinelli's] position are staggering in their breadth; according to the Attorney General, whenever an academic offers a disagreement with another academic's scientific conclusions, that disagreement opens the debate up to participation from the Attorney General's office in the form of a civil investigative demand.  No discipline - and no professor - falls outside this claimed authority.

The WaPo Keeps the Pressure on Cuccinelli

The Washington Post is keeping its focus on Attorney General Cuccinelli's assault on academic freedom at the University of Virginia, with yesterday's editorial and today's cartoon by the great Tom Toles.

The editorial is about the University of Virginia's moral obligation to push back against the AG's fishing expedition aimed at harassing climate scientist Michael Mann:

VIRGINIA ATTORNEY General Ken Cuccinelli II has decided to misuse state funds in his personal war against climate science. But that doesn't mean anyone else should cooperate.

would deal grave harm to scientific inquiry throughout Virginia's public higher education system. Science progresses when researchers can propose ideas freely, differ in their methods and argue about the interpretations of their results. The commonwealth should nurture that process, not make scientists fear that they will be subject to investigation if a politician dislikes their conclusions.

And, the Post concludes, "Gov. Robert F. McDonnell should join the dozens of others -- including some of Mr. Mann's harshest critics -- in condemning Mr. Cuccinelli, lest he be implicated in this assault on reason."

It's time for Governor Bob to let us know how he stands on the Cuccinelli Inquisition -- one way or another.  You're either for the right of researchers to conduct their work free from government harassment, or against it.  Stand up and be counted, Bob.

Jefferson insisted in the last year of his life that the university would be "now qualified to raise its youth to an order of science unequalled in any other state; and this superiority will be greater than the free range of mind encouraged there, and the restraint imposed at other seminaries by the shackles of a domineering hierarchy and a bigoted adhesion to ancient habits."
- Willard Sterne Randall, Jefferson: A Life

Thomas Jefferson must be doing a Triple Lutz in his grave right now.  The author of the Declaration of Independence spent the last decade of his life focused on a project that serves as a fitting epilogue to all that he had contributed to the world.  If American democracy may be viewed as a vessel to channel the power of free thinking people to actively shape and improve society, the University of Virginia was Jefferson's experiment in how to train people to become precisely the kind of citizens that democracy requires.

Just as one day Adolph Hitler would epitomize the opposite of free society through the hideous invention of the concentration camp, Jefferson capped off a lifetime of molding the concept of democracy by designing its model institution and incubator, the public university.  So the University of Virginia is more than just one of the world's great centers of learning, more than the campus that the American Institute of Architects proclaimed in 1976 as "the proudest achievement of American architecture in the past 200 years."  It is also a symbol of the freedom of thought, of democracy - and of the great man who planted those seeds in Virginia soil almost 200 years ago.

This is the institution now under attack by Attorney General Ken Cuccinelli.